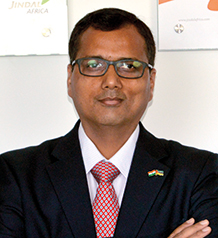 Chandra Singh was born in India in 1971. He received his bachelor of technology in mining engineering from the Indian School of Mines in 1993. He gained valuable experience in strategic design, mineral resource development, project management, operations, production planning, and logistics during his 21-year tenure as Country Head of Jindal Mauritania. Before joining the Jindal Group, he worked with such industry leaders as Aditya Birla Group, Ispat, Goa Mining, Dempo, and Chowgule. He is a leading expert in technical due diligence, reserve estimation, mine design, pit optimization, feasibility studies, and greenfield mineral deposit explorations.

Share on:
TBY talks to Chandra Singh, Country Head of Jindal Africa, on branching out into power generation, CSR initiatives, and the impact of restructuring.

What progress are you making in terms of meeting your targeted increase in annual production from 3 million to 10 million tons?

We were expecting some improvements in the market last year, but unfortunately that did not happen and we are still producing at an annual rate of 3 million tons. The currency has been a challenge in this country and it is influencing the whole business cycle. The price of oil has dropped to well under $50 a barrel as of late 2015. Costs are increasing, especially for labor, because we have to increase salaries. We realized it would be difficult to survive without focusing on adding value. In our case, we want to convert thermal coal into consumable energy, and are collaborating with EDM and the Ministry of Minerals, Resources, and Energy. We have made some substantial progress on that project. We have received environmental clearance for the power project. We are discussing with the EDM plans to establish a power-purchasing agreement, and with the ministry to secure concession agreements. Both initiatives are important for moving ahead on the power plant. Once these phases are completed, we will move on to securing financing. We will hopefully secure financing by the end of 2016, after which point we start the construction of this project. In the first phase, we plan a 150MW production capacity, which will carry an initial estimated price of $350-375 million. By the end of this year, a report will be generated and we will have a clear idea of how much investment it will require.

How does Jindal contribute to socioeconomic development in Mozambique?

We have already begun construction on our planned 577 houses. Under our agreement with the community and local government, we have 60 houses under construction, with 60-70% already completed. We try to engage more contractors to expedite construction. At the same time, we are also providing compensation of around 2,000 meticals per family to help support the local community. The mines employ 650 workers. Out of those 650, almost 200 people come directly from the local community. Our first priority is to engage more people from the community. This is a remote area and finding skilled labor in the community is difficult even though we have certain training programs as a part of our CSR goals. We trained 35 people last year, and every year we work with the community hand-in-hand to help equip the youth with specific training experience from a technical institute in Tete.

What impact does the company’s restructuring in India have on the operations in Mozambique?

We need support from our parent company in India. Of course the impact is there, but we try to optimize our cost here so that our dependence on India is minimized. We have a minimum of $2 million that we need to sustain our operations here. I do not foresee any major problems as a result of the restructuring because this is a small business compared to our overall operation. Our current investment in Mozambique is just $250,000 in the context of an $18 billion company. We only generate 2-3% of the total group revenue, so the impact of the restructuring will be minimal.

Our plan is to sign the agreement and concession for the power plant in the next three to four months. As soon as that happens, we will move forward with securing financing for the project. These are the major two targets for 2016.