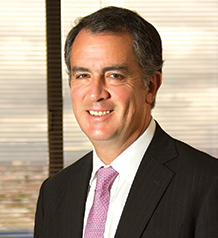 Step on the Gas

José Miguel Linares is the President of Drummond Ltd. in Colombia. The company is ranked number two in thermal coal and open sky mining. He has been with the company since the early stages of its operations in Colombia in 1990, directly participating in negotiations with the government for mining contracts and setting in motion the strategy for the purchase of real estate where operations are located. Having been the company’s Legal and Administrative Manager, he strategically transitioned into the Vice-presidency of Corporate Affairs. This extensive experience has allowed him to become an expert in the design, start-up and development of large mining, as well as mineral transport and shipping projects. A lawyer by profession, he graduated from the Universidad de Los Andes.

Share on:
TBY talks to José Miguel Linares Martí­nez, President of Drummond, on the FENOCO train line and gas facility developments along the Caribbean coast.

In 2014 you were one of the largest foreign investors in Colombia with investments reaching almost $450 million. How has this been allocated?

Essentially, our investments of around $450 million were focused on the port. We enlarged our on-land capacity and also installed a direct loading system, which has been in operation since late March 2014. Today we have a port with a capacity of 60 million tons. We have increased our rolling stock and maintain the same infrastructure for the mining operations, both in El Descanso and in La Loma. In time, La Loma will start to see a decrease in production, at which point we will switch the production focus to El Descanso north. Therefore, depending on the nature of the market, we anticipate opening El Descanso south, Rincón Hondo, and Similoa soon thereafter, once we get the environmental licenses.

How important is the FENOCO train line to realizing full port capacity?

It is essential, and we have a 41% participation in FENOCO. The railroad accounts for 100% of our coal movement to the port. With the constitutional court decision to restrict nighttime railroad operations in Bosconia, and thereafter in Algarrobo and Zona Bananera, capacity has decreased by more than 25%. And now that we cannot operate at night, mining operations in the area will be hard hit. This decision is having a major impact on us, but it also sets a bad precedent for the development of the railroads in general. The decision is supposed to stay until we implement certain measures that reduce noise. Those measures have already been taken by FENOCO. The final measure involves installing buffers, or vegetation, to provide noise insulation. And having received an approval from the environmental authority, it will move to the town tribunal. We should then receive approval to resume 24-hour operations. Last year, our total production volume exceeded 27 million tons with exports of around 24 million tons.

What are your forecasts for this year?

This year we are targeting production of around 30 million tons. Yet at this point, without knowing when the restrictions might be lifted, it is impossible to estimate with any accuracy. I believe that it will be difficult, though not impossible, to achieve our 30 million ton target if the night restriction is lifted soon. We have installed capacity at the mines to produce over 30 million tons.

You are currently in the process of establishing large gas projects on the Caribbean coast. What are your plans there?

We are developing projects for the production of coal bed methane gas both in La Guajira and Cesar. In La Guajira, we are working on an agreement with Cerrejon to coordinate the mining and gas related activities. This agreement has the support of the Minister of Mines. In the case of Cesar, we have advanced and we are just waiting for the environmental license that will allow us to start the production of gas. It will be the first coal-based methane gas project in Colombia.

Our mining plans are always undertaken taking into account the environment, developing and implementing state of the art technological solutions to mitigate environmental impacts. This is done on an operational level at the mines, with the railway transportation system, and with the direct loading systems at the port.

Do you feel that the current royalties system allows for effective wealth distribution in the communities that you work in?

We saw problems in the beginning and promoted the creation of a group to oversee how royalties were being spent in the region. We have supported this group, economically and training-wise, and the members are people from communities and universities. It is basically an oversight committee. Today, they have modified the law and the municipalities are receiving far fewer royalties. This has been a problem for all the mining and oil projects in Colombia, because the community starts to feel that the projects are not as important for them as they used to be, because they don’t receive as many royalties as in the past. Now the problem is that there are many municipalities in the country that do not have mining or oil projects, but that still need royalties to be spent on the development of their communities. We have always tried to work with communities and identify their needs, which while easy to say is difficult to accomplish given the sheer extent of their needs.