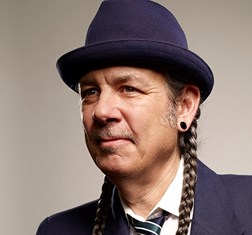 Steve DeAngelo is a pioneering cannabis entrepreneur, activist, author, and on-screen personality. He co-founded several iconic cannabis businesses and organizations: Harborside, one of the first six dispensaries licensed in the US; Steep Hill Laboratory, the first dedicated cannabis lab; the Arc View Group, the first cannabis investment firm; and the National Cannabis Industry Association, the industry’s first trade association. He currently serves as Chairman Emeritus of Harborside Inc, a vertically integrated California cannabis company. In recognition of these pioneering accomplishments, in 2015, former Speaker of the California Assembly and Mayor of San Francisco, the Hon. Willie L Brown called Steve “Father of the legal Cannabis Industry.“ His creative projects include a book, The Cannabis Manifesto; a Discovery Channel mini-series, Weed Wars; and a new weekly show, Ask Steve DeAngelo, on greenflowermedia.com. Stay tuned for upcoming announcements.

Share on:
“Jamaica's competitive edge is that it has one of the oldest, most mature, and wise cannabis cultures on the planet.“

What is your opinion about 2019 CANEx event?

Jamaica is home to one of the oldest, most mature, and wisest cannabis cultures on the planet. I have been fortunate enough to meet with some of the leading people here such as Niambe McIntosh, Peter Tosh’s daughter, who is interested in some of the work Last Prisoner Project is doing to release prisoners. Also, I met with a member of the Ethiopian Zion Coptic Church, which is an old collection of Rastas who got in a lot of trouble with the federal government a long time ago. I have been able to spend time with Jamaican people whom I find remarkable in their resilience and depth of soul. So CANEx has been a really wonderful conference. The Rastafarian tradition in Jamaica is very close to my own hippy tradition. We are all about nature, natural food and fabrics, and peace and love. So Jamaica is a comfortable place for me.

You have been an activist for cannabis legalization for decades. How would you characterize the current perception of medical cannabis from both a political and social viewpoint in the region?

There has been a tremendous amount of progress over the last few years, especially in Chile, Colombia, and Brazil. But what I would like to see more of in Latin America is our physicians really being educated about, understanding, and using cannabis for the potent therapeutic tool that it is, which is not happening yet. For example, in Colombia there is a lot of excitement about the financial and economic potential of cannabis and the idea that it will be produced for export to Europe. But there is not much consciousness or emphasis on providing that same medicine to Colombians or on educating Colombian doctors about medicinal cannabis. That is the missing piece that is really needed; once that happens it will be a catalysis for further reform.

From your standpoint where do you see the medical cannabis industry in five years?

First, the unfortunate direction for it to take would be the same direction as we have seen so many industries in Colombia, Jamaica, and all around the region go. Namely, having foreign corporations come in, take the raw materials out of the country, and then process them into value-added goods somewhere else. Under this scenario, most of the profit and economic benefit goes outside the country. The other direction to go in, and Colombia and Jamaica in particular have a huge amount of potential in this regard is not to send raw cannabis to other countries, but to instead build on the incredible brand power that these two countries already have in the international market.

Jamaica has huge ambition to leverage its medical cannabis potential, but it is not alone in this. There are around 100 players regionally investing in the industry today. Where is Jamaica currently positioned, and what should the local industry focus on to remain competitive?

“Jamaica’s competitive edge is that it has one of the oldest, most mature, and wise cannabis cultures on the planet.“ This is unique. You can grow decent cannabis almost anywhere in the world. But when a community has multi-generational experience with cannabis use, it affects the value system, and that is the case in Jamaica. So Jamaica’s competitive strength is to share that culture, which is about a reverence for life, nature, and preserving the planet for future generations, and being gentle, peaceful, and kind to each other. Not to mention the beautiful art, reggae music, food, and the Rastafarian ceremonies that Jamaica has created out of this cannabis experience and culture. The question is how you take that cultural legacy and transform it into a commercial opportunity. There are a few ways to do this. One of the things I always advise, and I advise it here in Jamaica, is to create local brands that reflect the unique history and culture that cannabis has in this country.

What do you see as the best way to balance the strong growth potential of medical cannabis cultivation with environmentally sustainable practices?

Growing medicinal cannabis in Jamaica, which is what I think should be done, is not going to have as much of an environmental impact as growing it for industrial purposes, which I do not think is appropriate in Jamaica. There is not enough flat land in Jamaica to grow industrial hemp. Plus, it is a small island, and there would be no way to prevent the pollen from that hemp from spreading around the island. The last thing we want is for the very precious and ancient strains of cannabis in Jamaica to get contaminated. But Colombia, for example, has some great places to grow hemp. What’s more, when you harvest a hectare of hemp you are sequestering four metric tons of atmospheric carbon. Then if you make that hemp into hemp concrete (hemp-crete) that you can build houses out of, as it dries it also sequesters additional carbon. So even without thinking about all the wonderful things we can make out of hemp from plastics to paper, textiles, food, fuel, and construction materials, just growing hemp is probably the best way we have to dial down global warming and start getting our planet back into balance.

What is your outlook for 2020 both for Harborside and the global medical cannabis sector?

Harborside has some exciting things coming up that we have never been able to do before. One of them is that the city of Oakland has given us a consumption license. This is something that is frequently done in Spain and in a couple of places in California. We are looking forward to seeing what cannabis looks and operates like in a public social space. We are also going to be opening up in new locations in San Leandro and Desert Hot Springs in California. The latter is one of only two locations in the state of California that are drive-through dispensaries. For medical cannabis in general what I hope happens in 2020 is that countries like Colombia that are now catering to pharmaceutical companies understand that there is a different pathway for developing cannabis medicines. The traditional pharmaceutical approach is to take a substance and break it down into its single molecule component parts. This is very expensive to do, and afterwards IP rights are granted, which makes it difficult for anyone else to do the same thing. The product ends up being expensive and usually has a whole range of horrifying side effects. There is an alternative with cannabis. Instead of taking the whole plant and breaking it into pieces, we can breed strains of cannabis that have the desired chemical profiles and do a simple whole plant extraction of that medicine. This is far less expensive, so instead of this medicine being confided to wealthy people in the first world, we can get it into the hands of everyone who needs it.