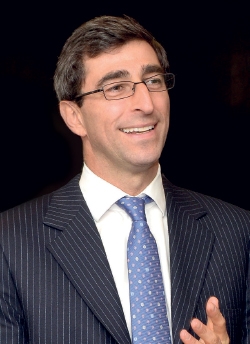 Juan Pablo Córdoba Garcés hold Master’s and PhD degrees in Economics from the University of Pennsylvania. During his professional career he has worked for the Inter-American Development Bank, the Ministry of Finance and Public Credit of the Republic of Colombia, the International Monetary Fund and the Deposit Insurance Corporation of Colombia FOGAFIN. Currently he is the President of the Colombian Securities Exchange.

Share on:
Since we met in 2012, what have been the milestones of Bolsa de Valores de Colombia (BVC)? This has been a difficult year, and I think that for Colombia it […]

Since we met in 2012, what have been the milestones of Bolsa de Valores de Colombia (BVC)?

This has been a difficult year, and I think that for Colombia it has also been one in which we have come from a period of great optimism back down to reality. Reality in the sense that the world is still facing a highly complex environment with much residual uncertainty regarding the monetary policy needed to develop the right amount of economic growth in countries like the US, and in Europe. The exchange has been affected, as have most emerging markets, but nonetheless in relative terms Colombia has done well. In fixed income instruments, the correction in interest rates has been significant. There has been a correction of around 150 basis points in Colombian securities, which is fairly large. All of these conditions put us on a solid, but more realistic footing. In terms of liquidity and monetary conditions locally, Colombia is still enjoying a favorable environment, and the low interest rates are greatly positive for investment. Colombia is probably the country with the highest rate of investment as a percentage of GDP, close to 29%. I consider this positive, and it is this that will drive growth over the next two years. Thus, having low interest rates at levels that Colombia has not been used to, is highly positive news for the local economy moving forward.

How successful was the MILA Day held in New York in mid-2013?

It went very well, and we had the opportunity to reach out to the New York investment community and tell the story of MILA, not only from the BVC’s, but also from the government’s point of view. We had the participation of regulators from the three countries, and also saw the Chilean Ministry of Foreign Affairs join in, indicating the global strategy of those countries that are already linked via MILA. Our conclusion is that this is a story that you need to tell over and over again because the audience still needs to be more educated to see the benefits. We are continuing to work under the MILA umbrella to further the depth of integration.

You are focusing on e-trading: a new way of doing business. What is your opinion of these technological improvements?

We launched e-trading in Colombia in 2009. Despite being a slow start, the brokers are now investing in new technologies, which I think will make it easier for investors to reach the market. There has been some discussion about the costs of doing business through electronic trading platforms, and we are working with the broker community to make it more efficient for both clients and brokers to have access to the market through e-trading. Currently, only 4% of trading is done via e-trading. We reached a peak of 7%-8% at some point in 2011-2012, but we need to work to further this rate, which we believe will really empower investors in the local market.

What do you imagine to be the role of the BVC in providing the framework you are describing?

In terms of the infrastructure sector alone, over the next five years we are talking about our need to mobilize $40 billion-$60 billion. This is where the capital markets have a crucial role to play. We have a number of listed construction companies and others that will probably become listed to raise capital through the exchange. As the banking sector will also be providing resources to these new initiatives in the infrastructure sector, it requires long-term funding so that it can match the length of the programs with the maturity of the debt raised. We have a direct role to play, particularly in channelling resources to the investment sectors that are going to be demanding resources over the coming years. We are also moving forward and empowering investors to seek more information and educate themselves to become more familiar with the issues that are important when investing in the markets. We want to have many more investors, but we also want to have educated and responsible investors who are aware of what they are doing.