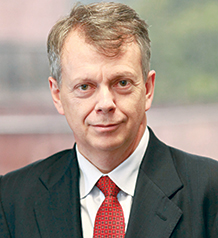 Ricardo Ávila is the Editor-in-Chief of Portafolio, Colombia’s largest and most influential business daily, as well as the Deputy-Editor-in Chief (Opinion) of El Tiempo, the most important newspaper in Colombia. An economist by training, he holds a masters’ degree from the University of Pittsburgh, as well as a graduate certificate in Latin American Development. Earlier, Ávila was Editor-in-Chief of Cambio, at the time one of Colombia’s leading weeklies. A winner of the National Prize of Journalism Simón Bolí­var, he has taught econometrics and economic journalism at Universidad Javeriana in Bogotá.

Share on:
TBY talks to Ricardo Ávila, Editor-in-Chief of Portafolio, on the factors behind Colombia's steady growth, the need to adapt to the web, and his predictions for the paper.

What underpins Colombia’s growth despite the negative factors it faces?

Colombia has been affected by the same issues that have confronted other Latin American countries; therefore, it is by no means an exception in that regard. Nevertheless, we have been able to sustain growth at a higher level than other economies in Latin America, even Brazil. While 3% is not something to be proud of, it is still better than being in a recession. The reason Colombia can grow is that internal consumption is strong. Latest figures show that growth might even be above 3% in 2015 and 2016. This is also due to the fact that the employment situation in Colombia has not deteriorated the way it has in other countries in the region. At the same time, due to a lucky coincidence, the ambitious infrastructure development program that the government has undertaken is picking up pace as a counter-cyclical policy, so that is also keeping the economy churning just at the right time.

To what degree will the signing of a peace agreement between FARC and the government help improve Colombia’s image abroad?

There is no doubt this country will be better if a peace agreement is signed with the oldest guerrilla group in the country. At the same time, the effects will be slow in terms of immediate gains. We need time and more agreements to be made, but if things go to plan, we can expect more investments being made in rural areas than were made in the past, and that will be a huge gain for the country, especially if we can get our act together in terms of agricultural production. But at the same time, I do not believe those who think that a peace deal will lead to an added 2% growth in GDP. That is too optimistic. A peace deal would be the end of the beginning rather than the beginning of the end.

How has the company adapted to the online trend and what steps have you taken in this respect?

We are always trying to push the brand on different platforms, be it on paper or digitally. Our online presence is very strong, and we are one of the top-five websites for economic and business news in the Spanish-speaking world. We are also active in mobile phones through our Portafolio app and push our brand in terms of organizing meetings and events. So we have a much more diversified offering compared to the past, when it was only about our printed media. We are not just a newspaper anymore; we are a brand. That said, the majority of our revenue still comes from our printed offering, but we see incredible growth also in online and mobile traffic and revenues. The information cycle has changed dramatically. Instead of producing new news and content every 24 hours, we have to produce it all the time, constantly updating our content.

It will be a stronger brand, with basically the same platforms that we have today, but with changes in which part of the brand receives how much of overall revenues. Print will recede somewhat from being our main breadwinner. When looking at traditional media, business journals have done best with the traditional print media model compared to other kinds of journals, so that gives us a bit more room to breathe. As safety has improved, more companies have been willing to open up and talk more candidly to business journals in Colombia, showing greater willingness to share information with the media and our readers. It is much more open now than before, audiences are much more educated than they were, and the size of the middle class has doubled over the last decade or so; all these factors have improved numbers, revenues, and readership for us, and we will continue to see this improving trend into 2020 and beyond.