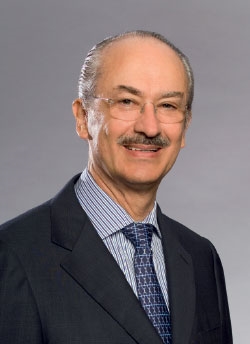 Francisco Gí­l-Dí­az is currently the Executive President of Telefónica Mexico and Central America. After earning a BA from ITAM and a Master’s degree and PhD in Economics from the University of Chicago, he spent three years in the private sector as CEO of AVANTEL. His public service experience has alternated between Banco de México, where he started as an economics analyst before eventually heading up the Research Department and became a member of the bank’s Board of Governors, and Mexico’s Treasury Department, where he held the positions of General Director of Planeación Hacendarí­a, General Director of Revenue Policy, Undersecretary for Revenue, and Treasury Secretary.

Share on:
The much-awaited reforms in the Mexican telecommunications sector were passed into law in June 2013. What are your expectations? This is the first time that there has been a reform […]

The much-awaited reforms in the Mexican telecommunications sector were passed into law in June 2013. What are your expectations?

This is the first time that there has been a reform that deals with the different issues needed to create changes in the telecommunications sector. The barriers to entry in this market have not budged for many years; they have existed for a long time and have made competition difficult. The latest reform does contain the necessary changes and establishes asymmetrical regulation. This involves treating the incumbent differently, whereby access has to be provided on an equal basis and at a reasonable cost with prompt delivery. The new legislation also eliminates exclusivity regarding suppliers of terminals and on contracts that are frequently negotiated based on the incumbent’s size and power. For example, I am referring to the providers of smart phones that give the incumbent a window of two or three months; a period within which other service providers cannot have access to those phones and, therefore, suffer a competitive disadvantage. Exclusivity also concerns distribution, and there are many ways that distribution chains can be forced to give the incumbent exclusivity, such as contracts designed so that commercial chains obtain a greater retribution if they allow only the dominant firm to distribute its services. It also refers to the provision of the last mile to competitors by the incumbent. This last issue has always been a problem. All these elements have been considered in the constitutional reforms. These reforms will certainly break the monopoly in Mexico, but in order for this to be implemented in practice and have the effects desired by the President and congress, we need by-laws that ensure the implementation of constitutional reform, which has not yet happened.

How has the company managed to win a 20% market share?

It has been a combination of factors, but key among these has been the construction of a network that has national coverage and can provide excellent quality of service. When comparing the performance of the different networks, ours invariably ends up on the top in terms of speed and reliability, and it is also top in terms of quality of service and geographical coverage. We have also been creative in designing campaigns and products that are attractive to our customers; we have tariffs and products that are quite original—and frequently copied by others. By the time our commercial innovations are copied, we are generally ahead in the acquisition of customers. Another innovation that we have been able to achieve is in technological progress and the ability to introduce it. For example we are the first and only company to have introduced voice messages that are automatically converted into text. We were also the first to introduce value-added services on our smartphones. Being the first to introduce innovations is a true advantage in this market, and it is how we were able to establish a foothold.

How does Mexico fit into Telefónica’s operations within Latin America?

We are comparatively small in relation to the size of the market; our revenue is about 11% of the wireless market. That is exceptionally small, but we are relatively larger if you consider other criteria. We have 20 million customers and a large investment in the geographical area that makes us larger than other medium-sized firms in the telecommunications industry. However, we still have a long way to go if we want to become true competitors.