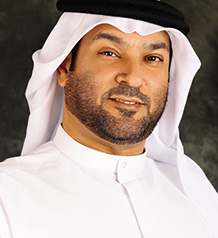 HE Sultan Abdullah bin Hadda Al Suwaidi has been Chairman of the SEDD since 2012. Prior to being appointed Chairman, His Excellency served as Secretary General of the Sharjah Consultative Council from 1999 to 2012, and Director of Membership Affairs and Transactions at the Sharjah Chamber of Commerce and Industry from 1988 to 1999. Since 2012, he has been a member of the Sharjah Executive Council, the Emirates Standardization Authority Council, and the Economic Coordination and Cooperation Committee. His Excellency holds a bachelor’s degree in public administration/politics from UAE University in Al Ain.

Share on:
TBY talks to HE Sultan Abdullah Bin Hadda Al Suwaidi, Chairman of Sharjah Economic Development Department, on the resilience of Sharjah's economy and building on its well-diversified foundations.

The last couple of years have been eventful, with socio-economic instabilities in the Middle East and across the world and commodity prices having an impact on many industries. In light of all this, how has Sharjah’s economy performed so far in 2016?

Over the year the global economy has witnessed a decline in growth rates to less than 1.5% with the economic recession in the EU, a key partner of the UAE, and with the significant decline in the growth rates in China as well as the growth in the US economy, not to mention the drop in oil prices and its subsequent impact on the Arab region. Meanwhile, Sharjah’s economy maintained rates of standard evolution and cumulative growth of more than 10% over the past 10 years. Sharjah recorded, over the last two years, a growing number of new companies establishing themselves, with growth rates at 4.9% in 2014 and 4.6% in 2015. In addition, the renewal of licenses increased to 4.3% and 6.4% in 2014 and 2015, respectively. Such indicators helped significantly in the stability of Sharjah’s GDP during the last two years. However, as for the growth and its impact on commodity prices and the volume of industrial production, the reports that are issued from SEDD showed that the licenses related to the industrial sector hit a growth rate of 6% and 8.3% in 2015 and 2014. Moreover, Sharjah’s inflation rate does not exceed 4%, which is considered acceptable and healthy.

How important is it for the Sharjah authorities to implement partnerships and collaborations with the private sector?

Sharjah has managed to create a sophisticated, diversified, and increasingly knowledge-based economy in a region known for greatly relying on oil. What has been the key driver behind this achievement?

Sharjah has been considered the country’s cradle of traditional educational institutions and the city of culture for centuries. It has a unique and well-known university city that teaches more than 45,000 students and many educational centers. It has achieved this through wise leadership, and the government continues to pay great attention to education and believes that it is key to the development of any civilization or nation.

What is your outlook on the long-term of Sharjah’s socio-economic development, and which sector will be SEDD’s main focus over the next few years?

There is no doubt that the small and micro enterprises sector will be among the priorities of the department. Also, we expect a remarkable development in the industrial sector judging by the increase in the number of industrial establishments and its work to provide the necessary infrastructure with the concerned departments and authorities in Sharjah. It is worth mentioning that SEDD has a wise vision to improve the Emirate’s economic knowledge and to cooperate with the private sector as well as the universities in the field of development in order to benefit from their innovation, creativity, and research, which will help to improve the Emirate’s business environment. The department is also a member of the Industrial Coordination Council, which aims to apply the green industry policy to provide more working opportunities and to increase the growth of industries and its contribution to GDP, which is expected to reach 20% by 2021, as well as to focus on the green economy and the next generation of industries.