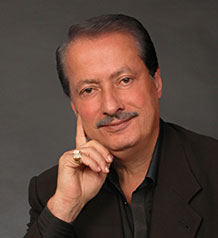 Elias Saad is a Lebanese-Nigerian real estate builder and developer with over 40 years of experience. He is currently Chairman and Senior Executive for several companies in various business sectors. Having studied Electrical and Mechanical Engineering in the UK, he has worked with a number of firms, and is currently Chairman of Eko Pearl Towers.

Share on:
"Nigeria is a land of opportunity begging to be believed in."

Can you tell us the details about the Eko Pearl Towers and how they came to be?

I have been in Nigeria since 1970. Following a period working for another company, I decided to strike out on my own. My initial business forays were into a restaurant, a poultry farm, and then a logistics company, after which I started a printing and packaging company. In 1999, I ventured into the exportation of cocoa, and in a year when the national export figure was 150,000 tons in total, I managed to export 55,000 tons single-handedly. This progression of trade put me in an increasingly strong position in the market. My operations were growing, and I delved into road and civil construction backed by my quarries. Further down the line, I became the main supplier of the many rocks that form the first reinforcement wall of Eko Atlantic City, a city created by Mr. Ronald Chagoury to protect Victoria Island from future erosion that has degraded the coastline around Lagos over the last decades. Being the first residential property developer in Eko Atlantic City can be considered taking an uneasy step but I am a risk-taker by nature and find that these strategies pay off. This project costs $600 million dollars, and initially many had their doubts, but I had my share of supporters who saw its validity. The Towers project will comprise exclusively of deluxe apartments and will be developed at land level on 22,700 sqm at the harbor front of Lagos’ innovative Eko Atlantic City. The five Towers are a collection of two-bedroom, three-bedroom, and Penthouse-type apartments with sea and marina views for residential and investment purposes only. The Towers are named after the most precious Pearls in the sea; Black, Champagne, Aqua, Indigo, and White. My investments have secured a valuable reputation regarding Eko Atlantic, and an increasing number of investors are aligning themselves with my projects. Construction and real estate are my main lines of businesses, and Eko Atlantic has done extremely well thus far, although it has not even scratched the surface of its potential. Regarding the first Tower, Black, it is completely sold, while sales for the second Tower, Champagne, are already at 30%. At seven years, I am a relative newcomer to Lagos, but I have lived in Nigeria for over 46 years. I am developing elsewhere in the world as well. For example, I recently developed a multiphase apartment project in Bangladesh where I am building around 4,000 apartments. I am considered one of the most reputable independent developers in Beirut, Lebanon under the umbrella of my company, (Elias Saad Leading Association (ESLA) and have completed 27 construction projects consisting of towers, villas, and office buildings.

When you saw the plans for Eko Atlantic, what prompted you to take that risk from the very beginning?

Nigeria is a land of opportunity begging to be believed in. All of the funds we have invested here, we invested with confidence. We believe in Eko Atlantic not only because of the people behind it; the Chagoury Group; His Excellency Mr. Gilbert, and Sheikh Ronald Chagoury, but also because it will become the future of Africa. As markets in Africa develop, this development will emerge as one of the central economic centers in the region and continent.

How have you used your expertise in other areas to develop this project?

Right now I run companies in the fields of piling, logistics, civil and road construction, real estate development, electro-mechanical engineering, industrial baking, ceramic manufacturing, and telecommunications. I never work alone; I use my personal expertise coupled with my very professional team. They provide me with briefings on a daily basis. In less than four years, another company that I own that manufactures tableware and ceramics will be the largest global producer of these products. Our ceramic products are already well established in markets such as the US, France, the UK, and most of the Arab countries. This year we are hoping to build yet another ceramic factory as we see a growing market.

Following the most recent electoral successes, there seems to be a renewed interest in Nigeria. What have you noticed since the election?

As a Nigerian, an expatriate, and an investor in the country, my perspective is multifaceted. I believe that the new government will open up the country, improve infrastructure, attract more foreign investment with confidence, and will better standard of living of Nigerians. President Muhammadu Buhari is the man who will see that this happens.

You have already sold the first Tower and partially the second Tower. Is most of the interest from Nigerian investors?

More and more, Nigerians are looking to invest in their homeland. I am delighted to be able to offer this opportunity and to give Nigerians a legitimate reason to seize this opportunity. I myself am investing in Nigeria with finance from abroad for what will be a bright future. Where our projects are concerned, 99.9% of interest stems from Nigerian investors. I am working here for the Nigerian people, and there are 180 million of them.

Having spent most of my life in this beautiful country, I am fortunate to realize that Nigerians are the most resilient and optimistic people you may come across. In the coming year, I am convinced we will move forward to a better Nigeria and higher to a more positive level. I myself am moving forward with optimism and will be introducing to the market several new projects including a 37-floor corporate tower to rise from the sands of Eko Atlantic City. It will provide office space with restaurants and high-end retail shops.