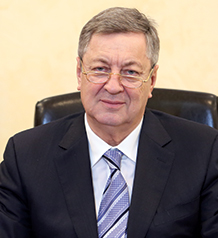 Minister, Energy of the Republic of Kazakhstan

Vladimir Shkolnik has been the Minister of Energy since August 2014. He began his career in 1973 at the Mangyshlak energy plant as an Engineer-Physicist after graduating from the Moscow Engineering-Physics Institute. He also has a PhD in Physics and Mathematics and is a member of the Kazakh National Academy of Natural Sciences.

Share on:
Despite the fact that the Republic of Kazakhstan is abundant in traditional energy sources, such as oil, coal, gas, and others, we fully understand that these energy sources are non-renewable.

Production at the Kashagan deposit has been delayed until 2016. What is the Ministry’s strategy in terms of compensation for oil production at other sites?

It is widely known that after the start of oil extraction at Kashagan in September 2013 several leaks were discovered in the sour petroleum gas piping, which led to a complete halt in production. The inspection of the piping system indicated that repairs are necessary for the proper operation of the facility. In order to ensure economic growth and price stability for raw hydrocarbons, the Ministry introduced corrections into the resolution entitled “On establishment of uniform rules of rational and complex usage of subsurface resources during the extraction process,” which proposes the increase of norms of selection of raw hydrocarbons to 10% per year instead of 2% per quarter. This measure was part of other projects aimed at increasing economic growth and stability by the end of 2014, approved by the protocol of the Prime Minister’s council in September 2014. Moreover, the ministry is working on including into the contracts of subsurface resource developers the obligation to deliver raw materials to the internal market of the Republic of Kazakhstan.

Kazakhstan has expressed its intention to build its first nuclear power plant. What is the potential for nuclear energy here and what impact will it have on the country’s development?

Nuclear power, compared to traditional energy sources, and especially coal energy, holds quite a few convincing advantages. Chief amongst them is the low cost of energy generation and ecological benefits, which makes nuclear power one of the most competitive sources of energy in the world. Today, the Republic of Kazakhstan has all the right elements to develop its nuclear power industry. To elaborate on this idea, our key advantages are: an abundance of geologically explored uranium reserves; a developed industry in uranium extraction and processing; developed nuclear science; a sufficient number of qualified specialists in the area; and a legal base to regulate the questions of nuclear energy usage according to the requirements of IAEA. The development of the nuclear energy sector will allow us to use fuel and mineral resources in a balanced way, increase the export potential of the country, ensure the green benefits of power technologies, develop nuclear technologies for usage in different sectors of the economy, and boost the socio economic development of the country’s territories in the regions where nuclear power stations are to be constructed.

What significance do you attach to renewables?

Despite the fact that the Republic of Kazakhstan is abundant in traditional energy sources, such as oil, coal, gas, and others, we fully understand that these energy sources are non-renewable. Moreover, their usage is harmful to the environment, and Kazakhstan is also full of renewable sources of energy, such as hydro, wind, solar, and others. Therefore, not making use of these resources would be unreasonable. According to the “Kazakhstan 2050: a new political course for a successful country” strategy, President Nazarbayev set out his goal to develop alternative and renewable types of energy. By 2050, such sources will provide for no less than half of all energy used among the population.