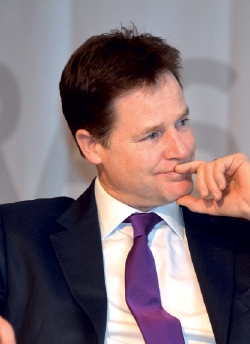 The Right Honorable Nicholas Clegg, Deputy Prime Minister of the United Kingdom of Great Britain and Northern Ireland, holds a Master’s degree in anthropology from Cambridge University and a second Master’s degree in European affairs from the College of Europe. From 1995 to 1999 he was employed by the European Commission overseeing aid projects in Asia, and was also a trade negotiator with China and Russia. In 1999 Clegg was elected Member of the European Parliament for the East Midlands, later acting as the Liberal spokesman on trade and industry. Then in 2005 he was elected MP for Sheffield Hallam, becoming European spokesman in Charles Kennedy’s front bench team, and subsequently the party spokesman on home affairs. In 2007 Clegg was elected leader of the Liberal Democrats.

Share on:
Could you comment on the mutual commitment that exists between the UK and Colombia? Both governments understand the potential opportunities that exist to increase trade and job creation. Two years […]

Could you comment on the mutual commitment that exists between the UK and Colombia?

Both governments understand the potential opportunities that exist to increase trade and job creation. Two years ago, we committed to doubling our bilateral trade by 2015. Since then, we have worked tirelessly to achieve this objective. And I am pleased to announce, still a year from the target date, that we have reached our goal. The UK has become the second largest foreign investor in Colombia and is increasingly present in trade, in business services, automotive, and retail, as well as in the machinery and equipment sectors.

What is the growth potential of this relationship?

This is still just a fraction of the growth we could achieve. Only 1.4% of UK exports come to Latin America as a whole. For example, a market the size of Colombia is roughly equal to that of South Africa. But despite this fact, there are many more British companies in South Africa than in Colombia. Now is the time when Colombia is emerging as one of the leading markets in Latin America, with an economy that is increasingly open; it has a large labor force, and a huge customer base that has a strong interest in British goods and services.

What do you perceive as the UK’s strengths in advancing this bilateral relationship?

The government of Colombia has committed to ambitious reforms that will open up the economy and ensure a more stable and prosperous future. So, it’s time for us to improve our game. That’s why I’m here at the “Business is Great” event as one of the highest representatives of the British government ever to visit Bogotá. I have also brought the largest delegation of high-level British companies ever to have visited Colombia. To show that we mean business, the governments of the UK and Colombia are establishing an even higher objective—to increase our bilateral trade to £4 billion by 2020. This would triple the size of UK exports to Colombia over the next six years.

Could you elaborate on the main agreements that will help you meet your goal for 2020?

Firstly, in energy, UK oil and gas company Amerisur Resources will be investing $700 million over the next three years to help Colombia meet its energy needs. The British company BG Group has also signed an agreement with Shell to acquire a 30stake in Shell’s oil exploration areas off the coast of the Guajira. Secondly, in the transport sector, with a new agreement for £47.3 million, British railway specialist Holdtrade Atlantico will help Colombia transport its goods more easily and competitively around the world.

Finally, Colombia is playing a decisive role in determining the objectives of international sustainable development areas for the future. British company Lifesaver, which provides water purification systems, is to participate in a program valued at £30 million to provide drinking water to the poorest communities of Colombia. Also, the engineering firm Atkins has won a $500,000 tender to produce sustainability plans for the city of Cali through the Eco City Program. These are just some examples of the range and variety of British companies and organizations that can succeed in Colombia. This includes education and research: these are two fundamental areas for us to develop the skills and innovations that will strengthen the future growth areas of our countries.

Regarding education and innovation, what is your vision for the development of the mutual relationship?

As a graduate of the London School of Economics, President Santos knows that the UK is home to some of the world’s best universities, colleges, and schools. We have a wealth of knowledge available to help Colombia in its reforms and invest in its education system. I am pleased to announce that, with the generous support of Amerisur Resources, we will now triple the number of Chevening scholarships to study in the UK.

I am also pleased to announce a new fund of £4 million for science and innovation in Colombia, which will strengthen research collaboration between our two countries. The fund will go hand in hand with our new Innovation Award. This award recognizes the best research collaborations between the UK and Colombia and will focus on finding solutions to the major social challenges facing Colombia, thus allowing people to find more information about how to participate in trade between the UK and Colombia.