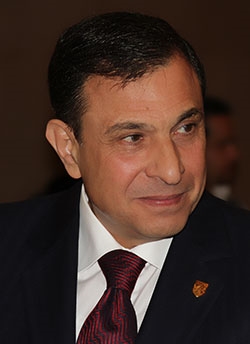 Professor Amr El-Adawi became President of BAU in August 2006. He is a Professor of architecture at the University of Alexandria, where he se’ved as Dean of the Faculty of Engineering (2005-2006). Prof. El-Adawi is a consultant for the architectural design unit at the office of the Minister of Culture and for Mubarak City for Scientific Research and Technological Applications. He is also member of the supreme committee for the promotion of academic staff in Egyptian universities and of the High Supreme Court for Values in Egypt. As President of Beirut Arab University, El-Adawi has been working on the restructuring of the university administrative system, the improvement of academic programs, and the expansion of the university’s physical facilities.

Share on:
"Our goal is simple: to secure better education for the largest possible student body."

BAU was ranked 35th among the top 50 universities in the Arab World, in the QS University Rankings for 2014. To what do you attribute this position?

During the past few years, the university has undertaken ambitious development of the academic curricula and the laboratories of various faculties. In the process, BAU has attained a number of international accreditations by prominent institutions of a number of academic programs. Currently, we are in the process of attaining further accreditations. We have also taken steps toward the recruitment of academic staff-members from various fields of specialization and different nationalities, while maintaining our ability to recruit non-Lebanese students and encouraging scientific research. These steps will help in improving the BAU’s ranking. Being included in a list of rankings is desirable, however, the problem is that there are various classifications that are issued without reliance on well-documented information by an informed source. This entails that universities attain higher or lower rankings along this continuum. We have, therefore, established direct contact with classifying institutions, who take our comments into consideration, since we deem our University to be worthy of a higher ranking.

What role does the research and development play at BAU and what are the most significant ongoing research projects?

A main item on our 2013-18 five-year strategy is to support scientific research. We rely upon this objective to encourage researchers and offer up-to-date studies and research. The most important thing for us is not to limit ourselves to a purely research-oriented process, but instead to direct researchers toward studies that are relevant to the concerns of society. Accordingly, we have created a wide network of contacts with the civil society, as well as local institutions and ministries, and we have signed diverse MoUs with them. In addition, I have appointed a Dean of Postgraduate Studies and Research, whose main responsibility is the implementation of this strategy. Today we have 10 faculties and over 35 programs, highly qualified academics, and well-equipped laboratories. The spectrum of research may be varied and relevant to the needs of the community. Ultimately, we are a university, and our principle responsibility is to serve the community, not only at the educational level, but in every other aspect as well. For instance, the Beqaa Valley is an agricultural area in need of development where we established the Research Center for Environment and Development, which has already launched ambitious research projects and courses and is interacting with local communities there. We will offer financial funding, the necessary laboratories, and any other support the study may require.

“Our goal is simple: to secure better education for the largest possible student body.”

How would you describe BAU’s relations with the Lebanese business community?

Our ties with businessmen are solid; they have offered great training and internship opportunities to our students at their establishments. The university is for them a trustworthy source of human resources, due to the high academic level and efficiency of our graduates. One example was a generous donation to the Petroleum Engineering program at BAU from an international oil company, consisting of software used by different petroleum companies. We launched this program two years ago, and it has greatly developed our students’ abilities, and improved their chances on the job-market of this emerging sector in Lebanon. Another example of collaboration can be seen in the pharmaceutical laboratories at BAU, which have been certified by pharmaceutical companies as adequate to perform tests on drugs.

What is the significance of having notable alumni, such as HE Abdullah bin Nasser bin Khalifa Al Thani, in terms of building trust and gaining recognition?

The graduates of BAU, ever since its establishment, have managed to assume leading positions in the Arab world. There are tens, indeed hundreds, of successful personalities in different countries, such as Sheikh Abdullah. This proves that the role of BAU is significant in terms of securing influential academic staff members, in developing students’ personalities, and encouraging students to take the initiative in the communities they belong to. The aim is to be able to effect positive change in all positions they occupy. The achievements of our graduates, who number over 100,000 have been making a difference in development, science, administration, and politics, in particular in the Levant.

Lebanon’s status as the educational capital of the Middle East is being challenged by ambitious projects in the Gulf region. What steps should be taken for Lebanon to retain this well-earned title?

As the President of BAU, my chest swells when I see any form of progress achieved by an Arab university. Our aim was never to achieve profit, for we are a non-profit institution. The mission of BAU, and the objective for its establishment, is to qualify future generations. As for competitiveness, we will continue to exert our best, for we have an advanced educational system in Lebanon. Some 22.5% of our students are non-Lebanese, mostly of Arab and Gulf nationalities. We continue to consider Beirut the center of tertiary education, and though we may not be wealthy, we have the will, the ability, and the efficiency to continuously develop ourselves and compete not only with universities in the Gulf area, but internationally, too. We have attained international accreditation by institutions that have accredited others worldwide. I believe that other universities in Lebanon are well reputed, and it is this that maintains Beirut as the capital of education. Personally, I hope that every Arab city can become a pioneering capital of higher education, as this is the mission we all seek to fulfill as academics, and as BAU in particular, and it is what will shape our respective countries’ fortunes.

Our goal is simple: to secure better education for the largest possible student body. BAU is a non-commercial institution, and has no stocks or investors. It is an institution affiliated with a charity, and the revenues of the university are channeled toward its development. We also managed to expand our presence in Lebanese territories; thus, we opened a branch in the north of Lebanon, which is considered among the poorer parts of the country in need of development. We thus offer education and serve the community in scientific research for a larger section of society. The University also functions as a consultant in a variety of engineering projects. Our strategic plan for the upcoming five years highlights restructuring the governance system strategy, supporting research and student services, deepening public engagement, enhancing international relations, and diversifying financial resources.