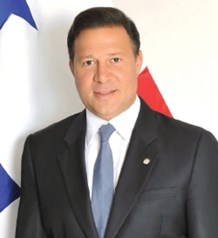 Juan Carlos Varela graduated from Georgia Tech University with a degree in industrial engineering. He was elected Vice President of the Republic of Panama in July 2009. On March 17, 2013, he became the presidential candidate for the Panameñista Party, and on August 25 of the same year he was proclaimed candidate for the Alliance of the People First (Alianza El Pueblo Primero), made up of the Panameñista and Popular Party, with the support of independent sectors of the country. On May 4, 2014, Varela was elected President of the Republic of Panama for the 2014-2019 constitutional period.

Share on:
"Panama does not deserve to be singled out on an issue that plagues many countries."

Despite their name, the Panama Papers are not mainly about Panama. They are not even primarily concerned with Panamanian companies. The more than 11 million documents, illegally hacked and relating to previously undisclosed “offshore” corporations, are roiling the world with revelations of the vulnerability for rampant abuse of legal financial structures by the wealthy.

They are unfairly called the Panama Papers because this particular trove of documents came from a single law firm based in Panama; however, the problem of tax evasion is a global one.

Panama does not deserve to be singled out on an issue that plagues many countries. But we are willing to accept the responsibility for fixing it, in part because greater transparency is ultimately a continuation of reforms we have recently undertaken. The world must tackle this problem collectively and with urgency, and Panama stands ready to lead the way.

The scope of the information is breathtaking, with the files include information on more than 14,000 banks, law firms, corporate incorporators, and other middlemen from more than 100 countries, which is just a small part of a worldwide industry that harbors trillions of dollars. That some can rig the system to hide their wealth is not merely unjust, it also harms global development by siphoning off revenues that could be directed to education, healthcare, and infrastructure.

Contrary to media reports, Panama does not make special allowances for “offshore” structures. The association of Panama with offshore activities comes from the fact that we tax only income derived from within Panama, not from without, which remains taxable pursuant to the laws of relevant jurisdictions. These rules, based on laws in New York and Delaware, originated in 1927 and are common today. While these laws have been buttressed by additional regulations, they can still be manipulated for illicit purposes.

Under previous governments, Panama was no doubt a target of money launderers. Today, Panama is committed to adopting all transparency reforms needed to satisfy the international community. In the 21 months of my administration, Panama has taken steps to increase transparency and strengthen its financial legal systems. We developed a robust treaty network that allows exchange of information. “Know your client” regulations were substantially enhanced and extended not only for financial and corporate providers, but also for key non-financial industries vulnerable to abuse. And as of January 2016, we require identity certification of shareholders of all Panamanian companies.

I have announced a commitment to the automatic exchange of financial and corporate information, and we have proposed steps that we believe are consistent with the goals of the international community, including the Organization for Economic Cooperation and Development (OECD) through its Common Reporting Standards proposal. These reforms have been recognized and validated by the international community, including the Financial Action Task Force on Money Laundering, which cited Panama’s “significant progress” in combating money laundering when it removed us this year from its gray list. Removal from that list occurred in record time.

Our financial transparency ranking with the non-governmental organization Tax Justice Network has steadily improved since 2013, and we now rank well ahead of Japan, Germany, and the US. We have also progressed positively in a peer review by the OECD’s Global Forum for Transparency and Exchange of Information for Tax Purposes. These reforms in Panama, along with other international efforts, have been paying dividends.
Still, more work is needed. I have announced that Panama’s Ministry of Foreign Affairs will create an independent committee of international experts to evaluate our policies, determine best practices, and propose measures that will be shared with other countries to strengthen global financial and legal transparency. We expect their findings within six months. Panama will continue to cooperate with other jurisdictions to prosecute offenses outlawed in our Criminal Code, and we will continue to exchange financial and legal information to comply with the many treaties we have ratified. We also reiterate our willingness to engage in dialogue with the OECD and its Global Forum with respect to reaching financial transparency agreements that can further the economic development of our countries.

After decades of dictatorship, Panama is a stable democracy committed to the rule of law and is home to the regional headquarters of more than 100 transnational companies. To fulfill our democratic evolution, we must have a government committed to transparency, accountability, and the separation of powers. Our response to the current crisis will test our resolve and our potential.