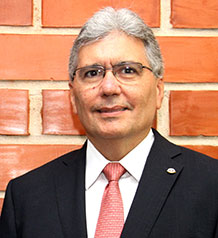 Irvin A. Halman obtained a BSc in Engineering from the Worcester Polytechnic Institute, US, an MBA from the University of Rochester, US, and participated in the Kellogg Business School Advanced Management Program at Northeastern University in Chicago. He began his career in product development at the Photographic Technology Division at Eastman Kodak Co. in Rochester, and currently works as General Administrator of the National Authority for Government Innovation (AIG) in Panama.

Share on:
"We will offer new e-government online transactions in 2016."

How has AIG promoted the optimal use of ICT since its creation in 2009?

AIG uses a three-pronged approach. We have increased connectivity for the population through 1,156 Wi-Fi hotspots. This has allowed citizens, especially in the rural areas, to connect to government services, education, and small business. We are expanding that program and increasing coverage by at least 30% in its new version. This is one of our leading projects for 2016, and we will soon have a tender to establish a multi-operator network that will increase coverage and bandwidth for more applications in education, small business, government services, agriculture, and logistics. The network was used primarily with laptops, and now about 80% of the network is being accessed through mobile devices, so we also have a parallel plan to develop more mobile applications for government services. Each agency within government will develop its own applications with AIG’s support. We recently launched Panama Apps, a mobile app that catalogues all of the official apps into a single trustworthy source for installing government apps. This is a first of its kind in the region and perhaps even in the world. Government-shared services through ICT-based platforms is our second pillar. We are redesigning our private cloud infrastructure and we are already launching new e-government processes that will contribute to Panama’s competitiveness by simplifying and reducing the time involved for government transactions. The third pillar of our approach is citizen participation and government innovation. We have improved through the 2014-19 Digital Agenda the alignment of all government agencies, including AIG. The Digital Agenda—PANAMA 4.0—is the planning tool that allows us to identify IT investments and horizontal needs for multiple agencies for AIG to focus on developing shared platforms and assisting in effective procurement. We will be embarking, starting in 2016, on a more disciplined approach to digital agendas as an instrument for modernizing government, and we are going to do this on a high level. We are looking for top-notch global consultancy companies to help us in this regard.

How advanced is Panama in the implementation of e-government compared to other countries in the region?

Panama ranks amongst the leading countries, which also includes Uruguay, Chile, Mexico, and Colombia. Panama also participates in the ministerial meetings held every two years by the Latin American and Caribbean Network for e-Government (Red GEALC), where best practices are shared and proposals are considered for regional alignment. Chile will host the fourth such ministerial meeting in 2016, and Panama will host it in 2018. We expect that Panama will have more things to show and more advances for 2018, as we move forward in the execution of our 2019 goals.

How can AIG improve efficiency and transparency in the public sector?

Besides the Digital Agenda as a planning and alignment tool, we have been training government IT personnel belonging to the different ministries and agencies to make better use of technology for decision-making, communicating with citizens, and using open data platforms for citizen information and also for public sector information, which contributes toward a more transparent government. We also manage the citizen contact center, the 311, which we upgraded in 2015 with mechanisms to measure citizen satisfaction with the service provided by the agencies. More and more people are using the 311 and they see that it is effective for solving their concerns. We have closed more than 92% of cases within the legal time frame, and support the agencies in improving their internal service processes with timely feedback and CRM tools. As an example, the Ministry of Environment is using the 311 service, which also utilizes geo-referenced capabilities, in order to integrate citizen alerts for environmental violations or environmental impact studies. This platform is similar to what we have developed for the geo-location of schools with the Ministry of Education and soon to release with the Transit Authority. There are similarities between what we are doing with these agencies and local governments in support of their citizens and private-sector interactions, with a comprehensive roadmap to become smart cities.

We will offer new e-government online transactions in 2016, having approximately 100 that are nearly ready to be rolled out through the agencies. We will also make available a platform for open government, new mobile apps, a new generation of the government cloud, and new functionalities for the voice and data telecommunications network for the government, and continue to advance in the national Digital Agenda for modernizing the government. We plan to consolidate the discipline we are achieving with this government in the way we procure technology fostering healthy competition. We are making sure that all of our tender processes remain as transparent and as open as possible for government suppliers as we acquire the most appropriate technology that is required by the individual agencies. We are looking forward to Panama being one of the leading countries in e-government, as this is a key factor for remaining in one of the top places in the region in terms of competitiveness and attracting FDI.