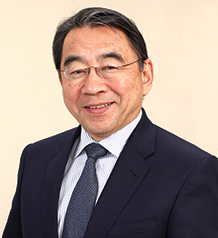 Tsuyoshi Nakai passed the Superior National Administration Examination by the Japanese government and joined the Ministry of International Trade and Industry (MITI) in 1976. He directed policy making in various fields, such as industry, trade, energy, small enterprises, and high technology. He was appointed Chief Representative for China, the New Energy and Industrial Technology Organization (NEDO) Beijing office (1995-1998), and Director General of Japan External Trade Organization (JETRO) Paris for European and Maghreb affairs (2003-2008). He was Corporate Vice-President of Fuji Heavy Industries (SUBARU) for overseas marketing, external relations, and legal affairs (2011-2014). He is presently CEO of Japan Cooperation Center Petroleum (JCCP), a position he has held since July 2014. He graduated from Keio University in Economics in 1976 and studied at the Fletcher School of Law and Diplomacy in Boston (MA) in 1982. He was also a Visiting Professor for Management of INSEAD (France). His written works include China under the Energy Risk Era. In 2013, he was awarded the French L’ Ordre National du Merite.

Share on:
TBY talks to Tsuyoshi Nakai, CEO of Japan Cooperation Center, Petroleum (JCCP), on the recent decline in oil prices and areas where technology cooperation are taking place.

How has the recent decline in oil prices impacted your relations with oil and gas companies in the Middle East?

The relationship between the Middle East and Japan should be based on mutual benefit over the long term. The short-term matters are not our first concern. That is the principle of the JCCP. Of course, the price of oil is sometimes high and sometimes low. The impact of that can either be good or bad for any particular economy. Focusing on the medium to long term, in addition to developing new oil and gas industries, we support technological and human resource development as well. Those are the base of our mutual relations with the Middle East.

What are some of the key areas of technology cooperation taking place?

One area is high severity fluid catalytic cracking (HSFCC)—an original technology of Japan which process can be obtained highly value added products such as light olefin, thereby stimulate energy conservation. We have multiple technologies in Japan that are solutions to issues facing oil companies in the Gulf, and we welcome cooperation and dialogue to try and promote collaboration. In Abu Dhabi, under ADNOC, there is a national oil refining company called TAKREER, which operates a technical research center called TAKREER Research Centre (TRC). TRC was originally created by IDEMITSU and JCCP along with TAKREER, and it has developed well. It researches refining technologies and evaluates and improves performance of refineries. Abu Dhabi is now developing major new refineries, which need the technological support that TRC provides. I am in discussion with the CEO of ADNOC, Abdulla Nasser Al Suwaidi, to develop further collaboration in technology and human resource development. We engage in similar collaboration with Nizar Al Adsani, CEO of Kuwait Petroleum Corporation (KPC).

How are you working to promote collaboration between JCCP in the long term through engagement with national oil companies in the Gulf?

Of course, we are one of the highest petroleum consuming countries. In addition, Japan has a particularly unique working style not found in Europe or the US. As a developed country, Japan can supply an interesting, pleasant way of doing business, which derives from our long history and rich culture. The Middle East has its own histories and cultures, and we are offering a new way of cultural engagement as the third choice. It is important that Japan tries to import aspects of Western culture and integrate them into Japanese society. In the automobile sectors; for example, we have our own business and working style, though originally automobile technology comes from Europe and the US. Japanese industries are becoming very competitive today. They know how to make a product efficiently, safely, and in an environmentally friendly way. Especially in the field of manufacturing, Japan is developing a reputation for high-quality products. Additionally, we have experienced many environmental problems during our economic growth period that we overcame, and we had a major earthquake, namely North-East Japan Earthquake several years ago. We faced the difficulties and recognize that safety and environmental issues are important. Historically, our culture and values show that Japanese people are very involved in addressing the challenges of promoting higher levels of safety and a better environment. This kind of expertise can help countries in the Middle East.