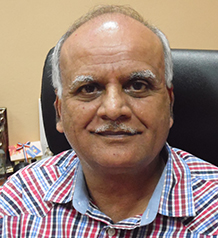 Dr. Jagannatha Rao was born in 1956 in India. He is currently the Director of the Institute for Scientific Research and Technology Services (INDICASAT-AIP), Distinguished Scientist of Building 219 at the City of Knowledge, adjunct faculty of Biomedical Informatics, at UTHS in Houston, and Advisory Board Member of minority scholarship at UTEP. His research specializes in mechanisms of protein conformations in neurodegenerative disorders, DNA dynamics in the neurodegenerative brain, and Neuro-nutraceuticals. He is on the editorial board of 25 journals, and he has guided 20 PhD candidates.

Share on:
What is INDICASAT’s mission? INDICASAT-AIP was started in 2002 by SENACYT as an institution involved in technological advancement services. The aim at the time was to provide analysis and technical […]

INDICASAT-AIP was started in 2002 by SENACYT as an institution involved in technological advancement services. The aim at the time was to provide analysis and technical services. Initially, we started by supporting the Panama Canal and carrying out analyses for canal operation purposes. In 2008, when Dr. Julio Escobar was in the National Security branch of the government, two changes were brought about. The first was to make the institution autonomous, as previously it was part of the government. He put Association of Public Interest (AIP) in the name, and this led to tremendous institutional progress because it allowed us to receive tax-exempt donations for research purposes. Also in 2008, Dr. Escobar decided that this institute should evolve from being a service center to becoming a leading research institution, and current National Secretary Dr. Jorge Motta is further supporting this idea, thus making the institute highly competitive and innovation driven with productivity. The institute focuses on biomedicine and inter-disciplinary sciences. Biomedicine does not only refer to medicine and doctors, as we also work with psychologists, sociologists, computer engineers, and other disciplines through all of the available faculties. Right now, there are 28 academics working at the institute, including chemists, medical doctors, biologists, engineers, social scientists, and physicists.

What is being done to promote patentable technologies?

The institution is a model institute, so we started a program whereby we were publishing papers and collaborating on innovative technologies. Now that Panama is more aware of patentability, people are focusing on it. We wanted to go one step further and build a technology park. We have a received a land donation from some Panamanian groups and plan to build what will be called the Knowledge-Based Technology Park. We plan to collaborate with companies and involve Panamanian scientists in the creation of novel technologies and play a key role in the transfer of technology from elsewhere. The important thing is that we not only want to pursue scientific development, but also promote developing technology within the country. Even simple antibiotics are not currently produced in Panama; they are instead only repacked here. We would like to develop a technology park so that we can bring together local and foreign investors. We will use the benefits from that for developing science, technology, and education Panama.

We have set three important targets for 2016. The first is to create a greater role for local institutions and universities in INDICASAT, and to this end we have started a joint program with UTP, which is the first PhD program in the country. This is a successful program with increasingly more institutes becoming involved. The program will be taught in English, which is something new and will help empower local universities. We are also helping the University of Panama develop a batch of English-speaking medical doctors, while finalizing MD-PhD program implementation. Our dream is to help universities around the country become stronger in the areas of STEM teaching. As an institute of highly qualified individuals, we want to transfer that knowledge to develop and support local colleges and universities. The other dream is the Technology Park, for which we would like to finalize the plans by the end of 2016. Our goal is to transform INDICASAT-AIP from a model institute into a leading institute and thus make it a National Institute of Excellency with international recognition. This would position Panama as an international science hub within the next 10 years. We are looking for wise decisions by Panama’s policymakers to invest in science and technology in the coming years. We predict that by 2050 the GDP of Panama is going to increase by threefold, and we will need local Panamanian manpower to handle such economic growth. Hence it is necessary for policymakers to take a long-term approach toward investment decisions.