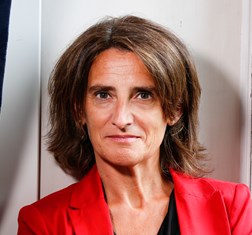 Teresa Ribera is Minister for Ecological Transition of Spain. She holds a degree in Law from the Complutense University of Madrid, a degree in Constitutional Law and Political Science from the Center for Political and Constitutional Studies of Madrid, and she belongs to the Superior Civil Administrators of the State. She was one of the first five technicians to be part of the Spanish Office of Climate Change (OECC), created a year later. She led the office as a director, between 2004 and 2008, and as Secretary of State for Climate Change until 2011. At the Climate Summit of 2015 (COP21), France recruited her and placed her at the heart of the negotiations as the director of the Institute for Sustainable Development and International Relations (IDDRI). She has been a member of the World Commission on Geopolitics of Energy Transformation of the International Agency for Renewable Energy (IRENA); part of the advisory board at the Stockholm Environment Institute; of the French Institute for Development Research (IRD), of the international commission for the revision of the German sustainable development strategy; and of the advisory council for climate of the World Economic Forum between 2014 and 2016.

Share on:
“It is fundamental that the traditional actors feel that evolution is easy although they are being pressed to evolve.“

What were the initial challenges that the ministry had to face?

The greatest challenge was to recover lost time. The world, Europe, and Spain are immersed in the process of an important transformation of the economic model that involves incorporating environmental and climatic variables to overcome the modernization of the economy. This transformation had been postponed, and we were nearing the deadline for an important part of the European regulations plan regarding stability, visibility, and anticipation. We were also late on issues of the structure of costs, monitoring of emissions, making decisions regarding thermal plants, and incentives for the transformation of the energy model. Our challenge was to catch up and generate confidence in investors and society regarding our capacity for transformation. This required a clear explanation of our vision in the medium term but also the activation of some specific reforms that would make socially bearable some decisions that should have been made a long time ago. Unfortunately, the term was over. We had to recover the strategic vision and the lost time in a short period of time.

What have been the most outstanding achievements of the last months?

We have achieved important goals. We held an honest and transparent public debate about the need to transform our economy and the way it has to be done. We underlined that it is impossible to make that transformation without the social component. We followed up with the toughest measures such as stabilizing or mitigating the evolution of the price of electricity and making it bearable for households and industrial consumers. We addressed our commitment to ending the use of coal, which had a deadline of December 2018 for mining and 2020 for the majority of thermal plants. We addressed the safety of nuclear energy material and the forecast of nuclear energy in the medium term. The forecast and evolution of the protection of the oceans were extremely important for the integration of the environmental variable, as well as an analysis on how to update the hydraulic policy. We have not had the time to elaborate an in-depth reflection on the politics of water. Water, soil, climate, and energy are fundamental for any economic activity, but these are limited resources. Spain has a highly complicated position regarding water, and in a climate-change scenario, uncertainties and threats are greater. We must manage water efficiently by eliminating beliefs such as surplus or historical rights. We must approach this issue with a different perspective of governance in addition to incorporating the values and recommendations of the European Union framework. Spain is paying fines for judgments of the Court of Justice of the European Union for lack of compliance with obligations regarding sanitation and purification. Our level of development makes this data scandalous, but we can improve our water tradition. We have an infrastructure that must think beyond the transport of water to consider the efficiency and the interconnection of the desalination facilities in case of shortage. We have begun to work on these aspects, but the process has been put on hold although it has important issues for the next legislature.

What are the objectives of the Draft Bill on Climate Change proposed by the ministry?

We wanted to offer a transversal and broad strategic framework, and establish a vision that would integrate three parts. The draft bill defines the institutional framework for making decisions and the tools that help guarantee flexible certainty. That is, it helps us to understand how we establish objectives as well as the tools that allow us to evaluate the fulfillment of those objectives within a modulated process. We must understand how to facilitate and improve the learning of operators. This means an early integration of the G20 claims on financing and financial risks for climate issues as well as the recommendations of the European Commission working group that draws on the solutions developed in France. Investment decisions and spending will be more consistent because it will be increasingly understood what climate change is. The learning instruments and the indicators on resilience and adaptation are integrated about the impact of climate change. The signals of change in the whole energy system are extremely important. There are initial positions regarding factors that will be relevant in the coming years, such as storage, demand, and the evolution of the gas sector that should evolve into biogas and hydrogen. After these first changes in the energy system, we will end up with a fair regulation of the transition measures. First, the law will be established (institutional framework), followed by the perspective toward 2030; that is, what is the best way to maximize opportunities and minimize costs to meet the objectives that lead to decarbonization of the economy by 2050 and a significant advance by 2030. These plans are made on a robust economic analysis contrasted with external actors, academic actors, the European mobilization patterns, and the ability to analyze national, economic, and energy variables. In the third place, we have a fair transition package. This is new as it concerns the approaches of energy and climate policies in other countries. From the first moment, we honestly assume the need to accompany the regions and peoples whose centers of activity are committed to a fast transformation in a short time. We must also accompany the sectors that are called to it.

How can the energy transition plans solve the dependence of Spain on imports of fossil fuels?

Spain is one of the countries with greater energy dependence from abroad due to the volume of imports of fossil fuels. However, we have a great potential to replace these fossil fuels with autochthonous renewable resources. We have the value chain and the accompanying capacity to do it if the pieces are well articulated. If this is achieved, an important volume of resources will be released that can be used for innovation, industrial policy, or social redistribution, accompanying the groups that need training or incentives to have economic reactivation in transition areas. This win-win situation has a transversal appeal among all the stakeholders.

Regarding shared self-consumption, last year there was a decree that approved this possibility with the added advantage of having less bureaucracy. What is next now?

We need a decree that develops the technical aspects to be fully operational. In the first decree, we eliminated the first obstacles, including the self-consumption tax; however, it was necessary to arm the connectivity of the facilities, the eventual compensations for the consumption, and the evacuation of the surplus. We have reached an interesting balance, but we must differentiate between small domestic self-consumption installations against self-consumption facilities of relevant volume that are for industrial activities and can generate more dispersion in the network. There is no adequate management capacity, so a specific regulation is needed. This solution will have a positive impact on prices. We are already experiencing the effects of the first changes. The associated non-positive effect is that more water could be pumped because the energy consumption costs are lower. Water is extremely scarce, and although it costs less to pump it, we should not consume more. The parameters are changing, and one of the challenges we will face will be storage.

We have made the first draft of a larger project, but we must manage its opening. There are margins of notable improvement in aspects of great interest for economic actors and investors such as the circular economy and the use of resources. The reform of the market and the reform of the fiscal system are pending. The industrial accompaniment remains, as well as the accompaniment of infrastructure for mobility and the anticipation of the new great challenges like storage, distribution networks, transport, and digitalization. We must materialize the bets in efficiency. The position of the ministry is evolving. A transformation of these characteristics requires a firm position concerning the direction to be taken as well as enabling and generating synergies. It is fundamental that the traditional actors feel that evolution is easy although they are being pressed to evolve.