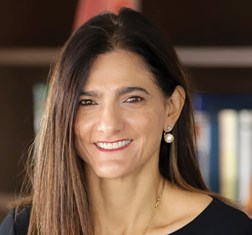 í€ngela Marí­a Orozco holds a degree in law and socioeconomic sciences from Universidad Javeriana in Bogotá, and a master’s in comparative jurisprudence from the University of Texas. Before becoming the Minister of Transportation, she was the President of the Colombian Association of Edible Fats and Oils Producers. She is also a founding partner of the firm Research and Opportunities. Her former positions include Minister of Foreign Trade, President of Proexport, and Vice President of the Colombian Association of Flower Exporters. Previously, she was also a lecturer of International Trade at the Universidad Javeriana and the Senior Management Program of the Universidad de los Andes.

Share on:
The government and ministry's efforts to boost the underdeveloped tertiary road network must be fully supported in word and deed.

What is the importance of a solid network of tertiary roads for Colombia, and how is the government addressing the issue?
Colombia is not only a geographically complex country but also an extremely diverse one. It has a long extension which increases the need to build a solid network of tertiary roads in order to reduce costs for the agricultural and tourism sectors and to integrate the rural communities with the urban ones. Although private investors have invested in tertiary roads, since 2015 the national government has not followed suit. Considering all this, President Duque and the Colombian congress approved a USD150-million program for tertiary roads in the national budget for 2019. We are expecting the government to invest at least USD1 billion in building the tertiary road network over the next four years. In that light, at present, we are debating to enlarge this budget for 2020, 2021, and 2022. Colombia has around 140,000km of tertiary roads, of which 90% are in need of maintenance or improvement. In our program, Invias (National Roads Institute) will supervise the whole development of the roads. We have developed a program with a prioritization criterion that has to do mainly with production sectors. The plan is to give maintenance and improvement to the roads that connect rural to urban areas, giving priority to agricultural products and prioritizing ecotourism routes under the new economic development plan. This program also includes the possibility of adding capital from different sources. This includes the national budget, royalties from the OCAD mechanism, and taxes paid by companies in the agricultural and mining sectors, where they can put money in public works in exchange for taxes. We are also looking for resources from international cooperation and other sources as it is important to have a solid system of road maintenance and construction.

How is the government planning to restart and complete the 4G projects?
The government has already delivered. When the new government came into power, out of 30 projects six were working as planned, three had some issues, and 21 were halted. Notwithstanding the contracts signed between 2014 and 2016, only minimal work had been done on most of them. This was for many reasons—administrative, environmental, and a lack of government coordination. Designing, structuring, and financing a project is one thing, but constructing it is something else. The National Infrastructure Agency (ANI) was a new entity that was strong on the financial side but weak on the territorial and execution side. We established an economic activation room to sit with the attorney general’s office and primary actors to diagnose problems and propose alternative solutions. Once this public document was released, we started executing decisions and solutions. We had set the target to enforce 70% of the projects by March 2019 and achieved this with 21 projects underway by the end of that month. Civil construction decreased during the first three quarters of 2018, respectively, and by the last quarter of 2018 we increased it by 5.5%; during 1Q2019 the sector increased by 6.5%, which is more than the economy as a whole. During this period, we had two new financial closes and by December 2019, we will deliver at least five more; notably, some projects are working even without the financial closure since people are putting money in with a bridge loan or equity. We took decisions, negotiated transaction agreements, signed modifications to contracts, and developed a strategy with the Colombian environmental agency to give alternatives to several projects, such as “La Ruta del Cacao,” which did not have financial closure due to uncertainties about an environmental license. The original proposal was rejected but we provided time, space, and an alternative location for the road, which gave the bankers the certainty they needed to close the deal.