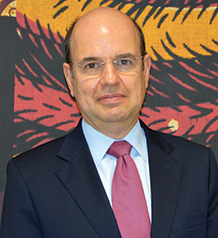 Rui Oliverira graduated with a degree in Civil Engineering from the Instituto Superior Técnico. He worked in Lisbon for Teixeira Duarte from 1987 to 1996, later joining Ocidental Seguros where he worked for four years. In 2000 he was appointed Operations and Claims Manager at Império Comércio e Indústria. Currently he is Board Director at Seguradora Internacional de Moçambique and President of the Insurance Association.

What is the background of the Insurance Association in Mozambique?

The Insurance Association was established in 2003. At the time, there were only five companies associated in the market, and few issues to discuss. Yet over the past three or four years, we have grown to 16 companies, around 10 of which are now members of the Association. We try to present a unified voice for the industry, and yet to date membership is not compulsory although we are working to see that becomes the case in 2015.

What are Association’s principle industry concerns?

First of all, we would ideally like to see a representative of each company in the market. Secondly, the government is making important revisions to the national insurance legislation. The Association’s main area of concern is the final shape of this legislation. From an international point of view, ours has only been a free market for the past 20 years, with legislation left dormant. Insurance legislation has seen two incarnations since 2000, and areas such as worker compensation and the market have regrettably taken separate paths. The Insurance Association has played a vital role in advising the government in aligning the legislation with the reality of the market. One of the issues in Mozambique is that the government does not create funds for compulsory insurance for areas such as worker’s compensation or motor insurance. Legislation does stipulate certain types of mandatory insurance coverage, which is taken out from private sector companies, and we are not an endless supply of capital able to guarantee limitless liability. This is precisely where the Insurance Association comes into its own in terms of aligning the expectations of the law with the needs of the private sector. It is also a problem of fiscalization, as there is no reliable data on, say, the percentage of vehicles insured, despite this branch being mandatory.

What are the Association’s concerns regarding the major energy projects in the north?

A document has been drafted by the supervisory institution in its capacity as consultant to the government, according to the findings of which the government is negotiating with major investors. Generally speaking, the major oil and gas investors want to retain the right to insurance coverage that circumvents the Mozambican system. The government has approached the Ministry of Finance as well as the Insurance Association. In our opinion, it is not only a question of the impact on our industry, but also about protecting our national interests—this is a matter of assets set to be built in this country, but insured elsewhere. It is a contentious issue, and the government needs to arrive at a legal solution. New gas regulations feature a two-point article on insurance where point A almost aligns with our outlook, while point B is a complete contradiction of that position. By accommodating both views neither becomes clearly stated.

How do you expect insurance penetration to evolve in the coming years?

Market penetration is at around 2%. We know that we may not yet be strong enough to retain the big risks of the big projects taking place in the country, but we have to start. With time, we can increase our potential. Meanwhile, although Mozambique’s GDP is expected to grow by around 6-8%, the bulk of that derives from the major projects being rolled out. Naturally, if we are not involved, our average growth will be negatively impacted.

What steps are necessary to raise national awareness of insurance?

It is quite difficult to make people understand the necessity of insurance, and despite many years of work on this, our society lacks a culture of insurance. People forget that insurance is a key element of a growing economy, especially if assets, investments, and capitalare growing, and with them, the inherent risk of loss. Internationally, insurance companies work with reinsurers of sufficient financial weight to be able to mitigate risk. Pemba, for example, is a vital area for Mozambique, where projects seek out the coverage of strong companies.