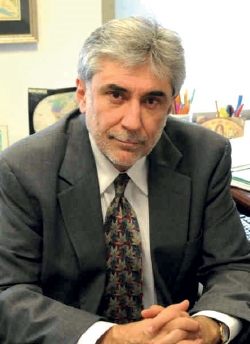 Rafael de la Cruz holds a PhD in Economics from Paris University with highest honors. He currently holds the positions of Representative of the Inter-American Development Bank (IDB) to Colombia and Chairman of the IDB’s Sanctions Committee. His has held a range of positions including Coordinator of the Sub-National Government and Decentralization Cluster at the IDB, and leading economist both at the IDB and the World Bank; Director of the Public Policy Center at the Institute for Advanced Studies in Administration, Head of the PhD program on Development Economics at the Center for Development Studies in Venezuela; and Director General of the Presidential Commission for the Reform of the State in Venezuela (COPRE), where he led the process of decentralization in that country. He is also author of books, papers and dissemination articles on development economics, public policy, political economy, and decentralization and theory of the State.

Share on:
What have been your basic strategic goals for Colombia? The bank has four areas of intervention in the country, the first being institutional. What we have is countries that are […]

What have been your basic strategic goals for Colombia?

The bank has four areas of intervention in the country, the first being institutional. What we have is countries that are advancing in economic and social terms, but governments and private sector institutions that are not upgrading in tandem. On the governmental side, one key problem in the case of Colombia is the inability to manage investments well. We are working extensively with the national government and the National Investment Agency (NIA), which oversees the $25 billion infrastructure program. In general terms, the government is behind what we would like to see as actual investment management. This is particularly important for sub-national governments that have responsibility for 30% of public expenditure and over 50% for investment. We have worked on a credit line of $600 million for sub-national governments to be invested in two sectors, the first being fiscal and managerial capabilities.

Unemployment in Colombia has decreased to 9.3%. What are your expectations for 2014?

I think that Colombia is one of the three or four countries in Latin America that could make the jump within the next 20 years to becoming a developed country. In order to do so, we need to focus on competitiveness. Colombia is now at the crossroads; it could be considered a middle-income country. This title means that the country has grown roughly by 4% every year from $5,000 per capita to $10,000 in 20 years. However, the economy is not sufficiently diversified, and infrastructure is not yet adequate, while institutions and the business class are not fully modern. There are those who are aware that competition is a key to growth, and those who fear it and seek subsidies. If we were all to work toward being competitive, I believe that unemployment would fall even further and that Colombia would attain the status of high-income country.

The Inter-American Development Bank (IDB) has signed a loan with the Colombian government for $40 million to address climate change. What is the significance of this project?

Up to 25% of our work portfolio must be dedicated to climate change according to an agreement we have with country members. I think that there is caution over climate change. Nobody can deny that whatever we can do to reduce our carbon footprint is good for the economy and for humankind. We are working on a new energy model by trying to shift from carbon-based to renewable energies. On the other hand, public income comprises just 14%-16% of GDP in Colombia, compared to over 20% in similar countries in the Americas, such as Brazil at 34%, or the US at 36%. In a country with 14%-16% of public income, you have to think hard about what you are doing in terms of new technologies that might not be ready to be sustained in financial terms. We are currently financing a $40-million renovation of the bus fleet of Bogotá in a shift from diesel to hybrids. We think hard about the consequences of the shift because the good part of the story is that we are going to have less carbon emissions. The bad part of the story is the cost involved. The problem is that if the cost of this technology is such that you cannot pay for it with the tariffs that the local government is willing to impose on the public, the operation of these buses has to be subsidized by the voters. With public income at 14%-16% of GDP, I have to wonder which hospital, school, or street is not going to be maintained correctly, or not going to be built. We do not want to push in the direction of new technologies if these are incompatible with the fiscal side of the equation. We are being responsible by both pushing forward with a new energy model, while maintaining fiscal responsibility.