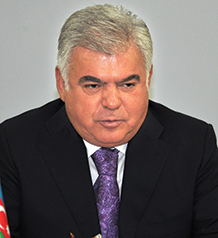 HE Ziya Mammadov has been the Minister of Transport since 2002. Prior to that, he was the Chief of the Azerbaijan State Railway Department from 1996. He graduated from Rostov Railway Transport Engineering Institute, completed his military service in 1974, and has held various managerial roles. He is an Honored Railway worker, and an honorary citizen of the city of Derbent, Russia. Mammadov is also a full member of the International Academy of Transport.

Share on:
TBY talks to HE Ziya Mammadov, Minister of Transport, on modernizing the sector, major projects, and how to stimulate development.

With the European Games approaching in 2015, tourist numbers will increase significantly. What necessary steps have been taken to ensure that Azerbaijan’s transport sector is prepared for the Games?

Extensive activities carried out under the leadership of President of the Republic of Azerbaijan HE Ilham Aliyev have laid the groundwork for future achievements and progress in our country. As a result of the President’s attention to the transport sector, Azerbaijan’s transport system is modernizing. Economically, the sector is improving yearly, and we have seen enhancements in quality and efficiency. Sustainable development and economic growth in recent years have attracted international attention to our republic. It is beyond doubt that the decision to award the inaugural European Games to Azerbaijan is vivid evidence of strengthening international confidence as well. The key responsibilities of the Transport Ministry in relation to the First European Games will include the repair of infrastructure on all roads to be used in the Games, optimization of Baku’s transport network, including the purchasing of additional taxis, establishment of a centralized public transport management system, as well as the continuation of our work to address issues of technical supply.

How has Azerbaijan’s transport industry evolved in terms of technological advances?

The industry has established an intelligent transport management system that is available in only a handful of other countries. We have introduced a cash-free method of payment to public transport. In addition, we have renewed our bus fleet, imported taxis meeting modern standards, updated the railcar and locomotive depot, and a new railcar plant is under construction. Modern aircraft have also been purchased.

What have been some of the major projects of 2014, and how would you evaluate their success?

In 2014, work continued on road infrastructure projects reconstructing east to west, the replacement of energy and communication systems, and the establishment of the central management system. A total of 43.8km of roads have been rebuilt during this period, bringing the overall result to 361km thus far. In addition, 49 station buildings have been over-hauled, nine electric and diesel locomotives and 12,000 wagons have undergone various repairs, and we purchased new locomotive and railcars. In addition to the oil and gas pipelines, which represent tremendous importance for the region and Europe as a whole, construction of the Baku-Tbilisi-Kars railway has progressed at a rapid pace. The new railway will pass through the South Caucasus, link the east with the west and become a new trading artery for Eurasia. The construction of a new 29km section on the Akhalkalaki-Turkish border section part of the Baku-Tbilisi-Kars railway has been completed and is being prepared for commissioning. A test train has been run, and the project is scheduled for commissioning in 2015. In addition, a 2.3km section of the 4.4km tunnel is being built on the Turkish-Georgian border. Gigantic regional projects, such as the new seaport and the Baku-Tbilisi-Kars railway, have been implemented on the initiative and with the direct support of the head of state. These projects will significantly contribute to the development of Azerbaijan’s transport sector, expand the country’s transit potential, enhance transportation safety and bolster Azerbaijan’s transport links with Eurasia.

How has the logistics sector improved, and what can be further done to stimulate its development?

In order to address the gradually increasing problem of traffic congestion in Baku, we have established the Intelligent Transport Management Center. The Center uses cutting-edge technologies to ensure effective regulation of city traffic and eliminate congestion on the roads. One of the main functions of the center is to manage the operation of buses. It applies a system of electronic navigation to monitor traffic and generate real-time information to identify the demand for transportation (at rush and non-rush hours). The Center has been instrumental in optimizing passenger transportation, and is helping to improve the environmental situation in Baku.

How successfully has the Ministry of Transport collaborated with foreign transport organizations in 2014?

A number of measures have been taken to accelerate the integration of Azerbaijan’s transport system into the international transport network while also expanding the international collaboration of transport agencies. Sustainable technical andorganizational activities have been carried out to further improve the efficiency of the transport system. This has been possible thanks to the great creative work done by the National Leader HE Heydar Aliyev. Azerbaijan’s authority and reputation is steadily growing. The public and political stability, as well as the economic reforms under way, are having a positive impact on our relations with foreign countries. By building its foreign policies on principles of equality and mutual interests, the Republic of Azerbaijan has asserted itself in the international community as an open and reliable partner. In order to expand our cooperation in the Eurasian region, we have continued collaboration with the UN European and AsiaCommissions, the European Commission, GUAM, CIS, OSCE, the Black Sea Economic Cooperation, the International Transportation Forum, the International Road Transport Union (IRU), the International Civil Aviation Organization (ICAO), the International Maritime Organization (IMO), the Organization for Cooperation between Railways (OSJD).

Which areas are the most important for the development of Azerbaijan’s transport sector in 2015?

We will continue our work on infrastructure building in 2015. The reconstruction of the Khojasan-Lokbatan highway was carried out, as well as new construction of roads and bridges and several repairs to existing highways. The ferry terminal of the new Baku International Sea Trade Port was commissioned in September 2014, and work related to commissioning the first phase of the port is now in full swing. We will work on large regional projects such as the new seaport and the Baku-Tbilisi-Kars railway. These projects will significantly contribute to the development of Azerbaijan’s transport sector, expand the country’s transit potential, enhance transportation safety, and bolster Azerbaijan’s transport links with Eurasia. The transport sector is one of the most rapidly developing sectors of the Azerbaijani economy. Far-sighted policies and the support and determination of our National Leader HE Heydar Aliyev and incumbent President HE Ilham Aliyev have contributed to the transport sector’s evolution as one of the most rapidly developing sectors of the Azerbaijani economy. We transport workers are grateful for these successes to the far-sighted policies, incredible talent and wisdom of our National Leader HE Heydar Aliyev and to the determination, intransigent will and broad outlook of the incumbent President HE Ilham Aliyev. We want to assure our government that we will continue doing everything in our power to fulfill the instructions and recommendations of the President. It is the responsibility of all transport workers to ensure timely and quality service, and help bring Azerbaijan’s road transport infrastructure into line with international standards. Additionally, the Ministry is also working to contribute to the solution of social problems, improve the country’s unified transport policy, conduct reforms, and expand cooperation with international organizations.