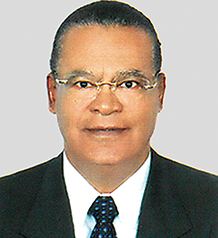 The Crest of the Curve

Dr. Salem Abdu Khalil Mohamed Al Zyni has been a technical advisor for the government of Fujairah since 1979. With a bachelor’s from Egypt and an MSc and PhD from Reading University in the UK, he is a member of the development committee of the Fujairah Oil Industry Zone and the Port of Fujairah, and a board member of Fujairah Refinery Limited, the Fujairah Oil Terminal, and the Al Fujairah National Insurance Company, among others.

Share on:
TBY talks to Dr. Salem Abdu Khalil Mohamed Al Zyni, Technical Advisor for the government of Fujairah at Fujairah Oil Terminals, on getting vessels to switch from offshore to onshore, the cyclical nature of the industry, and staying one step ahead of clients' needs.

Can you give us a short history of Fujairah Oil Terminals?

Due to its proximity to oil-producing states and markets via the Arabian Sea and Indian Ocean, Fujairah has become a strategic location and natural hub for the industry. During the Iran-Iraq war in the 1980s, a lot of vessels were anchored in front of Fujairah as they waited to get into the Gulf. However, the insurance premium was cheaper in front of Fujairah than going further into the Gulf, so we had a queue of ships. We decided to raise an anchorage fee on vessels and let them enter the 12-mile remit. Since then, Fujairah has developed into a bunker hub because of the number of waiting vessels and the one-stop shop that we developed. Over time, by giving incentives and complying with the regulations of shifting the ships from single to double hulls, we have managed to attract a lot of companies from storing offshore to onshore in Fujairah.

What drove your success as an internationally recognized oil hub?

Besides the location and calm sea, we were able to grow with flexible regulations and transparency, which we provide to all companies with no monopoly being granted to any company. There is a limited waterfront in Fujairah, which is why we have opted for a technical solution whereby instead of each terminal having its own waterfront we have a center where all the terminals use the port of Fujairah through a manifold matrix, and for each terminal connected to this manifold, they have access to almost nine pairs and a VLC, which can then be split into 17 pairs. This has helped the companies to save on investment.

What is the significance of Fujairah Oil Terminals’ contribution to the economy, and how does the oil industry create job opportunities?

Although there have been several attempts to diversify the UAE economy, oil remains a major part of the economy of the UAE and Gulf states in general. It will continue this way for a long time, so for us to be a logistics center and serve the oil industry is desirable and strengthens the whole economy of the UAE and Fujairah. Our emergence as a hub highlighted the importance of Fujairah’s strategic location, whilst also becoming a center from which to export 70% of Abu Dhabi’s crude oil.

What is the current capacity of the oil storage facilities, and what are the development plans for the next 5 years?

The current capacity is approximately 10 million cbm, which is forecast to rise to 12 million cbm by the end of 2019 and, at a later date, 15 million cbm.

How has the cost of oil storage evolved over the years?

The move from floating storage to onshore storage was more cost effective, which is why we have the current number of terminals. The cost per cbm is budgeted depending on the price of oil, which is cyclical. The price is not fixed, but all terminals in Fujairah are operating healthily, sometimes at 100% utilization. Despite the cyclical nature, most of the terminals are operating above 80%.

We intend to continue growing in partnership with the companies we work with. We listen to them and aim to be ahead of the curve in meeting their needs. We will not stop investing in the future and are aware of the competition around us, not to mention the competition facing the industry. We take all of this into consideration and continue to grow and improve the business and do more for added-value industries.