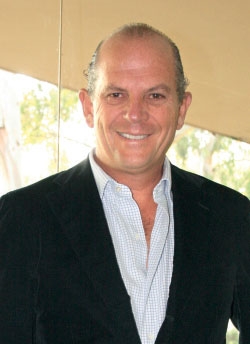 Javier Sordo Madaleno graduated in Architecture from Universidad Iberoamericana and joined Grupo Sordo Madaleno, which was founded by his father, in 1982. An exponent of contemporary architecture in Mexico, over his broad architectural career he has completed hotels, malls, office buildings, health buildings, churches, cinematography rooms, factories, and numerous residential buildings in Mexico and abroad.

Share on:
What has influenced you the most in your career? My father has been my main source of inspiration in my career; another architect who has been instrumental is Luis Barragán. […]

What has influenced you the most in your career?

My father has been my main source of inspiration in my career; another architect who has been instrumental is Luis Barragán. He has influenced me from the beginning in terms of simplicity. Today, my two sons are also a source of inspiration. They are in architecture now and are already working with me. It is always the younger generation that brings in new ideas, and so you are always learning. It is important to have them here also because they are the only ones that tell you the truth.

How has the family business evolved in recent years?

Overall, 2013 was one of the best years in the history of the company. Since 1937, there hasn’t been a year where we have designed more projects than in 2013, while 2014 also looks outstanding. We have lined up some of the most interesting projects we’ve ever taken on. We are working extensively in Monterrey, Guadalajara, Playa del Carmen, Cozumel, and in other cities around the country. We feel that our situation has been exceptional. Although the economy is still not booming, everybody has high expectations for what is coming next.

Could you tell us more about the performance of these projects in the real estate area?

We just opened the Antea Lifestyle Center in Queretaro. Antea is the largest shopping center in Latin America, and marks one of our best designs. It has around 78,000 sqm of retail space. To date, we have opened around 60% of the shopping center. What is fantastic news for us is that we currently have around 10,000 cars pulling in every day on average—and it is not yet fully open. This means we are turning every parking space that we have in the shopping center 2.5 times, with only 60% of the retail space opened. We estimate that we will receive around 12 million people a year when fully open. We are also opening a fantastic shopping center in Veracruz, on the coast with a beach front near the convention center in the city. Also, in Mexico City, we have started the construction of the Picacho Lifestyle Center, which is a project similar to Antara Polanco, but in the south of the city. We expect this project to revolutionize retail in Mexico; we have the most important brands and it has around 120,000 sqm of leasable area. There will also be four office towers at around 20,000 sqm each. We are truly proud of the design. At this point in time, we are finishing El Toreo, which is a shopping center located on the border of Mexico City and the state of Mexico. It is fantastic to work with some clients as designers, and we are proud to include some new concepts in this scheme. We have designed a park on top of the center of about 6,000 sqm. This will change the way people view greenery in shopping centers. It has a large-scale roof, which is set to be one of the biggest in Mexico.

Are you thinking about going international?

We are definitely looking to develop an idea in Spain. We are also looking at the US. The problem we have now is that we have so many projects here in Mexico that we haven’t had time to look elsewhere. That being said, of course, we are always eager and we would like to advance and expand internationally.