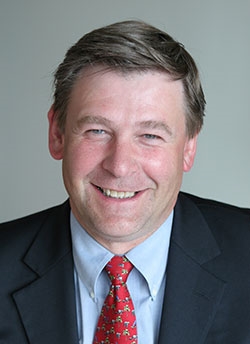 Ron Hochstein is currently President and CEO of Lundin Gold Inc., (“Lundin Gold“), a position he has held since December 2014. He is also Executive Chairman of Denison Mines Corp. (“Denison“) since March 2015. Earlier, he had served as President and CEO from 2009 to 2015. Previously he had held senior executive roles with Denison and its predecessors since joining a predecessor company in 1999. Prior to joining Denison, he was a Project Manager with Simons Mining Group and worked at Noranda Minerals as a metallurgical engineer. He is a Professional Engineer and holds an MBA from the University of British Columbia and a B.Sc. from the University of Alberta.

Share on:
"We feel rather confident, but as I have told our investors, this is not a smooth journey."

Lundin Gold recently purchased the Fruta del Norte project from Kinross for $240 million in cash and stock. Why did Kinross pull out from this project and why is Lundin Gold ready to take on the challenge?

Kinross made the decision in 2013 to discontinue the development of the project after two years of negotiations with the government of Ecuador and following the failure to reach agreement on fiscal and developmental terms. Over the next 18 months it tried to reach a resolution. In May of 2014, we began to evaluate the opportunity and moved quickly to close the transaction in December 2014. I have been involved with the Lundin Family for 20 years, and it is a great opportunity for me. The Lundin family has invested $100 million of its personal money into the project and will continue to invest as needed. In 2014 the Ecuadorian government began to become more focused on developing mining as a facet of its economy. The fall in oil prices has created even more of a focus on mining and how this economy needs to diversify.

Ecuador has not always been too open to mining investment. How confident do you feel about the improvement in the Ecuadorian mining fiscal and regulatory environment?

We feel rather confident, but as I have told our investors, this is not a smooth journey. There will be times when we advise investors to fasten their seat belts. However, our approach is slightly different, as most of our management team is in-country and we are committed to Ecuador, working with its government and people of Ecuador, in realizing the project at hand. We have Latin American advisors, primarily from Chile, who are convinced that this is the optimum time for the project.

“We feel rather confident, but as I have told our investors, this is not a smooth journey.”

Fruta del Norte is unquestionably one of the world’s best as-yet undeveloped gold deposits. What are your expectations from this project and what profit do you foresee?

Profit is contingent upon the gold price. Many people ask me what my expectations are for the gold price, and my answer in short is that it does not concern me. This is one of the best-undeveloped gold reserves in the world and also among the highest-grade sites. We will be profitable at gold prices that might put many other companies out of business, and the government will still be generating returns. We have 18 months since the date that we signed to submit what is called a phase change application to go to exploitation. Therefore, we have multiple engineering efforts currently underway, and other than certain unique specialty areas being done in Canada, all other efforts are being expended in Latin America. Our goal, once we have the feasibility study done and phase changes, is to move straight into construction, and hopefully by 1Q2019 we expect to pour the first gold bar.

Does Lundin Gold intend to develop any other projects in the country?

We find ourselves in solid position, in that we can hopefully set the standards for responsible mining in Ecuador. We see this not only as an opportunity for Lundin Gold, but also for some of our sister companies such NGEx Resources Inc., a company with exploration projects in Argentina and Chile. It is more focused on base metals, such as copper, and so we see opportunities not only for Lundin Gold, but also for other entities within the group. This is Lundin Gold’s first project, and a fantastic one to build the company on. Lundin Gold will be the family’s new gold vehicle, and so we will be seeking other opportunities once we get Fruta del Norte up and running.

What is the objective of Lundin Gold for 2015?

Actually 2016 is a key year for us, because by June 2016 we are obliged to have submitted our exploitation phase transition documentation, whereby 2015 will require tremendous efforts. We have technological activities on site and will involve significant engineering; working with the government on moving forward with agreements, and starting to work with various financial institutions to ensure that related financing is in place when the time comes to construct the facility. In short, perhaps we might say that 2015 will be a year of major progress, rather than milestones.