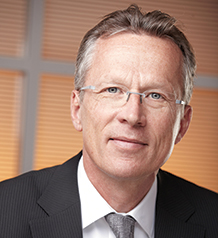 Patrick Van Daele was born in 1960 in Belgium in a family of teachers. In 1982, he graduated from the University of Leuven, Belgium, with a degree in Geology. Patrick started his career in 1983 as an exploration geologist in Shell’s exploration venture in Bangladesh. During his career, he held a range of technical and executive positions in Shell’s upstream ventures in Tanzania, the Sultanate of Oman, Nigeria, Syria and Ukraine. In 2011, he was appointed as Country Chairman for Shell in Saudi Arabia and Bahrain looking after Shell’s upstream and downstream interests.

What major investments do you have in the pipeline?

Shell is seen as a responsible corporation in the Kingdom of Saudi Arabia, and the social activities we deploy in the country are well regarded and valued. We first try to understand a society’s needs, and then we make sure our social investment programs address those needs. At the moment, we run four programs—a highly-acclaimed entrepreneurship training program and a road safety program, to name a few. When it comes to commercial activities, we are happy to have been in the Kingdom for 75 years and are looking forward to another 75 years or more. We have a keen interest in growing our presence in the country, both on the upstream side in exploration and production of gas, and on the downstream side, where we are involved in refining and chemicals. We have a joint venture with SABIC in petrochemicals, and there are discussions of future investments that we could contemplate together both in Saudi and abroad. What may not be widely known is that our partnerships with Saudi Arabia extend beyond the borders of the Kingdom. The largest “Saudi” Joint Venture is in fact in the US, a partnership with Saudi ARAMCO in Motiva that includes three refineries, including the largest US refinery at Port Arthur. This shows that the respect we have earned through our activities in the Kingdom has allowed us to successfully partner outside the country. With SABIC too, we are currently in discussion on projects we could be undertake outside the Kingdom.

What plans does Shell have to be more involved in the Kingdom’s gas exploration?

In mid-2014, we decided to end further investment in our joint venture with Saudi Aramco, which started in 2003. In that decade, we invested a considerable amount of money to explore for gas in the Empty Quarter. You will appreciate that this being an extremely remote area, and the fact that the gas resources in that area are particularly difficult to produce, and requires many wells, are factors that have contributed to this decision. However, it is good to see we were able to go our separate ways with mutual respect. If in the future fresh opportunities arise in the Kingdom, we want to be at the front of the line for those opportunities with ARAMCO. It is up to the Saudi Government to decide on the development of its resources as they did a decade ago, in an initiative whereby certain areas in the Empty Quarter, and only those areas, were offered to international investors. It led to the creation of four joint ventures, of which Shell partnered with ARAMCO. If the Kingdom sees value in continued investment by international companies in gas exploration, the government would have to take actions similar to the one they took a decade ago. Saudi Arabia realizes that more gas is required for the existing and growing petrochemicals industry, not just in the eastern, but also the western part of the country. There is still a lot of power generated by diesel and crude oil. The Kingdom has an intention to do away with that and to use gas for power generation, which is much more economical and environmentally friendly.