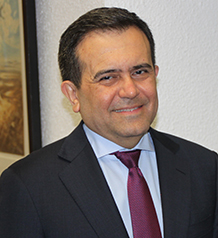 Ildefonso Guajardo Villarreal obtained his BA in Economics at the Autonomous University of Nuevo Leon, and later did graduate studies in economics at Arizona State University (ASU) and the University of Pennsylvania (EBD). He has served as Chief Economist of the Brazil Section, and Associate Economist in the Fiscal Affairs Department at the International Monetary Fund, and Director of the North American Free Trade Agreement Affairs Office. He has also held different positions in the Federal Government, including serving as Federal Congressman for the Second District of Nuevo Leon. He has been a full time professor at the Autonomous University of Nuevo León; and assistant professor at the Arizona State University and the Wharton Business School at the University of Pennsylvania.

Share on:
TBY talks to Ildefonso Guajardo, Secretary of the Economy, on the implications of recent reforms, Mexico's relation to the global economy, and two decades of NAFTA.

What do you think needs to be done before the end of Pena Nieto’s six-year term for the economy to grow by more than 3%?

The reforms initiated by Peña Nieto have led to long-term structural improvements in the Mexican economy, and having solidified the national economic foundations of the country, they have enabled better growth figures than would otherwise have been expected. For years, the task at hand was to initiate financial and regulatory reforms to open up the economy so that it fosters greater efficiency, dynamism, and competitiveness, and that is exactly what we have achieved since 2012. When you consider the challenges and difficulties the world economy has faced in the last few years, and how it has affected other Latin American countries, Mexico has emerged relatively well.

How have the reforms transformed Mexico over the past few years?

The reforms continue to have an impact, which is becoming more ingrained as time passes. Today, we can already see some of the direct benefits of those reforms. One example is in electricity costs for companies in the manufacturing sector, which have been reduced by 18 – 26%, depending on the type of enterprise and segment. One can imagine how important these savings are for companies that have heavy energy needs, be they cement, petrochemicals, or the iron and steel businesses. This has also had a significant effect on consumer savings, thanks to a decline in long distance rates and greater competition in the telecommunication sector following our reforms. There has been a big increase in FDI in the last two years as a result of these telecom reforms, with players such as AT&T and Huawei investing up to $1 billion and $1.5 billion in Mexico respectively. We have seen similar levels of foreign investment in the oil and gas sector.

What potential does the Asia-Pacific region have for Mexico, and how important is the Pacific Alliance for Mexico?

Traditionally, Mexico has always looked first and foremost to North America. We continue to try to and deepen our relations within North America, where have created an integrated economic zone among the three nations (Canada, the United States and Mexico) where value chains have become stronger than ever, for example, Mexican manufacturing exports incorporate a 37% of US value added. Looking South, the aim is to further integrate and improve economic and trade relations within Latin America. The Pacific Alliance countries represent about half of all commerce in Latin America, receive around 40% of all FDI in the region, and if considered as a single unit it would represent the seventh largest economy in the world. Looking further West, we are participating in the Trans-Pacific Partnership (TPP), which has gained renewed relevance as of late and has enabled Mexico to shift more attention and emphasis to the Asian and Pacific region. Looking at NAFTA, we believe there is a need to modernize and update NAFTA, which is already more than 20 years old, especially in relation to various sectors, like trade in electronic goods. With Europe, we were one of the first Latin American countries to sign a free trade agreement with the EU, and thus we need to modernize and update the terms of that agreement so as to improve trade flows between Europe and Mexico.

What measures is the Ministry of the Economy taking to support the growth and development of SMEs in Mexico?

One of the president’s campaign commitments was to create the National Institute for Entrepreneurs. The institute offered a fund for young entrepreneurs to help them get their businesses off the ground and promote growth. Around $1 billion has been put aside for this task, helping promote and support entrepreneurs and SMEs throughout Mexico. About 40% of funds have gone to SMEs, with the rest going to truly innovative enterprises and entrepreneurs who need support to grow their business into a viable SME. The institute works with the private sector to help integrate SMEs into the value chain, to help them export their products, and to help provide training, consulting and other services so that they can succeed as businesses and also help create a nationwide network where ideas and strategies can be discussed and interchanged.

In which sectors have you seen the most FDI?

Before NAFTA was signed in 1994, average annual FDI in Mexico was somewhere in the region of half a billion dollars annually. After NAFTA was signed that figure was at around $1 billion a year until 2012. Under the administration of Pena Nieto, that figure now stands at $33 billion. The dynamics of foreign direct investment has been transformed with reforms in Mexico. The most direct effects are in the telecommunications and energy sector. Examples of it are Huawei´s and AT&T communications announcements, the Round One and the estimation of everything that will come in the oil sector. Mexico has a great advantage, the access to the North American market, which is privileged. It allows us to move into production schemes in the field of foods and beverages that not only satisfy the national market but also the international market.

With the huge increase in foreign investment in Mexico, what has the government done to share new opportunities evenly with all states in the federation?

Naturally the investments have been directly tied to which parts of Mexico have the best capacity to attract those investments, which states have the best infrastructure, human capital, resources, access to roads, ports, logistical networks, offer a good standard of living for foreign expats looking to relocate there, provide security, good schools and health facilities. So obviously, a lot of those investments are going to Northern, Central, and Western Mexico. But, ultimately, we aim to transform the South of the country and make it a bigger economic player. In line with this objective, the President has outlined a plan to establish “Strategic Economic Zones” in Southern states, and also major infrastructural projects to develop ports, roads, and logistical networks so as to better connect and integrate southern Mexico into the national economy and also the regional economy. The aim is to do away with this image of one Mexico with two economies, one super connected, efficient, advanced, industrialized, and the other remaining a stark contrast to that.

What other objectives would you like to see done before the end of this Presidential term?

One of our big challenges has been to balance sustainability with our objectives for steady, long-term growth and job creation. For this, we have had to ensure that we can constantly add value into the public and economic value chain. About 33% of the Mexican economy is completely integrated into the global economy, producing top quality products through highly advanced, efficient, and competitive businesses; another portion of the economy is comprised of the traditional economy, with low productivity, difficulty in creating new jobs, and the inefficient use of resources and capital. This means providing incentives to actors and businesses in the first group to deepen and widen their participation in the national economy, while the other businesses are backed by associations and funds like the National Institute for Entrepreneurs.