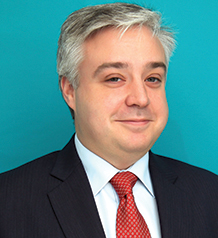 Francisco Parrilla started his professional career as Design Engineer for Arup in London in 1997, moving to Russia in 1998 to develop his experience on project and site management in the international realm. In 1999, he moved to Arup’s Spanish office, where he worked for three years in Spain and South America in different positions and was a key part of the team that grew the office six-fold to 65 employees. In 2002, Francisco joined Turner & Townsend, where he was instrumental in developing the company’s international business around a selected number of clients. During this period, he regularly lived and visited Africa and Asia to develop projects and the company interests. He joined European Future Group in 2007 as Real Estate Development Director for Romania, where he structured and developed several residential, commercial, retail, and industrial projects. Francisco joined Chagala Group as Director of Capital Projects in 2009 and was appointed CEO in January 2011. He graduated from Universidad Pontificia de Comillas ICAI, Madrid, Spain in 1997 with a degree in industrial engineering and from London Business School, London, UK in 2005 with an MBA.

Share on:
With many companies tightening their budgets, what is changing for your business? Chagala was a first mover in terms customer base diversification in 2014 and 2015. One of our major […]

With many companies tightening their budgets, what is changing for your business?

Chagala was a first mover in terms customer base diversification in 2014 and 2015. One of our major customers is the Kashagan oil field, which has embarked in the budget tightening exercise since the end of 2014 until today. Based on its move, we anticipated a change in the landscape and we tighten our budgets following our customers earlier. Given that we provide in general the best value for money solution in the markets that we operate in, with the new round of cost savings, we have not seen a major impact yet. There is an ongoing adjustment due to the exchange rate fluctuation of the tenge because our operating currency is the tenge and our reporting currency is US dollars. If anything we will see an increase in business because of our best value for money principle and customers abandoning expensive options in favor of cost continuous, fit-for-purpose ones. Our core clients—people who stay at our properties—are generally those who work in the office, not in the field. Given our long-term relationship with our customers that want the customized kind of service we provide, we have not had to put emergency plans in place. However, we work closely with our customers and we believe there is a general consensus that if crude oil price drops below $20 for a sustained period of time, we will have to resort to swift effective measures internally to allow our customers to stay with us on a sustainable basis.

Chagala is focused on the needs of international and domestic oil companies. After this unstable year, is your client portfolio the same? What strategy are you following to retain them?

Chagala has always focused its efforts on serving the international oil and gas industry. In Kazakhstan, this means western Kazakhstan, which is why our assets are so concentrated in the Atyrau, Mangistau, and West Kazakhstan regions. Our facilities in Aktau, Bautino, and Atyrau are focused on offshore projects such as Kashagan and onshore projects such as Tengizchevroil. Our properties in Uralsk and Aksai are heavily weighted toward the Karachaganak project. So this accentuates the fact that oil and gas is a target for us. This is the key industry in these locations and the group delivers quality accommodation solutions on a value-for-money and fit-for-purpose basis to its clients. We are opportunistic investors inside and outside Kazakhstan, and we are currently actively looking in places like Egypt and Turkey.

What are your goals for the year ahead?

I believe people underestimate the difficulty of staying in business in an environment that faces increasing costs and stagnant or diminishing sales. Competition is tough in all our operating markets, so surviving with dignity is no small feat. If we can do that, our next challenge will be to expand outside of Kazakhstan. We have dedicated resources into looking at this since the beginning of 2016 and we have already made some inroads with clients for whom we will be operating hotels or residences. We aim to focus more on serviced apartments rather than on hotels, but we value all opportunities under the same light. 2016 is also the year when the bonds issued on the KASE by one of our subsidiaries in Kazakhstan come due and we are in the process of refinancing them. Due to currency exchange movements, refinancing has become easier for us as it now represents a smaller part of our balance sheet liabilities. Nevertheless, like with any refinancing, we take this process seriously as the Group remains committed to repaying its debts. Lastly, the successful completion of our latest development in the West Kazakhstan region in 2016 will mark the start of a new operating model in that region for us—an important development as the process has taken 20 years.