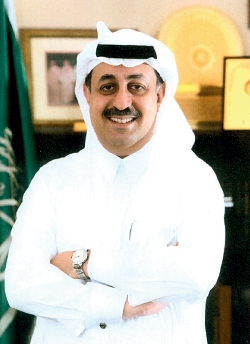 Bandar bin Saud bin Khalid bin Mohammad Al-Saud was born in 1962 and has a degree in Social Sciences from King Saud University. He later went on to obtain a diploma in Public Relations in Los Angeles. He is currently the Secretary General of King Faisal Foundation, having occupied a number of roles at the organization for many years. He also has a number of private commercial interests, and acts as the Chairman of several companies.

Share on:
Can you talk about the moral convictions that have led the King Faisal Foundation to conduct itself as it does today? To begin with, I think that we take our […]

Can you talk about the moral convictions that have led the King Faisal Foundation to conduct itself as it does today?

To begin with, I think that we take our mandate from the life of the late King Faisal. His goals and achievements inspire us, both as a leader to Saudi Arabia, to the Islamic world, and worldwide. Therefore, we take the goals and aspirations of the foundation from his lifelong achievements. After King Abdulaziz and King Saud, he constitutionalized the model of Saudi Arabia. He put it on the world map as one of the main players in the international arena. He did that with policy and proper leadership, and he achieved a lot in his own country in education and health, as well as in other vital sectors of modern life. He elevated Saudi society from one that was basic, to a certain extent, to one that is sophisticated and modern, following the trends of the world. He established government institutions and many of the laws that we see today. His legacy was in education. This is where the foundation has taken all of its goals. He thought that to have a productive and successful society and country you had to have educated people, and ones who could participate intellectually in their own country’s growth, to the world’s benefit. I remember when he was asked how you would immunize Saudis from different ideologies—like communism, for example—he said, “education.” He said that the only thing we could do was to educate and let them decide by themselves what was right and wrong. That is why the foundation has concentrated on education and cultural research.

The King Faisal International Prize is a famous scientific and cultural prize. How do you see the prize through the lens of the region’s rise onto the global stage, especially economically?

The prize is one of the leading international prizes; probably number two after the Nobel Prize. If you go to the scientific societies, whether universities or research centers, you will find that the King Faisal International Prize is well recognized and respected. As many as 17 of our winners have gone on to win the Nobel Prize after they won the King Faisal Prize for the same subject. It is fair and independent, which is what has made it so famous. It definitely adds to the winners’ reputation because it is recognized not only by the foundation, but also by the universities and centers of excellence around the world that nominate the prize, and the judges and committees that chose the winner. The King Faisal International Prize, for us, is one of the jewels of the foundation that we are extremely proud of.

How are King Faisal Foundation’s investments managed to provide maximum resources and flexibility for its philanthropic efforts?

The investment policy of the foundation is a long-term strategy. The foundation is going to be here for a long time, as there are no shareholders demanding immediate profits, and our investments fuel our philanthropic efforts. We look at stability over the long term, and we protect the capital investment itself. That gives the foundation the solid status that it has today. We always add to society through investment. It is not pure investment because we look at other factors, such as how are we adding to the city, and to the economy. Sometimes we do a philanthropic project like what we did in southern Saudi Arabia. We bought a large piece of land, and on part of it we built a village for the homeless. We brought them in, educated them—there were schools and hospitals, for example—and we gave them houses to live in. We trained the adults and gave them jobs. These people were nomads following the rain with their sheep and we settled them and educated them, because we wanted to educate their children, and we could not do that if they were moving. We gave them benefits. By doing this, the rest of the land appreciated in price. We invested the money in a clever way, meaning that when we sold it we actually made money from the whole project. Therefore, we achieved diverse philanthropic, economic, and investment goals in one project.