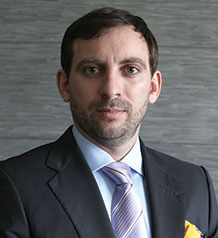 Luca Piccolo holds an MBA from Universidad San Pablo CEU in Madrid, Spain (2004). He has worked from 1998 until 2007 on various businesses, including Dbrains Web Studio and Grupo Integer. Since 2007 he has been working at Venit Investments, first as a COO and since 2009 as CEO.

Share on:
"We have mainly Mexican families and businesses as our primary investors."

How has the history of Venit Investments shaped your approach to real estate development?

Venit Investments was founded in the 1990s and is a family-owned company. It began as a medium to invest in real estate. We started as an investor and our entire business model is based on the premise that we are first and foremost investors. We care for the investment and the capital that we invest, so it is important as it guides the entire process of project selection. In Mexico, some developers make their money by developing another company’s project and then collecting the fees and costs that they incur. For us, however, we value the final profitability of the project after it is developed, even though we have our own fees and our own integral costs of developing. It is essential to cover basic costs and make profitability the highest priority, as it is going to translate on profitability on our business. We began developing hotels as a way to invest capital in more long-term commitments, and then developed other projects. We then started growing. We made the decision to focus primarily on the mixed-used niche products in mid-sized cities, as there is a greater opportunity for growth because more people are moving to these cities. Most mid-sized cities are like Monterrey in the 1990s, and we understand the process well, how they grow, and how opportunities are created. Therefore, we take what we have learned throughout the years and apply that knowledge to those cities. We always work with local partners because we also need the expertise of the people that live there.

Who are the main investors in your developments?

We have mainly Mexican families and businesses as our primary investors. We have established trust with people that know us, and they respect our reputation. We have a few international investors, and we are now in talks for a long-term investment with a European family office, which is an interesting project for Venit Investments. We have been working with American investors as well, but that started just last year. We also try to invest our own money in most of the projects we develop. This reassures investors that we have a personal stake in the outcome.

How have demographic changes in Mexico driven your business model?

Urbanization started a long time ago in Mexico. Around 80% of the people here live in cities with a population greater than 15,000 people. At the end of the last century, everything was concentrated on three or four cities; Monterrey, Mexico City, Guadalajara, and, in a lesser way, Puebla. What has changed is an increase in foreign investment, which created job opportunities and potential growth in other medium-sized cities. That is creating opportunities for people to experience the big cities but on a smaller scale. Querétaro is an interesting example, as it is a medium-sized city that has several of the most important business hubs and commercial centers. There is also now increased mobility in Mexico. Until a few decades ago, the country was traditional in that people were born, lived, and died in one place. People are more mobile today.

How would you characterize Mexico’s progress in terms of “green” or environmentally friendly construction?

We do not have a government agency that is enforcing anything beyond the basic requirements in Mexico. You have a few places that are trying to enforce green initiatives, but there is no enforcement like in Europe, such as the Carbon Fund. The second issue is the lack of demand. Building a certified LEED building is very expensive, and to build a green building you need an investor who is willing to pay the extra cost—in Mexico there are few businessmen who are willing to invest at this level. Consequently, there are people interested in building those type of products, but they do not have the target market. One thing that we have been doing as a business it to try to find a work around: we do not certify our buildings, but that does not mean that we cannot apply some of the same technology and regulations. We based our construction models on a few of the LEED and European green certifications, and we analyzed what can be applied to the project, and if the market is going to willingly absolve and pay. We should be doing more of this, and the majority of developers fail to take this into account. We have realized from the last several projects that we can do a lot without having to spend more.

What are your goals for the next several years?

We are starting two large projects in Bajio, so our top priority is to see them through to completion. One of them is a 10-year project, which is a good amount of time. We will start the first of seven buildings on that project, hopefully in 2016. My priority is to consolidate those projects, as they are our largest yet and are important for us. We are also starting a very interesting condo project in three cities. One in the north, one in the south, and the last one in the center of Mexico.