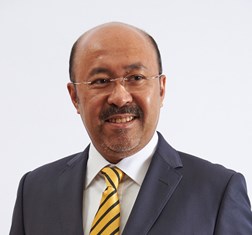 Dato’ Mohamed Rafique Merican assumed his current role on July 1, 2016. He was previously the Group CFO of Maybank Group. Dato’ Mohamed Rafique has more than 26 years of experience in the corporate sector, including five years as CEO of Tenaga Nasional Berhad and Malakoff Berhad. Prior to joining TNB in 2009, he served as CEO at Radicare (M) Sdn Bhd. He is currently the Chairman of the Board of Directors of the Islamic Banking and Finance Institute of Malaysia (IBFIM). He is also a fellow of the Association of Chartered Certified Accountants (ACCA), UK, a chartered accountant with the Malaysian Institute of Accountants, and an alumnus of the Advanced Management Programme at Harvard Business School.

Share on:
How has Islamic banking developed within the Maybank Group? In 1983, the Islamic Banking Act enabled the establishment of Malaysia’s first Islamic bank. Maybank was founded in 1960 and started […]

How has Islamic banking developed within the Maybank Group?

In 1983, the Islamic Banking Act enabled the establishment of Malaysia’s first Islamic bank. Maybank was founded in 1960 and started an Islamic window in 1993, offering Islamic products through the same channels as conventional products. In 2008, the vision of offering an alternative to conventional banking in Malaysia led to the establishment of Maybank Islamic. Over the last 10 years, we have grown from a fairly small operation to become a significant part of the group. In 2018, we contributed 59% to Maybank’s financing in Malaysia. Maybank Islamic oversees around 30% of the group’s assets and was responsible for 28% of the bank’s profit before tax (PBT) in 2018. Islamic banking has significant room for growth in ASEAN countries such as Indonesia and Singapore. Since 2010, the Maybank Group has adopted an Islamic-first approach, where we offer customers sharia-compliant products and services as a standard product. If the product is fair and the pricing is competitive, it cuts across different faiths; half of our customer base is composed of non-Muslims. Our mission is to become a global leader in Islamic finance.

How do you assess international awareness, understanding, and acceptance of Islamic finance?

Understanding of Islamic finance has increased. The key thing is to explain the underlying principles behind some of the terminology and distill some of those transaction structures. We have additional filters such as how the proceeds from that financing facility will be used. We exclude a range of sectors, such as gaming, tobacco, and arms. Notably, in the sukuk space, close to 30 countries have issued sovereign sukuks, including the UK and China.

Having pioneered its development, how can Malaysia continue to be at the forefront of innovation in the Islamic finance industry?

Malaysia is the largest player in our region and the only non-GCC country in the top eight in terms of global banking assets. This gives us the opportunity to engage with stakeholders from different regions. There is a strong need for Islamic banking products to be more broadly accepted. The time has come for us to link the different countries and regions and synchronize their Islamic finance structures to move toward internationally recognized and accepted norms.

How do you assess the impact of fintech on the banking industry in Malaysia?

Fintech is an interesting development, though it is important to recognize that when one starts to deal with funds from clients, strict regulation will come into play. The fintech landscape has not reached the same regulatory robustness as the banking sector. The lion’s share of the customer base still lies with banks, so it is logical for fintech companies to look for ways to work together with banks. At the same time, banks will increasingly look at models to embrace fintech.

The momentum for Islamic banking to be on par with conventional banking is still there. It is important to ensure there is interaction and engagement with the halal economy, so that after taking an Islamic facility, other parts of the ecosystem are equally strong. Wealth management within the Islamic finance context also requires development, so these are the two main thrusts for Maybank Islamic. In addition, we are looking at the regional context. There is still a great deal to be done, and in the medium term we need to see a regulatory environment that would allow Islamic finance to be introduced at a much larger scale. The next logical step would be to link to the world’s other Islamic finance center, the GCC, which we will do through our Dubai office.