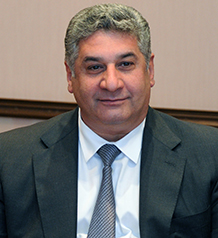 Born in Baku in 1964, Minister Azad Rahimov studied at the Azerbaijan Languages University, and began his career as Head of Department of the Khatai district Committee of Youth Union (Komsomol) of Azerbaijan after completing his military service in 1987. Two years later, he was named head of the entire organization, and in 1990 became Head of the Youth Organizations Committee of Azerbaijan, a position he occupied until 1993. From 1994 until 2006, Minister Rahimov worked in the private sector, firstly spending four years as General Director of the Ros-Imesko, followed by eight years as General Director of the Italdizayn Company. He served as President of the Azerbaijan Dance Sport Federation between 2005 and 2006, and was named as Minister of Youth and Sports of the Republic of Azerbaijan in February of that year. In 2006, the Minister was also named as Vice-President of the National Olympic Committee of Azerbaijan. Since December 2012, he has served as CEO of the Baku 2015 Operations Committee.

Share on:
TBY talks to Azad Rahimov, Minister of Youth and Sports, on how hosting international sporting events has and will continue to boost the profile of Azerbaijan and its athletes.

With the 2015 European Games hosted in Baku, what is your assessment of the development of the sporting activity and Olympic athletes of Azerbaijan?

Azerbaijan is a country that has always had sports at the center of the government’s care and vision. When President Ilham Aliyev was selected as the President of the National Olympic Committee in 1997, our country greatly increased the attention given to sporting activities. The number of young people participating in sports increases every day. As an example, at the Atlanta Olympic Games in 1996 (23 athletes), Azerbaijan won only one silver medal. In Sydney in 2000 (31 athletes), Azerbaijan raised its medal count to three (2 gold, 1 bronze). A few years later at the Athens Olympic Games (37 athletes) our team won 5 medals (1 gold and 4 bronze). Success at these Olympic Games carried over to other Olympic Games as well. So, at the Beijing Olympics (44 athletes), Azerbaijan won 7 medals (1 gold, 2 silver, and 4 bronze), and in London the number of athletes was 53 and the number medals won was 10 (2 gold, 2 silver, and 6 bronze), which was a record in the history of Azerbaijani sports. Also, I would like to present the difference in the number of medals won by Azeri athletes over the last 10 years; in 2005, the number of medals won by Azeri athletes was 213 (Olympic 122, non-Olympic 91), and in 2015 this number reached 823 (297 Olympic, 526 non-Olympic). At the first European Games, 50 European countries participated in this event. Azerbaijan placed second after Russia in terms of the number of medals won with 21 gold, 15 silver, and 20 bronze. Seeing the evolution of Azerbaijani athletes over time, it was not a surprise for us to place second among 50 competing countries in the First European Games with 56 medals.

The Formula One Grand Prix will be the biggest event to take place in Azerbaijan in the summer of 2016. Attracting viewers and fans from all over the world at an unprecedented level for Baku, how are you preparing for this event?

All preparation efforts for the event are currently proceeding on time. The track preparation is fully on schedule, and we are incredibly excited to see F1 cars racing through the streets of Baku this summer. It will be a great opportunity to show the world the beautiful, welcoming, modern, and exciting city of Baku. We have already reached one of our first major milestones when we launched ticket sales for the event on December 19, 2015, and the international and domestic interest levels have been positive. From the moment this project was confirmed, we have been learning as much as we can to help us deliver the best possible race weekend. The BCC team has already visited several Grand Prix races to study how different hosts deliver this major event. A key lesson we took from this was learning how to align all the stakeholders—hotels, retailers, and transportation services—in Baku and Azerbaijan in the promotion of the race weekend to help maximize the huge potential for the city and nation that comes from hosting such a major event. We are determined to deliver a race weekend that is uniquely ours, and one that showcases Baku and Azerbaijan to the world as a modern, exciting, and beautiful place. We want the Baku race weekend to be unlike any other on the calendar and to become a highlight of the annual F1 season. Moreover, we are currently planning an incredible entertainment program for all visitors to ensure that when they are not enjoying all the racing action, they will be suitably entertained throughout the weekend. We plan to offer various fan engagement activities throughout the circuit and live concert performances by major acts every evening. Like most races in new markets, we accept that F1 is not fully established in the country. However, after carrying out independent research over the summer, we found that awareness levels of F1 in Azerbaijan were high. The challenge for us now is to convert this awareness and general level of curiosity into genuine excitement and passion for the sport. Ideally, we want to create a new generation of F1 fans here in Azerbaijan, and hopefully one day we may even see an Azerbaijani driver.

The World Chess Olympiad is also coming to Baku in 2016. What are your expectations for this event?

Azerbaijan has achieved many accomplishments in chess and has a strong chess tradition. By the initiative of our former President, Heydar Aliyev, more than 70 chess schools were built across the country. President Ilham Aliyev has continued this policy. We have chess schools and centers in every region. Many children and young people show great interest in this game and it is very important for Azerbaijan to hold chess events like this one. This event offers serious input into the development of chess in the country, with spectators getting to watch the world’s strongest players perform. Azerbaijan was the winner of the European Chess Championship two times, in 2009 and 2013. In 2015, Baku hosted the Chess World Cup, which attracted 128 well-known chess players from various countries. I was happy to see how Shakhriyar Mamedyarov played in this tournament. During one of the days, more than 600 spectators came to see the match, showing the high level of interest in chess. I believe that the Chess Olympiad in 2016 will be held at the highest level. Almost 2,000 chess players from 175 countries will do their best to win first place. Baku will have 3,000 guests for this event, putting Azerbaijan at the center of the world.

How has hosting sports events, like the F1 race, become a useful tool to increase the visibility of Azerbaijan?

The importance of the F1 race to Baku and Azerbaijan cannot be underestimated. After successfully hosting the European Games in 2015, this is the next major global event to be staged in our capital. This will help establish Baku as a home of major international sporting events, which is something that can only be a good thing for the city’s international reputation and tourism prospects. There are many advantages to be gained from hosting a major sporting event and in particular a Formula One Grand Prix. There are few other sports that can bring the same amount of exposure that Formula One does. Beyond simply getting spectators through the turnstiles, there are many potential benefits that arise from hosting such a major sporting event. The economic benefits are clear: increased tourism, increased spending in the wider hospitality industry, and increased investments from international companies. It is in this latter benefit that Formula One really stands out as a hugely positive addition to any country/city’s economic strategy. Formula One creates an open environment for B2B and business-to-government (B2G) networking with key decision makers. The challenge for Baku is to maximize the ways in which we can build upon the spike in economic and tourist activity during the upcoming race weekend to extend into the rest of the year and beyond. We want people to come to Baku for the race and stay for the culture, excitement, fun, and beauty this city has to offer.