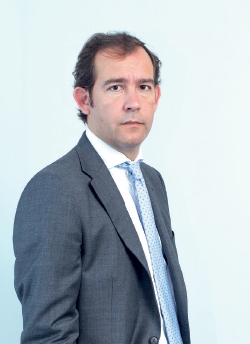 Luis Marí­a Ruiz del Portal Lázaro studied engineering and information technology at the University of Seville, and subsequently completed his post-graduate studies at the same institution. He began working in Sadiel in the year 2000, working on various projects related to budgeting and accountancy for the Junta de Andalucí­a and the promotion of Andalusian products. He went on to develop consultancy and management projects for the revenue and tax system of the province. In 2011, Sadiel was acquired by AYESA, and in 2013 he moved to Colombia to assist in the development of the public sector.

In 2013, OECD Secretary-General Angel Gurrí­a formally launched Colombia’s accession process with Colombian President Juan Manuel Santos, and Colombia has surpassed Mexico in FDI receipts, ranking only behind Brazil and Chile. In this context, what is the outlook for the Colombian economy?

Our perception is that Colombia will see a continued increase in FDI over the coming years if it continues to focus on two of the pillars that attract it, namely improved infrastructure and a modernized public administration. It is also crucial for growth to maintain government transparency, while taking measures to ensure public security. Meanwhile the OECD’s invitation confirms that Colombia is advancing in the right direction. Foreign investment has helped change the world’s perception of the country, which is the first step toward generating confidence among international markets. Furthermore, Colombia is playing a key role in the Pacific Alliance, an interesting and dynamic Latin American integration process, which was officially launched as a trading group in June 2012 at a presidential summit in Chile. It currently brings together Chile, Colombia, Mexico, and Peru, and is set to include Costa Rica, Panama, and Guatemala in due course. AYESA has headquarters and strategic projects in all Pacific Alliance member states. At AYESA, we perceive this opportunity as a testing ground for key projects that can be replicated throughout all current member nations of the alliance and in those that may join in the future.

From its subsidiary in Bogotá, AYESA provides coverage in areas such as civil engineering, water and environmental engineering, oil and gas engineering, and telecommunications consulting. How has AYESA been consolidating its leading position in engineering consultancy?

Public entities are being modernized and the government is supporting this modernization, providing the necessary legislation. Compared to other local and foreign companies, AYESA provides tools that already incorporate much of the requirements of this new legislation, and is well-versed in the necessary steps an organization must take to adapt, and perhaps more importantly, those to be avoided. This experience is embodied in the strategic projects that we are developing in Latin America and in the references of satisfied clients. We have found that this combination is highly appreciated by our customers in Latin America, and look forward to contributing our know-how to this modernization process.

The Bogotá Capital District government awarded AYESA a contract for the auditing of advanced basic engineering studies of the city’s first subway line. What does AYESA’s advice entail?

AYESA audited the technical design for Line 1 of Bogotá’s underground metropolitan railway, which consists of overseeing, coordinating, and ultimately controlling the project for the contracting entity. Having accumulated invaluable experience in design, construction, and the auditing of subway lines in cities as diverse as Seville, Barcelona, Malaga, New Delhi, Warsaw, and Mexico City, we are supremely positioned to implement such schemes. We were also selected by the government of Panama to oversee the design, construction, and commissioning of Line 1 of Panama City’s metro system. This project allows us to present a more dynamic profile of AYESA, where we combine the services offered by our civil engineering wing with those of our technology wing; this is probably our definitive differentiator among our competitors. Few companies can offer a turnkey product if they lack strength in these two areas. This added value is what has made project implementation possible within such a short space of time.

What are AYESA’s prospects for growth in Latin America and your priority markets?

AYESA has been present in Latin America for over a decade, with operations in Mexico, Panama, Colombia, Peru, Ecuador, Chile, and Brazil, and we are conducting market research in at least three other countries. The company’s unequivocal focus on Latin America is on achieving sustainable growth.