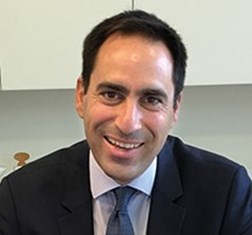 Founder of Hawa Akkar, Albert Khoury has extensive experience managing one of Lebanon’s private distribution utilities. He is now at the forefront of the clean and renewable energy business, promoting projects of close to 103MW in wind as well as in solar energy. He is also the founder of Arina Energy SAL. He holds a master’s degree in shipping, trade, and finance from the Cass Business School, London.

Share on:
TBY talks to Albert Khoury, CEO of Hawa Akkar, on being the pioneer energy producer in Lebanon, developing wind energy, and prospects for the sector.

How much has the company grown since it was established?

Hawa Akkar was one of the pioneers in the field of utility scale windfarm projects. On December 17, 2017, the Council of Ministers issued us the first license as a private producer of energy, and this was a breakthrough. By this we had the right to produce energy as a private company, a first in Lebanon’s history. Another milestone achieved was in March 2018, when we also signed Lebanon’s first power purchase agreement. The positive aspect was that the government understood the need for the private sector, hence we invested in this particular sector and sustained all risks. With the two other ongoing projects we hope to be the first private utility scale energy project in Lebanon.

What were the factors that led to the establishment of Hawa Akkar?

There are three main causes for the 10-hour power cuts plaguing the country: generation, transmission, and distribution. In terms of generation, the biggest problem we noted was the lack of understanding regarding the resources at hand that can produce electricity. In Lebanon, the natural resources available in abundance are sun and wind, especially in the northern part of the country. We deemed it appropriate to utilize these resources and resolve the problems we were facing, which is what led to Hawa Akkar’s establishment.

What obstacles were faced during and after setup of the project?

The major difficulty was the lack of government decision-making and processes to follow. There was no precedent, and when the government decided to go with the private sector, it did not know how to proceed and so it was the start of a long learning curve. The government is the main obstacle and the solution at the same time. Law 462, which was passed in 2002 to structure the private involvement in the power sector, and which was amended six or seven times, is yet to be implemented. There is also the PPP law, which has an unknown effect on the sector. Clearer legislation, laws, and processes will lead to more investment in the power sector and Lebanon would hence be able to solve its problems.

How did you conduct the wind placement studies?

We started with installing a measurement mast that allowed us to understand the available resources. In 2011, the government developed the Lebanon Wind Atlas to detect areas with great potential for wind power. We conducted the research and are still conducting more developed wind resource, environmental impact, and social impact assessments alongside topography, geotechnical, and grid impact studies with international companies. An annual bird monitoring program for Hawa Akkar has been developed as well and is currently under implementation. On this front, we are working with the best in the field in terms of advisors and support.

What are the upcoming breakthroughs in wind power generation?

The upcoming breakthrough in terms of wind and solar energy is the battery bank industry; there is more potential for wind and solar in Lebanon than what is currently being projected. This breakthrough will come soon, and we expect it to happen in the next couple of years.

For 2018 and early 2019, I expect a breakthrough in Lebanon’s electricity sector whereby we will see projects moving ahead in terms of thermal based power production. I see some solutions in terms of grid connection, which is the transmission network, and I see new wind or solar generation capacity. 2018 will only be a transition phase as we are talking more about 2019. I am more optimistic about 2020 and 2021 as we still face many hurdles and uncertainties that we need to overcome before we move ahead. We are on the right track, though we are not cruising yet.