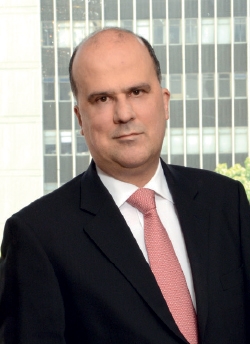 The Rules of the Game

José Darí­o Uribe received his Ph.D. in Economics in 1993. He has held the office of Governor of the Central Bank since January 2005, having been the Deputy Governor from January 1998 to December 2005. Previous positions have included Head of Research, at Central Bank from September 1993 to January 1998, Economic Adviser for the National Coffee Federation and Head of Department at the Global Programming Team at the National Department of Planning, as well as an academic career from 1993 to 2007. Uribe has been widely published in national and international journals on topics ranging from monetary policy, finance, and exchange rates, to economic growth.

Share on:
You have recently been named Central Banker of America. To what do you attribute your success? This success is thanks to a team that works with complete independence within a […]

You have recently been named Central Banker of America. To what do you attribute your success?

This success is thanks to a team that works with complete independence within a framework of inflation-targeting with a flexible exchange rate. The objectives of this framework are to maintain low and stable inflation and to smooth output fluctuations around a sustainable growth path; both objectives have been achieved. Inflation has been hovering at around 3%, our long-term target, for almost six consecutive years, and over the past decade economic growth has been exceptionally high and stable. The flexible exchange rate with a pre-announced, clearly communicated intervention has also been an integral part of Banco de la Republica´s strategy for implementing monetary policy. This was a point also stressed by The Banker when it granted me the award.

According to the IMF, Colombia has maintained sound macroeconomic performance and a strong and competitively managed policy framework. What does this evaluation mean for Colombia?

It is important for us. There is no doubt that the Colombian economy has exhibited strong resilience in the face of adverse external shocks, and this has been possible because of the presence of the three “pillars” of our macroeconomic framework: low and stable inflation in an inflation-targeting regime, a sound and responsible fiscal policy, and strong financial supervision and regulation. This framework, constructed and improved over the years, has allowed us to pursue counter-cyclical monetary and fiscal policy and has given us room for manoeuvring and dealing with external shocks.

There has been a rapid expansion of Colombian banks in Central America. How would you assess the benefits, and the main challenges, of this expansion?

The expansion of Colombian banks abroad has important benefits for the Colombian economy and financial system. Colombia and the economies of Central America are subject to different shocks, and respond differently to common external shocks. Therefore, there is an increasing diversification of macroeconomic and financial risks stemming from the investments of Colombian banks in that region.

In what ways is Colombia becoming more involved in the global economy?

This is happening through both international trade and investment. For example, over the past ten years, Colombian exports and imports have multiplied by more than tenfold. Something similar has happened with FDI. At the beginning of this century foreign investment was at around one- to one-and-a-half billion dollars a year. In recent years it has increased to $15 to $16 billion. Likewise, at the beginning of this century Colombian investment abroad was at a few hundred million dollars per year. In recent years this has increased to $4 to $5 billion per year. And both trade and foreign investment are now more diversified than ever.

What policies is the Central Bank implementing to encourage trade and investment?

Central Bank policies have made important contributions to macroeconomic and financial stability. This improves the country’s risk perception and creates a favorable environment for investment, both from domestic and foreign investors. These efforts complement an institutional framework characterized by clear and stable rules for foreign investors and the signing of free trade agreements with several countries, including the United States.

How is the inflation rate being kept stable?

Our main instrument for monetary policy is the short-term interest rate. When aggregate demand falls below its sustainable level and the economy faces inflation below target, our policy reaction is to lower the interest rate. In contrast, once the economy recovers its growth pace and threatens to overshoot the inflation target, we increase the interest rate. Inflation in 2013 was at 1.94%, below our 3% target, mostly due to temporary positive supply shocks. We expected some reversal of that in 2014, which is exactly what has happened. Our forecast for 2014 is a rate of close to 3%.

What is your economic forecast for the country in 2014 and the medium term?

For 2014 we are expecting the Colombian economy to grow at a similar rate than that of 2013, which was 4.7%; and inflation should hover slightly above 3%, which is our long-term goal. In the mid-term, we want to keep inflation at around 3% and we believe the economy can grow sustainably at a rate of around 4.5% to 5%.