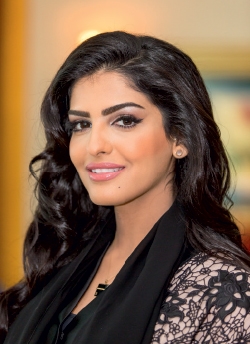 Princess Ameerah Al Taweel of Saudi Arabia, a businesswoman and a philanthropist, is recognized as an achiever and leader of her generation, who is committed to evolutionary change. She is the Founder & CEO of a holding company, Time Entertainment, which aims to revive the media and entertainment industry, while providing both employment and engaging content for Arab youth. Princess Ameerah is also the Chairwoman and Co-founder of Tasamy Social Initiatives Center with a unique and disciplined approach to funding and facilitating social initiatives to help Arab youth learn how to create sustainable small businesses that turn profits and produce positive results for their communities.

Share on:
As far as being a female business leader in Saudi Arabia, what ethical convictions have driven your desire to step out as an international figure as well as one in […]

As far as being a female business leader in Saudi Arabia, what ethical convictions have driven your desire to step out as an international figure as well as one in Saudi Arabia?

You find people who like challenges straight from the start. I was always the one in my family who was pursuing challenges in my education and hobbies. The other component is being in the right environment, and I think that Saudi Arabia’s growing economy has a lot of demand, but not much professional supply, and that makes starting a company here an advantage for me. I see a lot of demand. I love challenges and am in the right environment to allow me, as a woman, to able to start and scale my own business.

Could you explain what TIME Holding is engaged in currently?

We started with an entrepreneurial idea that is maybe not new for the rest of the world, but definitely is here. We realized then that we had to start as an events development company because there are so few aside from those in Dubai and Abu Dhabi. Then, we started TIME Events because we wanted to create opportunities for our talents, stemming from our desire to create good content and entertainment. We ran the first Saudi comedy tour, which went to nine states in the US as well as the UK. We also did an art auction for Syrian refugees where Saudi art was auctioned off, and we actually exceeded our target. We also hosted World Wrestling Entertainment (WWE) for the first time in Saudi Arabia, while our next move will be to host Cirque du Soleil. We want to bring in global events and take local artists, comedians, directors, photographers, and exhibitors to the world. We have become a bridge with TIME Events, but have realized that there is a lot of content that we are not recording, producing, or selling. So that is why we are starting TIME Production, which is a collaboration between Karim Sarkis, who owns Synch Media, and myself. TIME Production will take the amazing content of these artistic talents from the Middle East and turn them into film and YouTube videos.

Can you talk a little bit about how you perceive the business atmosphere here for women on a larger scale and how you manage it yourself?

I am not sure if my answer will be fair in that I do not represent all women. I created an open environment that many women do not feel comfortable working in, but for women like myself, this is a great country to work in due to the fact that many people do not expect a woman to know what she is talking about. The other part is that people really want to empower women, be they CEOs, government officials, or ministers. The WWE was a huge obstacle that I was able to overcome, especially being that I am a woman from Saudi Arabia. It is about having the right women in the right places; however, not all women actually want to be in that place. For those who are like me, this is a beautiful environment.

We are tired of having content driven by people who do not understand our culture and talents. We are creating shows that you will see in 2015 that are written by Saudis, acted by Saudis, and co-produced by Saudis. There are some shows that are pan-Arab, but we don’t simply want to adopt an Arab format. This is how TIME is different; we do not take global formats, but rather create our own. Shows like Arabs’ Got Talent, Arab Idol, and The Voice are all global formats.