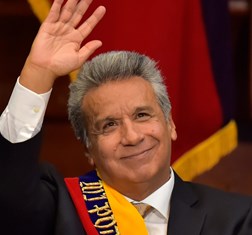 The Ties that Bind

President, the Republic of Ecuador

Lení­n Boltaire Moreno Garcés was appointed the 44th President of Ecuador in 2017. He was previously Vice President from 2007-2013. He obtained a degree in psychology from Universidad Central del Ecuador and started his career in the field of training and development. He started his public service career in 1996 at the Ministry of Government and went on to hold positions at the Ministry of Public Health. In 2012, he was nominated for the Nobel Peace Prize in recognition of his advocacy for people with disabilities.

Share on:
Greater regional convergence will strengthen the ties not only between the Ecuadorian and Mexican governments but also among its peoples.

How would you assess the potential of Ecuador-Mexico trade relations as Ecuador embarks on joining the Pacific Alliance?

Ecuador highly values its relationship with Mexico, an important friend and commercial partner. The news of enhanced relations with Mexico as a consequence of Ecuador’s entry into the Pacific Alliance has generated great expectations in our business community. The decision to join the Pacific Alliance has reinforced the confidence of our businessmen in the government’s commitment to put aside dogma-based associations and resume ties with our true friends and natural partners. The Pacific Alliance is the most appropriate platform to introduce the new economic and commercial policy of Ecuador. Trade with Mexico will take place within the framework of the last generation agreement that covers all aspects of trade. The potential of an agreement with these characteristics is enormous since it will create new opportunities in new areas such as services, investments, and regional value chains.

What steps has Ecuador taken to improve the climate for FDI?

Mexico is undoubtedly one of the main investors in Ecuador, with almost USD1.5 billion invested between 2008 and 2017, which is 21% of the total and a growth of more than 800% in 2018 YoY. We want these figures to improve. Ecuador now offers legal security, and attracting and promoting investments have been declared state policy in order to ensure greater complementarity between the development objectives and the strategies to generate employment and promote the entry of foreign currency. We created a Strategic Committee for Promotion and Attraction of Investments that coordinates the institutions of the executive to promote, attract, facilitate, specify, and maintain foreign investment in Ecuador. It also approves investment projects and accompanies investments. We are currently working with the World Bank Group to improve the investment climate, objectively evaluate the rules that regulate business activity, and establish actions in the short and medium term to improve the indicators for doing business in the country. We have the support of the Inter-American Development Bank to implement a single window of investments in which it will be able to interact through a single point with the government entities involved in the investment processes. Finally, in August 2018, the Organic Law for Productive Development, Attraction of Investments, Employment Generation, and Stability and Fiscal Equilibrium, which includes a long-term economic stability plan for domestic and foreign investors, was made official. It also provides a series of incentives to attract new investments. This law will be complemented with a Productive Development Law 2 that will include 27 new proposals for reforms in the fields of securities, productive entrepreneurship, business restructuring, development banking, public-private partnership processes, repatriation of capital, promotion of fishing and aquaculture activities, sovereign funds, and others.

Moving forward, which sectors of the Ecuadorian economy could be more attractive to the eyes of Mexican investors?

The commercial activities with the highest investment from Mexico are the manufacturing industry. Investments in transportation and communications exceeded USD60 million in 2018. Also, Ecuador has incentives to promote prioritized sectors including agriculture, food, metalworking, petrochemical, pharmaceutical, tourism, audiovisual, renewable energy, logistics services, biotechnology, software, and hardware. Likewise, investment in basic industries is being promoted, which includes the smelting and refining of copper and aluminum, steel smelting for the production of flat steel, the refining of hydrocarbons, the petrochemical industry, the pulp industry, and the construction and repair of naval vessels.

Which other areas related to foreign trade are on the top of your agenda?

Admission to the Pacific Alliance is a priority for Ecuador, and its realization will strengthen other aspects of the bilateral commercial relationship, such as productive linkages, the projection towards Asia, cooperation, and technology transfer. Trade is a powerful vehicle for regional integration and the creation of a sense of belonging to Latin America. Mexican President López Obrador is an affirmed Latin Americanist, and the interaction of both countries in a space of regional convergence will strengthen the ties not only between our governments but also among our peoples.