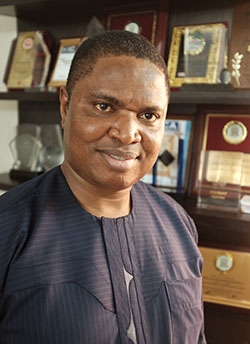 The Times They Are A-Changing

Felix Valentine graduated with a degree in Petroleum Engineering from the University of Port Harcourt, holds an MBA in International Business Management, and a Master’s degree in Economics. He began his career in the oil industry as a Production Technologist with SPDC, and is currently Managing Director of Energia Limited.

Share on:
"By this time next year, we will be open to considerable divestment."

Energia has finalized plans to build a 30,000 bpd refinery with a group of partners. Can you tell us how the project has progressed, and at what stage you are today?

We have reviewed our strategies and are now working towards a 5,000 bpd modular plan scalable to 30,000 bpd in the future. Our first move was to acquire 20 ha of land, and we are already working with the government to carry out the Environmental Impact Assessment (EIA), as well as closing our discussions on financing and partnerships. We have completed a conceptual design and are set to discuss the details of the plant with the constructors. We have designed the project to incorporate offices and support buildings, and most importantly the entire plant is modular and designed to grow as revenues enable additional capacity. Once we begin generation, investor interest will rise. Currently, we are single handedly financing the project in Nigeria. Eventually we expect the private sector in conjunction with its public counterpart to process most of our crude for domestic requirements. That spares us foreign exchange issues arising from importing. Investors will recognize that Nigeria is actually moving quickly to break ground for new refineries. Barring the unforeseen, this time next year we should be talking about foundations in the fields. In addition to ensuring consistent production, which has been plagued through frequent pipeline vandalism, the refinery plant will also be recovering more of our production. There are many losses along the way that are unaccounted for, and we still pay tariffs on the losses. A refinery allows us to significantly cut losses. With the new government, we foresee many new opportunities and a concomitant increase in investor interest.

You signed a 12″ pipeline joint venture agreement that you hoped would increase the amount of exported crude and curb theft. How is that progressing?

We have since completed the project with our partner and it has since been in operation since November 2014. This has no doubt helped in the total volume injection, but it is not a solution to vandalism, being exposed to the same environment. There have already been attempts made on the new line. We are hoping the new government can address this over the coming years. If we share our crude through the refinery, we will reduce our losses.

“By this time next year, we will be open to considerable divestment.”

In the larger spectrum of indigenous companies operating in Nigeria, what developments have there been over the past year, and what is the true impact of your efforts?

Since the marginal field auctions took place in 2003, room has opened up for Nigerians to participate. Previously, we had all been staff or managers at the IOCs, apart from one or two independents. It was the domain of Shell, Chevron, and the like, while today many more Nigerians have become involved. Then the divestments came in on top of the marginal fields, and together those factors have increased the production volume of the Nigerian independents. Shell has almost given up its onshore assets and I believe it wants to focus on gas and the larger deep, offshore prospective asset. For Energia, we have been able to create a strong presence. We are emotionally, mentally, and technically ready to play on the next level.

How has the goal of 15,000 bpd set last year progressed, and how has the decline in oil prices affected your targets and the price of assets?

The game has changed considerably, and we have ceased drilling as the margin between the costs of operation and the crude price became too wide. The industry is not yet properly indexed, so when the price of crude drops, it is not immediately reflected in the service cost. Contracts change over time. We chose to meet with our partners and to maintain production at 9,000 bpd. Hopefully, drilling will start later this year. Someone has to close the spigots at OPEC because members are already suffering. Pressure on Saudi Arabia is growing. Energia has stopped drilling, although it is more accurate to say that we have stopped exploring, because we drill to maintain production. We now have to drill better, cheaper, faster, and more efficiently such that our costs reflect prevailing low prices. In an environment of low prices one has to focus on efficiency. The industry doesn’t slow down when prices are low. At $50 per barrel, we still drill. Energia is on the progressive side, and we cannot wait endlessly for crude prices to reach $100 per barrel before we resume drilling; we shall pick up the rig once we see a fairly stable price, even at $50 per barrel.

The Petroleum Industry Bill (PIB) is awaiting government approval. What are your projections for political change?

Time is limited, and the Goodluck administration wanted to sign the PIB before it left, but the transition is already happening. There are changes taking place at the Ministry of Petroleum and also in the Senate, and there are also numerous distractions at the governmental and senate level.

What are your general expectations for the energy sector next year?

In Nigeria, we will be busy. By this time next year, we will be open to considerable divestment. The marginal field round, which was suspended, will be back on the table. There will probably be a new minister with new ideas, who might want to restructure the industry. If they sign the PIB before they leave there will be a lot of restructuring. We will be busy in aggressively participating to be part of the block put on sale to Chevron and Shell because we are ready to move to the next level. We will be busy with the foundation work of our refinery, drilling and increasing production with our current assets. There will be a lot of restructuring in the country. The election has given us a good rating internationally, and today Nigeria is a democratic society and a credible country. Energia is ready to take advantage of the opportunities set to materialize over the coming year.