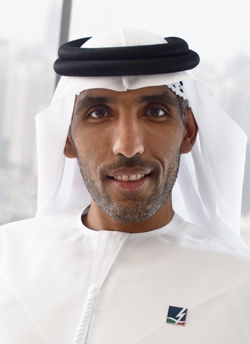 Saif Saeed Al Qubaisi has extensive experience as a leader in the water and electricity sector in the UAE, with a proven track record in project management and sustained service delivery. He joined the firm from the Executive Council, where he held the position of Energy Affairs Director. He has also worked at the Abu Dhabi Water and Electricity Authority (ADWEA), ALDAR properties, and Abu Dhabi Transmission and Despatch Company (TRANSCO). He has an MBA and a degree in Electrical Engineering.

Share on:
"The smart grid group looks at many things to do with optimizing the distribution network grid."

What is the primary objective of the Regulation & Supervision Bureau (RSB)?

The regulatory body’s primary purpose is to protect customers, and one of the ways it does that is through conservation. The less we need to produce, the cheaper electricity and water will become, which is particularly true during the peak season, so we see conservation as an over-arching goal. It comes from both our side and that of the consumer. We see it as a major way to drive down costs, but at the same time send the right pricing signals.

What are some of the current shifts and trends occurring in Abu Dhabi’s water, wastewater, and electricity sectors?

A huge amount of diversity and change is taking place. With electricity, we are seeing more renewable energy, more panels on roofs, and more involvement with customers; with more focus being put on conservation. There are many developments in the use of recycled water, particularly in the wastewater sector, where we have introduced a three-taps approach, which seeks to direct large users to the best source of water for their needs. In this connection the three taps are; ground water, drinking water, and recycled water. The more recycled water we can use and the more efficiently we use it, the less drinking water we have to produce in the beginning. The key themes of diversity and sustainability run through everything we are doing.

“The smart grid group looks at many things to do with optimizing the distribution network grid.”

What are the goals behind the RSB’s Business Continuity Management Regulations?

This is part of a much wider process; the Abu Dhabi government has introduced planning requirements to ensure that, under any circumstances, business continues. For example, we have seven power plants in the Gulf waters producing drinking water using desalination technology. We have looked at the likelihood of incidents such as what would happen if these waters become heavily contaminated. In such a situation, we can supply all our drinking water needs from Fujairah into Abu Dhabi. We have done that and tested the system and it works perfectly. We have also looked at things such as IT systems and if they would be prone to cyber-attacks. In other words, we look at how to deal with worst-case scenarios for everything.

What are some of the findings of your feasibility studies on waste-to-energy technology in Abu Dhabi?

Overall we have a good understanding of waste to energy (WtE) projects and have been working with deferent stockholders in studying these technologies. Waste-to-energy incineration plants offer a reliable form of energy production and stops the release of dangerous gases such as methane into the atmosphere. It is known as a carbon-neutral technology. However, in line with our conservation philosophy there are certain rules that apply to everyone in connection with waste. The first thing is to try not to produce much of it. The second is when you do produce waste, recycle as much as you can before burning it. The third is how you deal with the residue. The things you can’t recycle easily, such as rubber, plastic, and organic materials, are either burnt or are fed into anaerobic digestives for the organic materials. The average electricity unit costs are pretty competitive compared with other technologies.

What are some key features of the new Al Mirfa power and water project plant, and how will it add value to the sector?

The Al Mirfa plant is probably the most complex and unique one currently procured since the restructuring of the sector in 1999. Utilizing four unused plants from one of the northern Emirates with a total capacity of 400 MW generation and new gas and steam turbines, the station will have a combined output capacity 1,600 MW. In addition, some of the newer but existing thermal desalination equipment will be retained and new reverse osmoses (RO) plants will also be constructed, providing an installed water production capacity of 52.5 million gallons per day of high-quality drinking water. All this adds up to a complex project, being built on an existing site. However, the new and refurbished plant will replace old inefficient generators and old inefficient desalination plants, so this has a positive economic benefit. In addition, the old generators were unreliable and were often out of service so this new addition to the generation fleet has many benefits to the sector as a whole.

What’s the significance of the RO plant, as the first one ever installed in Abu Dhabi?

An RO plant can run independently of the need to generate electricity. At the moment, we have what is called a combined cycle and co-gen generation structure in the majority of power plants. This combined cycle operation provides waste heat for use in thermal desalination. There are problems, however, when water is needed but little electricity. Under these circumstances heat for thermal desalination must be produced by the additional firing of gas, which is possible but is less efficient than in a co-generation mode of generating electricity and producing water simultaneously. With RO, you can use electricity from anywhere in the sector as water is pushed through filters so with this technology the water sector can grow at a different rate to the electricity one. RO can also be used with nuclear power. It is part of where the future is likely to go—more RO.

What can you tell us about the Shuweihat 3 (S3) power plant and its role?

The S3 power plant will be operated by Shuweihat Asia Power Company (SAPCO) and is a joint venture with Korea Electric Power Corporation of Korea and Sumitomo Corporation of Japan. The plant has been commissioned and is fully operational. It is a 1,600 MW, gas-fired plant that only produces electricity with no water. The importance of that plant is that it is seen more as a peaking plant. If you look at our load profile over the whole year, the water drops off about 10% between summer and winter. However, on electricity, it drops off about 50%-60%. It doubles in the summer, nearly all driven by air conditioning. You need a peaking plant for the summer months, but not for the whole year. The structure of the contract for this plant is that it can be shut down for four months of the year and the S3 plant is specifically designed for that summer purpose.

What are the objectives behind the smart grid development group you have recently established?

The smart grid group looks at many things to do with optimizing the distribution network grid and in particular demand-side management. The Bureau (through our Powerwise office) is running some trials on five government buildings where we have gone in and disconnected the load during the peak on air conditioning units by about 20% for an hour. We measure humidity and temperature, and we found it hardly makes a difference internally. Eventually, we are looking at the ability of the transmission control center to send out a broadcast to disconnect parts of air conditioning load rather than keep building more gas-fired plants. This may mean that, for private customers, we will have to enter into certain commercial arrangements so as to allow such disconnections, but we are yet to establish any rules in this regard. However, there are many exciting opportunities in the sector to make a real difference using demand side management strategies, so there is much to do in this regard.

With the focus on sustainability and addressing climate change, what ways do you expect industry regulations to change in the next decade or two?

I think the key thing will be passing regulations for large users. For example, Malaysia requires all large users to identify a specific person in the company who is responsible for energy efficiency. We are looking at the possibility to issue similar regulations. We are trying to make the regulatory environment more prescriptive regarding the enforcement of conservation, rather than just people voluntarily conserving. Irrigation standards for water are also changing in this regard. We have regulations for the quality of the water that leaves the wastewater sector; however, not for how that wastewater is used. Our focus will be on the wise-use of irrigated water.

How do you see the role of the RSB evolving as Abu Dhabi continues toward its goal of being 25% powered by nuclear energy and 7% renewable energy by 2020?

Abu Dhabi has four new nuclear power plants being built, which equates to 5,600 MW. By 2020 we expect to have an installed capacity of about 20,000 MW, making nuclear slightly more than 25%. The key thing to note is that 25% is referring to the installed capacity, not the amount of energy produced from nuclear. The amount of energy produced in MW hours could well be 40% because nuclear plants are base-load plants, which means they run all the time with a lifespan of 60 years. They will become the backbone of the sector, and anything else we use will be used to support the variation of load. Because nuclear power is relatively more expensive, the only way to keep the cost controllable is to run that asset all the time. However, over time nuclear power will be seen as the cheaper option with very little volatility in the uranium primary fuel, which will not be the case for gas plants. With nuclear, fuel costs are only about 15% of total costs, whereas for gas plants it can be between 50% and 75%. Fast forward to 2020 and beyond, and nuclear in real terms will be cheaper. Admittedly, there is massive complexity and high capital costs up front, but over the long term you have a run of 60 years, at gradually diminishing costs.

In terms of that 7% target for renewables, what sources will be leading the way in Abu Dhabi?

Photovoltaics will be leading the way forward. Renewable energy plants are also must-run plants. One disadvantage of renewable energy is that you must run such plants whether you need the electricity or not, but you can’t control when it is available. The key that will unlock all renewable energy generation is storage. We foresee many developments in storage because otherwise you are only able to use the energy when the wind blows or when the sun shines. The whole world is still waiting for that to happen, not just Abu Dhabi. Diversity is the important thing.