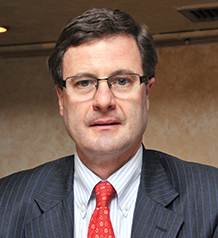 Luis Fernando Andrade Moreno, is the President of the National Infrastructure Agency for Colombia (ANI) since August of 2011, appointed by President Juan Manuel Santos, after having presided successfully the consultancy Mckinsey & Company Colombia for almost 17 years. In that period, he advised the reorganization of companies in the country. He has also been partner of Mckinsey & Company in Sao Paulo, Brazil, and associate consultant for the same firm in New York. He has a degree in industrial engineering from the University of Florida, and an MBA from Wharton School of the University of Pennsylvania.

How effectively do you feel the administration is meeting its schedule at the moment?

We have an ambitious schedule, have closed the first 10 projects. These represent $6 billion in investment, which in itself is a record for any concession program here in Colombia. We have four packages, and expect the second package to be awarded by June 2015. We will start the third package in May 2015 and expect to have that awarded by December 2015. In parallel to these three, we will have a fourth package, which we designate as private initiatives for unsolicited offers. They are projects that the private sector brought to us, for which we have been negotiating for quite a few months and are now ready to begin publishing in the market to obtain alternative offers. If everything goes as planned, by the end of 2015, we should have $24 billion of road works contracted through the concession system.

How many contracts have been awarded so far?

We have been awarded 10 so far, and have completed the first group. The companies that have provided the most offers in this process have been Odinsa, Condor, the Solarte Group, Kofi Colombiana, which is part of the Aval Group, and the KMA Group, the Amin family. They have played a significant role in binding together the consortium, and are leading the different consortiums that are participating.

Would you say that all the conditions are present for investors wanting to invest in the 4G project?

We have introduced numerous improvements along the way and now have a system that is effective in attracting foreign companies. We have received offers from 11 foreign companies in this process, which was unheard of before. We have received offers from five Spanish companies, and additional ones from Portugal, Israel, the UK, Mexico, China, and Costa Rica. All of these are leading companies in their home countries, which confirms that we are going about business the right way.

How significant is the port development around Cartagena?

Cartagena has become an important hub, and is today probably the most efficient port in the southern Caribbean. It was important to have a deeper access channel, as with a depth of 20m it can accommodate large crude oil carriers and post-Panamax vessels in the bay of Cartagena. This is important for the competitiveness of the port, and is mainly focused on the petroleum and large container vessels that navigate the Panama Canal.

How effective has PPP law 1502 been in fostering greater collaboration between the public and private sectors?

That law was issued at the end of 2012, but like everything related to infrastructure, it takes time to come to fruition. When you see the number of projects that we are awarding and our extensive pipeline, you can but conclude that the law was successful. And when one considers the Colombian economy, it becomes apparent that housing and infrastructure are determining its current growth. The law has been successful in achieving its objectives, and we think that over the coming six years, through 2020, the main engine of growth in Colombia will be the construction sector.