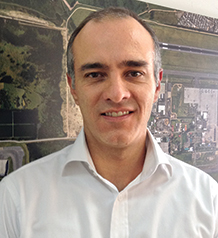 Andres Ortega studied Business Administration at CESA, and later undertook an MBA at the Instituto de Empresas in Madrid, Spain. He joined OPAIN in 2008, undertaking various financial and administrative management roles, before occupying the position of general manager in March 2014.

Share on:
TBY talks to Andrés Ortega Rezk, General Manager of OPAIN, on airport construction, new routes and connectivity, and investment in the domestic airline industry.

What was the purpose of the OPAIN concession?

OPAIN is an all-purpose entity. Basically, once the concession was awarded, the company was created in order to fulfill the duties of the concession contract. It is a company that only focuses on this concession contract. Since 2008, we built the new passenger terminal. We have also built a cargo terminal and several other buildings that are for operation support. We built around 230,000sqm of buildings. We have fulfilled all duties in terms of security and operational capacity, including maintenance. We also leased all the commercial areas that are available. We have seen notable commercial success among those tenants. We are now trying to close a deal with the government to expand the passenger terminal by a further 50,000sqm. This is a voluntary project. The works are worth around $160 million. This is our program for the next 24 months and will be part voluntary, and part government funded to a total of around $300 million.

How are you attracting and working with different airline companies?

We are trying to develop new routes and destinations to create more connectivity and have steady traffic growth. We visit them in either their headquarters or in some events that are held throughout the year with the airlines and airports. We have been successful so far in bringing new airlines and opening new destinations with the airlines that currently use the airport. We are offering them $5 or $10 depending on the route per in-plane passenger and destination in Bogotá for the first year. While that is a small incentive regarding the huge cost of an airline opening a route, it helps somewhat with their deployment costs here.

How much will this boost the impact of the airport in the near to mid-term?

It depends on the route and on the type of plane that the airlines use. Of course, we have 737s and 747s, which are almost four times bigger than others. We are projecting our natural growth and then adding additional growth by bringing more airlines to help growth. KLM just started, for example, and Portuguese TAP started last year. We will have Turkish Airlines by the end of this year. There are also new routes for Avianca to London and Los Angeles. We have new routes to the Caribbean as well, provided by a small airline based in the Bahamas.

What is your key long term goal in terms of overall operations?

We are aiming to have highly-trained airport staff capable of delivering great passenger service. We want to be the best airport in Latin America in terms of passenger experience. Skytrax is a means of measuring our performance, knowing where we are getting it right, and where we can improve. We are raising the bar every year and hope to provide the best passenger experience in Latin America.

How could the airline boost its foreign investment?

Some of the most important investments that we need are being made directly by the Civil Aviation Authority. They are changing their equipment and procedures and installing new technology that will allow us to have more operations. Right now we realize 57-58 operations per hour. With these changes, the Civil Aviation Authority is aiming to have 85-90 operations per hour, marking a huge improvement in take offs and landings. The government is investing heavily and within 18-24 months we are set to have all equipment, operational changes and procedures and new technology in place allowing for greater effectiveness and efficiency. We are growing the terminal in areas that will allow us to continue our growth for five to seven years, which is quite standard for any airport. In the past, we had airports for 30-50 years, but that is no longer possible with the traffic growth. And meanwhile, there are new commercial areas that are set to compensate for the amount we need to invest.