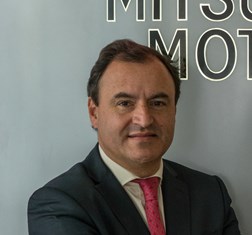 Share on:
By leading the push to make trucks 100% electric, Mitsubishi is securing its place in Portugal and Europe's most popular categories.

Globally, the company is present in eight markets, with more than 25 brands. Can you elaborate on your parent company’s structure, operations, and achievements?

Our company is part of the Bergé Group, which is based in Spain and present in eight markets. In Europe, we have a presence in Portugal, Spain (including the Canary Islands), and Finland. In South America, we have a presence in Chile, Peru, Argentina, and Colombia. We are a distribution company, representing 26 brands in our current portfolio. We also have some retail operations, but most of our dealers are independently working as our partners. At present, we manage more than 500 dealers in eight markets. Our aim is to distribute 150,000 units in these markets by end-2018. In Portugal, we have four companies: the distribution of Mitsubishi and Fuso is managed by one company, the distribution of Kia and Isuzu in two others, in addition to a company that provides services for all companies. Our yearly target for the Portuguese market is 12,000-13,000 cars.

How important is the Portuguese market for the overall group’s operations?

It is highly important for several reasons. It was the first operation outside of Spain and has grown significantly; about 30-40% of our European activity is now in Portugal. It is also vital because Kia and Mitsubishi are very relevant brands for Bergé in Portugal.

The Mitsubishi Outlander PHEV recently had a successful launch. How would you assess the shift of conventional vehicles to electric ones?

We represent Mitsubishi in five markets: Chile, Peru, Spain, Portugal, and Finland. Mitsubishi was the first company to introduce the PHEV technology into the market and made a huge effort doing so. Recently, a number of brands have been entering the European market with new technology. Initially, companies that wanted a green footprint were interested and became early adopters, but there was also a lot of lack of knowledge about the products and their usage and reliability. Now that customers are starting to understand the benefits of these technologies, it is becoming easier. Our volume has also significantly grown, and should continue to do so. These represented 7% of sales in 2018, a number we hope to double in 2019. European regulations being implemented in our market are also accelerating the adoption of PHEV technologies.

Mitsubishi is a strong partner in the Renault-Nissan Alliance, the group with the biggest sales of electric vehicles in the world. A lot of solutions are being developed within this, and Mitsubishi will participate in these and enjoy the efforts of the Alliance. With Mitsubishi and Fuso, we have quite a strong business in commercial vehicles based on the pickup and Fuso trucks, which represent almost 40% of our volume. Electric vehicles will progressively increase their share, though Mitsubishi will also remain focused on SUVs and pickups.

In 2017, the truck division of Mitsubishi and Fuso had a positive impact on the Portuguese economy. What future developments are in the pipeline for this plant?

Fuso has a plant in Portugal and is part of the Daimler Group. It produces the product that we sell in Europe and also exports special projects to the US as well as several countries in Africa. In Portugal, Fuso is highly relevant because it has had an industrial presence for a long time. Portugal is home to Fuso’s biggest market share in Europe, and we are proud to represent the brand and succeed with it. We have been selling cars for over 35 years and have sold more than 80,000 trucks in the market. Looking to the future, Fuso has been leading the development to make urban trucks 100% electric, and we have been participating in this project. At present, we are testing 10 vehicles as a part of Fuso’s global project, which is testing cars in New York, London, Amsterdam, Berlin, and Tokyo. The electrification of urban trucks has huge potential to have an impact on cities.

Was the Lisbon city hall looking for an electric tender, or did you seek them out?

We wanted to test the vehicles, and the government was keen to participate in the project. The technology is still not being sold commercially but it is keen to participate and have these cars as soon as possible. It came onboard as soon as we explained what we wanted to do. The fact that this leading technology for trucks in Fuso is being produced in Portugal is also relevant for all parties involved in the project.

What are your priorities for the coming year?

Our market has now come back to pre-crisis levels, and we are mature in Portuguese terms. We are optimistic for 2019, but are aware that it will not be significantly different than 2018. Within our portfolio, we see several opportunities to consolidate and grow our business, and that is what we will be focusing on in the coming year.