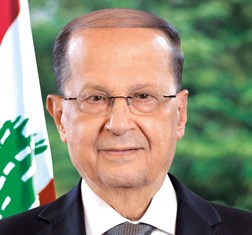 Michel Aoun was elected president on October 31, 2016 on the 46th electoral session of the Lebanese parliament, breaking a 29-month deadlock. He is a Maronite Christian and the founder of the Free Patriotic Movement. Aoun was appointed as Lebanese Army General in 1984. From 1988-1990, Aoun served as Prime Minister after being appointed by the then departing Lebanese President Amine Gemayel as head of the Lebanese government and interim prime minister.

Share on:
Michel Aoun, President of the Lebanese Republic, on the need to join forces to boost the economy, Lebanon's economic successes, and working to deploy the country's strengths.

We must not allow the devastating conflicts in our regional surroundings to veil the truth of the ongoing steadfast progress in our Lebanese national life. Indeed, nothing will prevent us from walking steadily toward the set goals, and from scoring acclaimed achievements in the coming short period of time. It is unequivocally evident that the period elapsed from my election has witnessed the revival of the constitutional institutions, namely the Presidency of the Lebanese Republic, Parliament, and the Council of Ministers. Subsequently, countless pressing laws and decrees were enacted after having been delayed during the years of vacancy and loss. In the same direction, the publication of legal and executive texts pertaining to gas and oil may, if coupled with the proper geological results, move Lebanon to a new economic era and turn it into an oil-producing country whose people live in affluence and ease.

Although I rest assured by the results that have been attained lately, my main concern is currently focused, above anything else, on the huge economic workshop ahead of us. I am determined to make it the foundation of the state’s action for the years to come of my tenure.

As I say this, I am full of confidence that success in the required economic duties is possible and guaranteed, if the political forces represented in the government and Parliament sense how critical are the socioeconomic circumstances besieging the Lebanese society. They must join forces and demonstrate genuine solidarity with each other to face the crisis, and the Lebanese must show, each from their position, their willingness to make their contribution to get out of the tunnel.

My confidence in Lebanon’s capacity to reach political solutions stems from my faith in Lebanon, with all the exceptional economic capabilities and potentials it is packed with, thanks to its geographical position, its openness toward the East and the West, and the excellence of the Lebanese citizens in the fields of science and work, as well as the authenticity of the internationally renowned educational institutions which have been in the country for hundreds of years.

Above all this, Lebanon has proved its credibility to resident and non-resident investors, in terms of firmly holding on to the fundamental economic rights and freedoms, namely the right of property, the freedom of foreign exchange transactions, and the unrestricted money transfers between Lebanon and the outside. Our system stood up in the face of all the storms that hit Lebanon in the middle of the past century. And here it is today, standing strong and sound, determined to support the desired economic progress. Its assets exceed four times the current GDP, it has a high solvency according to international standards, as well as a high liquidity, and it plays a major role in financing the Lebanese economy by ensuring the credit requirements in both public and private sectors.

Based on our faith in the future vision, in a country thirsty for progress and for accompanying the renewed global economy, the Lebanese state concluded an agreement with one of the largest consultancy firms in the world to come up with a concep to tackle existing problems and discover the strengths in the economy in view of extracting and deploying all the potentials and sectors in a drastic process aimed at the long-term development of society and the economy.

We shall not settle for the mere latent economic potentials or Arab and international support; we rather intend to accompany this with comprehensive measures aimed at fighting corruption and promoting transparency in running the state. This is not a condition imposed on us by the international community as has been rumored, but it is our choice and first aim, and the path that expresses our own convictions and our faith in the sound principles of state administration.

It is the path that we will strictly take at all costs.