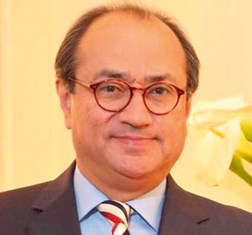 Top down and Bottom up

Otto Granados Roldán has had an extensive career as a public servant. At the Secretary of Public Education, he was previously Deputy Secretary of Planning, Evaluation, and Coordination, where he supervised the implementation of the education reform. He formerly he served in a variety of public roles, such as Governor of Aguascalientes, Mexican Ambassador to Chile, and General Director of Communication at the President’s office. He holds degrees in law from the National Autonomous University of Mexico (UNAM) and in political science from El Colegio de México (Colmex).

What have been the biggest challenges and achievements in implementing the education reform?

The education reform, which affects one of the world’s biggest education systems—some 25 million students and 1.2 million teachers—was undertaken from our need to go from a system whose main achievement during the 20th century was universal educational education coverage to one that meets the qualitative needs of the 21st. To do so, the constitutional reforms have set up a system to grade teachers’ merits and tie this to their income, continuity, and eventual opportunities for promotion. By implementing fair and transparent assessment processes, these teacher evaluations have given us a more qualified recruitment process and merit-based promotion. They also allow the education system to improve by identifying those teachers most in need of training. So far, more than 1,242,000 teacher evaluations have been made, of which 919,288 have been enrolled in periodic training courses and more than 820,000 have received training for carrying out the new study program. What is more, 90,738 teachers have received a 35% salary increase, which over their careers can go as high as 271% throughout their careers. Apart from that, we now have accurate information about schools’ deficiencies and teaching resources, thanks to the Census of Schools, Teachers, and Elementary School Students.

How are you cooperating with the private sector to promote dual education within the context of the fourth industrial revolution (I4.0)?

Technology and knowledge transfers represent a virtuous cycle in the educational and productive sectors, whose defining criteria are possible thanks to strategic alliances made with the productive sector. One of the alliances we made was a dual education cooperation between sectors through consensus and interaction with decisive stakeholders such as the Chamber of Commerce, which represents strategic productive sectors such as manufacturing, services, agricultural, and processing industries. Under this alliance, we perform foresight exercises to know where the labor market is moving and adjust the provision of education accordingly to higher demands. In the long run, this will provide more competitive salaries, increase formal employment, and improve overall employment

What is your strategy for raising Mexico’s results in the PISA test, and what are the country’s goals concerning this examination for the next five years?

In coordination with state governments, the Secretary of Public Education has a strategy for strengthening the skills and learning of students between 15 and 16 years of age. The results from 2015 put the country at minimum proficiency levels. For this reason, the strategy aims to enhance skills in three areas of the test and to make students and teachers more comfortable with the type of assessment tools used by PISA. Among the actions taken is the “Getting to know PISA” course done with the support of the Carlos Slim foundation through the PruébaT platform, which offers students and teachers digital tools similar to PISA exercises.

Recently, a sixth round of National Education Infrastructure Certificates (CIEN) was issued in the Mexican Stock Market (BMV). How have investors received this financial vehicle and what are the current needs of public schools in terms of infrastructure?

In May 2018, the sixth round of CIEN was issued at MXN900 million on the Mexican Stock Exchange, which means an investment of MXN40 billion for the program. The source of these infrastructure certificates is the States Contributions Fund, which represents less than 1% of the federal tax collection, making it a stable and viable resource. This is not about taking loans in order to invest but using an asset that the states already have. As part of the education reform, we carried out a census on the conditions of educational infrastructure around the country. By doing so, we chose the school buildings with the greatest need in every state. This program is expected to benefit 6 million students through investments in 33,000 schools.