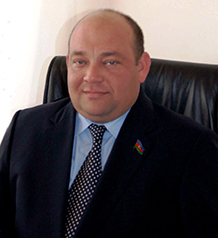 Top of the Assembly

Chairman of the Supervisory Board, Ganja Automobile Plant Production Association

Share on:
At a time when automobiles account for a large share of imports to the country, how does the Ganja Automobile Plant help to substitute imports with domestic production? Azerbaijan used […]

At a time when automobiles account for a large share of imports to the country, how does the Ganja Automobile Plant help to substitute imports with domestic production?

Azerbaijan used to import almost all types of automobiles until our enterprise commenced operations in December 2004. The Ganja Automobile Plant currently manufactures 20 models of MAZ, six models of KAMAZ, three models of URAL trucks, and eight models of Belarus tractors. In addition, at the end of 2015 we launched the experimental assembly of two models of MAZ buses. The production of these automobiles in Ganja also led to a reduction in their imports. The hardware manufactured by our qualified specialists meets all applicable standards and is in great demand. This can be inferred from the numerous orders placed with the company by the state, business people, and companies. In 2015, our company achieved the highest result in its history by assembling 948 units of hardware on the basis of different models of Belarus tractors, 354 MAZ automobiles, 10 KAMAZ, 23 URAL trucks, eight HALLER public work trucks, and five Belarus trucks. The production of these automobiles in Azerbaijan certainly prevents the outflow of foreign currency from Azerbaijan, thus contributing to non-oil sector development. The Ganja Automobile Plant is currently working on exporting this hardware to foreign countries. In 2015, we succeeded in selling 10 units of hardware to the neighboring Republic of Georgia. The company’s marketing and service department is in talks with a number of countries regarding the exporting of our products. We intend to launch the production of 72 and 102-seat MAZ buses in the near future. These models meet the most stringent comfort requirements and fit very well into the domestic market. We look forward to seeing these buses in Azerbaijani cities and districts in the coming years. This production will enable our company to compete with similar bus models imported to the country.

You have been awarded the Order of Glory from the Government of Belarus in recognition of your contribution to the strengthening of Belarusian-Azerbaijani relations. How would you assess the level of cooperation between the Ganja Automobile Plant and Belarusian companies?

Cooperation between the Ganja Automobile Plant and Belarusian companies was launched in October 2006 during an official visit of President Ilham Aliyev to the Republic of Belarus. It was during that visit that an agreement was reached to establish economic relations between the two states, including collaboration between the Ganja Automobile Plant and Minsk tractor and automobile plants. Following the visit, as agreement was signed with these plants and a new assembly line was installed in our facilities. The cooperation between our enterprises stems from the friendly relations between President Ilham Aliyev and President of Belarus Alexander Lukashenko. It is thanks to this warm and sincere relationship that the First Deputy Prime Minister of Azerbaijan, Yagub Eyyubov, and myself were awarded the Order of Glory from the Government of Belarus in October 2015. I am grateful to the heads of both states for this prestigious award. Our bilateral agreement paved the way for the assembly of eight models of Belarusian tractors in March 2007. A total of 6,294 tractors and 134 special purpose tractors were assembled by our plant from that date until January 2016. Of this machinery, 5,737 units were handed over to AgroLeasing OJSC on the basis of a state order, while the remaining 497 units were acquired by farmers and business people. In April 2007, our company started manufacturing MAZ vehicles called “Ganja“ and “Pahlavan.“ As of January 2016, we assembled a total of 2,578 MAZ trucks of 20 models. Our relationship with Belarus is not limited to that. According to an agreement with the Belarusian plants DorElektroMash and Smorgon Aggregate Plant, the assembly of suspended equipment on the basis of Belarus tractors began in September 2007. To date, 82 MUP, 36 DEM excavators, 11 asphalt laying machines and snow removers, and five loading machines have been assembled and commissioned. An agreement was signed with the Belarusian MogilevTransMash OJSC in 2009 and a total of twelve 25-ton auto-cranes have been assembled. In 2010, a trilateral agreement on the assembly of public works machinery was signed between the Minsk Automobile Plant, the German company Haller, and the Ganja Automobile Plant. To date, 47 units of such vehicles meeting the Euro-4 standard have been manufactured. In 2013, a bilateral agreement was signed with the Minsk wheeled traction vehicles plant. According to this agreement, our plant commenced the production of wheeled traction vehicles in 2014. We have already assembled 30 such vehicles. According to an agreement signed with the Belarusian Bobruysk plant of spare parts and equipment in May 2014, we have started the production of MTZ 422 and MTZ 622 mini-tractors. So far, we have manufactured and commissioned 68 units of this machinery. In February 2015, the Ganja Automobile Plant and MTZ Holding, under the umbrella of the Minsk Tractor Plant, signed a long-term partnership and cooperation agreement. This has led to the assembly of Belarusian tractors and MAZ automobiles by our plant.

The president of Tatarstan visited the plant in 2015 to inaugurate the opening a line for the assembly of KAMAZ automobiles. How would you evaluate the progress in the production of KAMAZ vehicles at your plant?

The Ganja Automobile Plant follows the motto “Step by step towards new successes.“ Our plant continuously looks for new innovations, projects, and partnerships. A growing number of major companies are interested in cooperating with our enterprise. In February 2015, a delegation led by the director of Russia’s automobile giant KAMAZ, Sergey Kogogin, visited Ganja to become acquainted with our plant. KAMAZ managers were very impressed with our plant and the overall professionalism of our team. An agreement on the assembly of KAMAZ vehicles was signed between the two companies. A production area of 3,500sqm has been created at the Ganja Automobile Plant and a new assembly line fitted with lifting mechanisms and ball bearings has been installed. Our enterprise is currently engaged in assembling KAMAZ trucks. In April 2015, a ceremony was held to unveil the KAMAZ 43114-053-15 full transmission passenger and cargo automobile. The ceremony was attended by the President of the Republic of Tatarstan, Rustam Minnikhanov, and other senior officials. The assembly of these automobiles is well under way now. According to this long-term agreement, we intend to assemble about 30 models of KAMAZ vehicles at the initial stage. As of January 2016, our plant assembled 10 models of KAMAZ automobiles. KAMAZ vehicles are well known not only in the Russian Federation, but also in the whole CIS for their impressive carrying capacity. We are very proud to assemble these automobiles in Ganja because there is a great demand for them in Azerbaijan. We look forward to these trucks reaching the customers both in and outside Azerbaijan.