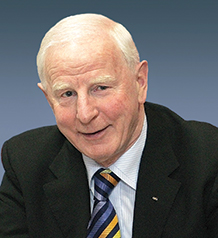 Top of the Podium

Patrick Hickey is the President of the EOC, the organization responsible for serving the needs of Europe’s 50 IOC-recognized National Olympic Committees. He is also the President of the Olympic Council of Ireland (OCI), a position he has held since 1989. He has been an IOC member since 1995 and joined the Executive Board in 2012. He is also the Senior Vice President of the Association of National Olympic Committees (ANOC), and last year he became the IOC’s Delegate Member for Autonomy. In his role as EOC President—to which he was first elected in 2006—Hickey has been influential in pushing through plans to stage the first ever European Games. His career in sports administration includes a decade as President of the Irish Judo Association between 1979 and 1989, and a spell as General Treasurer of the European Judo Union in 1990. As an athlete, he excelled in Judo, becoming the Irish national champion.

Share on:
TBY talks to Patrick Hickey, President of the European Olympic Committees (EOC), on Azerbaijan's preparations for the Games and the legacy they will leave.

Azerbaijan won the tender in 2012 to host the upcoming European Games. What are some of the advantages that promoted Azerbaijan as the best candidate?

Baku and Azerbaijan made a compelling pledge to the EOC to host the inaugural European Games back in 2012. Azerbaijan’s concept was innovative and offered an assurance that all infrastructure would be ready on time and delivered to the highest international standards, with strong legacy plans to elevate sport throughout Azerbaijan, the region, and the continent. The Baku 2015 European Games Operations Committee (BEGOC) is delivering on all these promises as they now move into the final testing and readiness phase of their preparations.

Preparation for the Games have picked up with over 1,000 workers currently employed in anticipation of the event. How important have BECOG workers been in supporting the event?

It has been very important. BEGOC has only had 30 months to deliver these Games. To stage an event such as Baku 2015—which is bigger in scale than the Olympic Winter Games—in such a tight timeframe has only been possible through the hard work and professionalism of BEGOC’s staff. However, behind the excellent work of BEGOC is total government support. The country’s senior figureheads, President HE Ilham Aliyev and the First Lady Mehriban Aliyeva, are both sports people through and through. The First Lady is the Chair of the Baku 2015 Organizing Committee and the President is also the Head of Azerbaijan’s National Olympic Committee. Their support and passion for the European Games has been crucial.

The Games are one of the most significant events in the recent history of Azerbaijan. With that in mind, what long-term possibilities do the Games provide?

Azerbaijan is already starting to realize the long-term benefits of hosting the European Games. Since 2012, the city has secured other high-profile sports properties, such as an Formula One Grand Prix in 2016, the Islamic Solidarity Games in 2017, and matches at EURO 2020. Baku 2015 opened the window for the sports world into Azerbaijan, and the country has seized its opportunity. On a community level, there are also many long-term opportunities. After the Games, Baku will have 18 new or refurbished world-class venues at its disposal, and these will encourage one of the youngest populations in Europe to follow a sporting lifestyle.

As these are the first European Games, what are some of the challenges you face in bringing it to fruition?

When the EOC awarded Baku the right to host the inaugural European Games in 2012, there was no precedent or blueprint for BEGOC, or us, to follow. Obviously, there are other established continental multi-sport events, such as the Pan-American Games or the Asian Games, but what works in Asia or in the Americas will not necessarily fit in with Europe’s sporting landscape. Hence, starting from scratch was a challenge, but we saw it more as a massive opportunity to be innovative and to fit the Games around Europe’s specific needs. Innovation is evident in every part of our hosting concept. The sports program includes exciting disciplines like 3×3 basketball, karate, and beach soccer. There is also space for sports that are locally popular but not known widely across Europe, such as sambo. Further innovation comes from the fact that there are no para-sport divides at Baku 2015; for example, blind and visually impaired judo is a fully integrated medal event. Commercially, there will be in-stadia branding for Games partners and supporters, which, of course, is not done at an Olympic Games and allows sponsors of the event to enhance their commercial return. The innovation behind the European Games also helps us address another challenge making Europe aware and communicating about why these Games are a necessary introduction to the sports calendar.