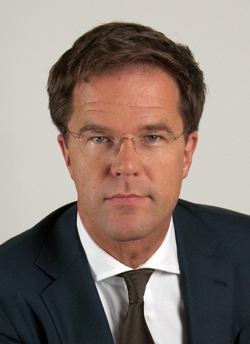 Prime Minister, the Kingdom of the Netherlands

Upon graduating with a degree in Dutch history from Leiden University Mark Rutte joined Unilever, as human resources manager, also overseeing several reorganizations. In terms of his political career from 22 July 2002 to 17 June 2004 he was State Secretary for Social Affairs and Employment in the first and second Balkenende governments. From 17 June 2004 to 7 July 2006 he was State Secretary for Education, Culture and Science in the second Balkenende government. From 29 June 2006 to 8 October 2010 he was the leader of the VVD party. And from 14 October 2010 to 5 November 2012 he was Prime Minister and Minister of General Affairs in the Rutte-Verhagen government, retaining the positions in the Rutte-Asscher administration.

Share on:
"Quite a number of Dutch multinational companies have located their regional offices in Malaysia."

Malaysia and the Netherlands have a history of strong bilateral relations. How have these evolved in recent years, and what makes Malaysia an important political, economic and security partner for the Netherlands today?

The relationship between the Netherlands and Malaysia goes back a long way. In 1957, the Netherlands was one of the first countries to establish relations with Malaysia following its independence, and we have enjoyed excellent ties ever since. Trade and investment relations have developed particularly well over the past few decades as our economies have grown. The Netherlands is Malaysia’s second export destination, and is currently the second trade and investment partner in South East Asia. Despite the geographical distance between us, Malaysia and the Netherlands have various similarities. Both countries are multicultural and multi-religious, and, despite being relatively small, are among the world’s leading trading nations. I am pleased that our shared interests have allowed for the flourishing of our bilateral relationship in recent years. Since the MH17 tragedy, we have grown closer as grieving nations. During my visit in November 2014 and during my recent meeting with Najib Razak at the Bo’ao Forum in China, I underlined our strong bilateral ties, our long-term economic and trade relations and the importance of our cooperation in the aftermath of the MH17 tragedy.

There is a strong Dutch business community in Malaysia, with many Dutch multinational companies having set up regional offices here. What are the advantages of Malaysia as a destination for Dutch investors?

Quite a number of Dutch multinational companies have located their regional offices in Malaysia because of its excellent business climate. More than 200 Dutch small- and medium-sized enterprises are also active in the country. I believe that Malaysia’s ambition to transform into an innovation-based economy and the identification of several National Key Economic Areas make Malaysia a “Hub into Asia” for key Dutch sectors such as chemicals, energy, logistics, agriculture and food, and horticulture. During my visit to Kuala Lumpur in November 2014, I had a fruitful meeting with members of the Malaysia Dutch Business Council, who are active in promoting trade and investments between Malaysia and The Netherlands. When I asked them what was needed to improve the business climate in Malaysia even further, the MDBC had to point out that Malaysia already outperforms the Netherlands on the World Bank Doing Business Indicators. Malaysia was ranked sixth in 2014 and provides the facilities that Dutch companies need to deliver high-quality goods and services. Furthermore, the workforce is educated and multilingual and the country has well developed infrastructure, including excellent roads and a strategically located, well-connected airport and harbors. Business costs, such as rent, salaries, and corporation tax, are relatively low. Since the ASEAN economies are generally doing very well, Malaysia is also an attractive base for Dutch companies’ operations in the region. Another important pull factor is Malaysia’s central location within six to eight hours’ flying time of key regional financial service hubs like Singapore, Hong Kong, Tokyo, Shanghai, Dubai, and Sydney. Finally, Malaysia offers several effective incentive programs to attract foreign investors.

“Quite a number of Dutch multinational companies have located their regional offices in Malaysia.”

Negotiations are currently underway for a Free Trade Agreement (FTA) between Malaysia and the EU. How soon do you think an FTA could be finalized and how would this reinforce Malaysia’s position as the Netherlands’ main ASEAN trading partner?

Malaysia is the EU’s second largest trading partner in ASEAN, and the second country with which the EU opened negotiations on an FTA. Progress has been made since negotiations resumed in 2014; however, there is still some ground to be covered. I am confident that we will reach an agreement that is satisfactory to all parties involved. The FTA will create opportunities for economic growth, both in Malaysia and the Netherlands in sectors such as agriculture, services and investment. Malaysia is also the Netherlands’ second largest trading partner in ASEAN. An FTA would further reinforce our already strong ties.

The Netherlands attaches great importance to cooperation with ASEAN and its member states. ASEAN is increasingly regarded as a counterpart of the EU in Asia. We therefore welcome initiatives aimed at further regional integration, such as the establishment of an ASEAN Economic Community. Regional security is another important area in which we wish to learn from ASEAN’s experiences and offer our assistance. As Asia becomes increasingly economically interdependent, it is in our shared interest for Asia’s political integration, and its regional security architecture to match the pace of these developments.

What do you envisage for the future of bilateral relations between Malaysia and the Netherlands?

I hope that our economic, political and personal relations continue to grow closer. We have shown that we can endure challenges and become stronger, as we did in the aftermath of the MH17 tragedy. I also see many economic opportunities, for instance in the agriculture, gas, petroleum, water and waste management and service sectors, to name but a few. We also cherish our political dialogue. Dutch-Malaysian exchange programs for students and professors and other forms of educational cooperation will help foster a closer understanding between the people of our countries. I feel senang that we are looking to a bright future for Dutch-Malaysian relations.