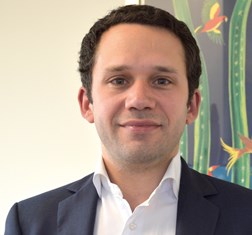 Vincent Etchebehere joined Air-France KLM in 2006 and has been General Director since May 2016. He previously served as chief of staff of the Air France KLM Executive Vice President Commercial, Sales and Alliances division in Paris. He holds a Master’s in International Management from HEC Business School in Paris.

How relevant is the domestic market in Mexico for Air France-KLM’s global strategy?

For Air France—KLM, Mexico has proven to be a strategic market, and in 2017 we celebrated 65 years of operations of both Air France and KLM in Mexico City. The most recent example of a big investment from the group was the decision by Air France to operate the largest aircraft in our fleet here, the Airbus A380, which is the biggest airplane in the world with 516 seats. We operated the first flight in January 2016, and since then have been increasing our operations with the A380. We first started to operate in combination with a Boeing 777; however, the results have been so strong with the A380 that we now operate it every day all-year around.

Can you tell us more about the recent evolution of market share for Air France—KLM between Mexico and Europe?

We are in a dynamic market, specifically on the flows between Mexico and Europe. This market has grown 6-7% per year over the past decade, showing significant growth. In 2017 alone, we saw over 10% growth for transport between Mexico and Europe at an industry-wide level. This is a market evolution on which we want to capitalize, especially as we are for the first-time number one in the market for Mexico to Europe in terms of passengers transported, a position we intend to keep in 2018. Of course, we are grateful for the trust of our Mexican clients to choose Air France—KLM, which validates the investment we made in the country, especially with the Airbus A380. With our partners Alitalia and Delta, we have more than 30% market share, Air France—KLM alone counting for 25%. Together, this four-way joint venture between Europe, Canada, the US, and Mexico shares costs and revenues and coordinates routes and schedules to give customers more choices.

Do you see any opportunities for further expansion of your operations in Mexico?

There will be the new airport in Mexico City, which is a key topic for us because the current one is in a situation of saturation. The new one will be able to meet the ambitions and potential of the country. Mexico is a large country that goes well beyond Mexico City alone, and Air France has operated the Cancún-Paris route since 2011. In addition to our direct flights, we have a successful cooperation with Aeromexico for local connections. It carries a significant volume because on average, 20% of our passengers connect to Mexican cities other than Mexico City.

How does Air France—KLM contribute to and capitalize on the success of Mexican tourism?

Flows from Europe to Mexico have increased tremendously over the past two years, to which Air France—KLM has clearly contributed. If you take the Cancún-Paris route, 95% of the passengers are European tourists coming to enjoy Yucatán’s culture, gastronomy, and beaches. When we increased the capacity of our Cancún route last year by 40%, we also increased the number of European tourists visiting Yucatán by 40%. Indeed, the number of European passengers that Air France—KLM transported in the last two years to Mexico has increased by 30%. This is a clear and key contribution to the Mexican tourism sector and economy.

Our first objective is to remain number one from Mexico to Europe. Second, we want to further improve our customer intimacy with even more personalized services at every stage of our passengers’ journey. We will open a third lounge at Mexico City’s airport together with our partner Ground Lounge Elite. Also, we are in the process of upgrading our offerings in terms of food and beverage on Air France flights to share even more French culture and identity. Such initiatives are key to keeping the loyalty of our customers in the long term.