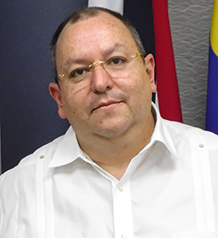 Ricardo Ospina is General Manager of Caldera Port. From Colombia, he has over 28 years of seaport administrative experience, 18 years of which were as an Elequip Port manager in the port of Buenaventura. Based in Costa Rica for the past nine years, he was in charge of two concessions, the first managing container and general cargo, the Sociedad Portuaria de Caldera, and the second for bulk, the Sociedad Portuaria Granelera de Caldera.

Share on:
TBY talks to Ricardo Ospina, General Manager of Caldera Port, on building upon good practices, the importance of free trade with Asia, and overcoming the upgrading barrier.

What is the impact of the recent partnership with the Chilean seaports company on Caldera Port?

51% of two concessions, the Sociedad Portuaria de Caldera and Sociedad Portuaria Granelera de Caldera, which manages the construction and operation of the multipurpose terminal at Caldera Port, is owned by the Chilean SAAM Group. Of the remainder, 9% is Colombian (M&H Inversiones) and 40% is Costa Rican (21% owned by Grupo Saret and 19% by Logistica de Granos). SAAM is the second-largest port operator in Latin America, with a presence in 84 seaports ranging from Chile to the US. Now, we are partnered with one of the largest seaport operators in Latin America, which has given us important competitive scenarios. We have been able to link the seaports, learn from each other, and interchange good practices from Fort Lauderdale to San Antonio in Chile. We are now part of a large enterprise, and SAAM is part of Quiñenco Holding.

It seems like a great moment for having a large shipping company going to China. Why is this so important?

The future of seaports will be in the Pacific because of the influence of free trade agreements with Asia. For example, the Chinese market has great demand for Latin America products such as Costa Rican pineapples. Traditionally, Costa Rica was focused on the US market, but now it and other LATAM countries are exporting to China and elsewhere in Asia, where demand is so high it is often hard to meet. The Asian market demand forces our countries to modernize and improve our seaport capacities and management systems in order to be able to handle these larger cargo flows and serve larger ships.

What new products and markets represent opportunities for Caldera Port?

We could generate alternative and cheaper services meant to handle cargo without having to pass through the new extensions of the Panama Canal. In Central America, the only country that has developed and improved its facilities to offer this option has been Guatemala. It has modernized its Pacific seaports as a viable option in the market, whereas Costa Rica has not. However, we have a USD150-million modernization project in the works, currently awaiting approval from the government. The idea is to become a transfer service provider and develop the capacity to receive larger vessels for direct routes to Asia.

What is the comparative advantage of Caldera Port?

The most important advantage is that we are the nearest port to Panama and could handle alternative cargo from there. We do not pretend to replace it, but the market does need transshipping services; therefore, we could have a hub that feeds from Asia to Costa Rica and then facilitates shipping to the US. Our main advantage is that we know how to operate seaports.

What challenges do you face operating in Costa Rica?

The main challenge is overcoming the upgrading barrier. Costa Rica is a small country that requires better ports, not necessarily mega ports, but a modern terminal and first-generation ports on a smaller scale. For example, TCM on the Caribbean side is developing a port that merely has two piers, whereas Caldera has four. The most important challenge for Caldera is being great enough to support the commercial flow. We need to modernize Caldera Port and improve our service supply to the extent that Caldera becomes a viable location for Asian countries.

How would you advise the Costa Rica government on upgrading the port?

It should invest USD150 million. We need investment in Caldera, not just on the Caribbean coast, where it is already investing USD1 billion. Investing in both ports would increase the country’s competitiveness. It is important to keep in mind that Limón and Caldera do not compete with each other; each port has its natural market and complement one another.