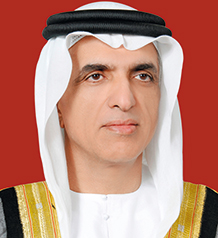 Share on:
Sheikh Saud Bin Saqr Al Qasimi, Member of the Federal Supreme Council and Ruler of Ras Al Khaimah, on what makes the Emirate such a great place to visit, do business, and invest.

Ras Al Khaimah is truly blessed. Its topographical diversity makes it a place of natural beauty, where the mountains close in on the sea with mangroves, beaches, terracotta desert, and agricultural plains comfortably arranged between the two. Its geography encouraged human settlement as long as 7,000 years ago, endowing Ras Al Khaimah with a fascinating cultural and historical legacy and its people with a unique and resilient identity of which we are proud.

Positioned strategically at the mouth of the Arabian Gulf, Ras Al Khaimah was at times during its history an integral part of the trade and communications networks that preceded the era of globalization. For centuries travelers and traders from afar would have stopped, rested, and transacted their business here. The fortunes of its ancient predecessors, such as Julfar, rose and fell many times in those 7,000 years, but it is the transformation that began only seven decades ago that will define Ras Al Khaimah for the future.

While we benefit greatly from our union with others in a confident and dynamic nation, at the same time the challenge to develop and prosper is one that rightly rests in our own hands.

Ras Al Khaimah’s vision is of an Emirate that offers the opportunity for businesses to grow and entrepreneurs to flourish in an investment climate that compares favorably with our competition; a place where visitors can experience a vacation that delivers authenticity and adventure, and where individuals can choose a residential lifestyle that is both high end and affordable.

The revolution that my father initiated began with education. He was acutely aware of its ability to transform lives, and through it, he wanted the people of the Emirate to be to be empowered. And with its acquisition came the inevitable transformation of a society wholly devoted to agriculture, animal husbandry, and the fruits of the sea into a modern and outward facing economy.

Education remains a key focus, and the establishment of the American University of Ras Al Khaimah and the Medical and Health Sciences University, both of which were designed to encourage local participation in tertiary institutions of international standard, are testament to the vision of Sheikh Saqr.

Just as Ras Al Khaimah’s landscape is fashioned from geographical variation, its economic development has been built on diversity and sustainability. Our mineral wealth does not flow from oil but is locked in the mountain rock itself. From the 1960s this asset began to be exploited, to be joined subsequently by two of the Emirate’s anchor industries—Julphar’s pharmaceutical business and RAK Ceramics, now both leading players in their respective global marketplaces.

Those early businesses launched a manufacturing sector whose GDP contribution currently stands at over 25%, with representation from a wide range of industries, from nanotechnology to mass and specialist glass production through to vehicle and cement manufacturing.

Our free zones, RAK FTZ and RAKIA, which contain over 12,000 companies, have been instrumental in growing not only the heavier industrial base but also attracting entrepreneurs keen to benefit from the competitive edge that setting up in Ras Al Khaimah can deliver.

The topography that was originally so attractive to the first inhabitants has also been important in bringing us tourists in increasing numbers. 2016 saw 10% more visitors over the previous year, and they are also lengthening their stays to accommodate all the experiences and adventures that can now be enjoyed here. New source markets such as India are being tapped into, while existing ones like the UK and Germany continue to grow. The Tourism Development Authority’s next target is 1 million annual visitors by 2019, and is on track.

An efficient and effective healthcare system is a priority for any government concerned not only for the wellbeing of its own citizens, but also keen to attract overseas talent to its shores. The healthcare structure in Ras Al Khaimah combines the strengths of the federal system with the best of the private sector, spearheaded by RAK Hospital, a unit which also has a growing medical tourism operation.

Underpinning this activity, a transportation and logistics network has been developed that is capable of handling current capacity while being upgraded to ensure that future growth is possible. The 611 national highway is moving north rapidly to link with the industrial areas adjacent to the mountains, and will not only bring a faster, more economical route for the products coming out of the region, but also remove it from our urban areas.

Our ports system, led by Saqr Port, the largest bulk handling port in the MENA region, also demonstrates diversity in its set of five separate operations that each offer specialist services, from repair to maritime free zone to leisure activity.

Standard & Poor’s and Fitch have consistently ranked Ras Al Khaimah as ‘A’ rated, marking it as an attractive and secure place in which to invest, something reinforced by a 2015 World Bank report ranking Ras Al Khaimah as the 45th most friendly territory in the world in which to do business, putting it in the top two in the Gulf. GDP growth is predicted at a strong 3% for the near future.

Investors need to be certain that their business is supported by a legal system that is fair, transparent, and efficient. We have worked to improve and develop aspects of our judiciary in order to ensure this. Through a recent agreement with the DIFC, judgments from its English-language courts system, which investors, businesses, and residents can opt in to, will be enacted by the Ras Al Khaimah Courts.

In addition, a new one-day court system for minor civil and commercial disputes has dramatically cut down procedural times for these cases. These new tools and processes are ones that investors will welcome and add another tangible reason to establishing themselves in Ras Al Khaimah.

The commitment of our citizens, residents, and investors, along with the progress already made, demonstrates our Emirate’s positive and productive transformation. Each day we continue to bring our shared vision closer to fruition. Ras Al Khaimah is truly blessed.