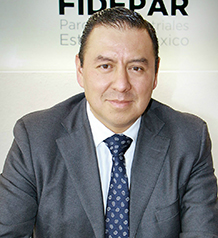 Trust Is The Key

Victor Hugo Colorado studied architecture at the Universidad Veracruzana, and later obtained a master’s degree in business administration from IPADE and a master’s in urban planning at the National Autonomous University of Mexico (UNAM). He also graduated from the Challenges of Housing for the XXI Century course at the Universidad Iberoamericana, and studied at the Lincoln Institute of Land Policy. In addition to his current position, he is a consultant in urban studies, territorial planning, and land use, an experienced project manager, and an active member of the Association of Parks and Industrial Zones (AMPIP).

What have been FIDEPAR’s landmark achievements since incorporation?

The most important success of our trust fund is that it has shaped public policy. In the beginning, our activity focused more on infrastructure, to enable companies to grow and enter industrial areas in the country. Industrial parks in Mexico began to develop in 1940. However, we encouraged a change in regulation to provide these areas with the services and infrastructure they required. We are helping to regulate the market and are encouraging companies to expand activities and move into these industrial zones. FIDEPAR has been a key promoter of these policies, and today we can proudly say that we were instrumental in the change and evolution of Mexico’s main industrial parks. Our initial goal was to develop the parks and hand them over to the various municipalities. They managed the parks and could charge for services provided. Around a decade or so ago, we also played a key role in the arrival of many foreign companies, firms that created their own industrial parks, transforming the model I have described. In 2012, we changed the bylaws of the company to allow us to set up Public-Private-Partnerships (PPPs).

What are the competitive advantages of FIDEPAR and the services the company offers?

We provide tax and legal security to companies. When partnering with FIDEPAR, the public sector becomes an ally in the process of obtaining permits, licenses, and certificates. We also organized commercial trips to attract foreign companies to set up operations in these industrial areas

How have FIDEPAR’s 108 industrial parks helped Mexico’s industry to move forward in the value chain?

Our work involves integrating major companies such as Nestle, Pfizer, Chrysler, and General Motors with the local production chain in order to establish a supply network. Our target is to develop micro-industrial parks, in which we integrate in one location the SMEs that are today part of the production chain. We also guarantee the support of the public sector and provide all the infrastructural and technical services in a leasing scheme. These leasing schemes move into ownership schemes after a certain period of time. We carry out such activity in sectors such as food and beverages, pharmaceuticals, and automotive. We plan to develop a training facility for SMEs as well as a research center within the food industry. We foresee two more micro-industrial parks for 2015, one for the pharmaceutical industry and the other in the automotive sector.

What are other sectors of growth potential in Mexico for the near future?

One of the key sectors of potential is aerospace, as we have the scope to develop more industrial infrastructure in this area. At the same time, the logistics industry offers many opportunities, particularly in areas such as Mexico City and its metropolitan area. We note that key road infrastructure projects such as the connection between Guadalajara and Mexico City are set to become a reality. Besides, it is important to highlight the road connectivity to the US and therefore Canada, which has also improved. We have also seen the increasing arrival of cargo companies as infrastructure has improved, and several companies such as FedEx have regional hubs in Mexico, located near airports. Recent developments in railway infrastructure have also been impressive. In this context, we are currently developing the logistics platform Arco 57, a PPP of more than $200 million, in which the Bank of New York is the main trustee.

What are some of the highlights of FIDEPAR in terms of social responsibility?

We have always prioritized the development of industrial parks in urban areas with many inhabitants, as they generate notable employment. We also have partnerships with universities to link the academic world with the productive chain. The state offers facilities for companies to hire recent graduates. We have programs with General Motors, Bosch and other companies and entities that require technical workers.