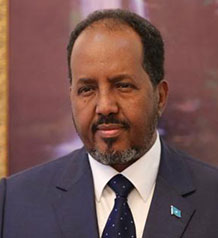 President, the Federal Republic of Somalia

HE Hassan Sheikh Mohamud is the 8th and current President of the Federal Republic of Somalia. He was elected on September 10, 2012. He is the founder and Chairman of the Peace and Development Party (PDP). He earned an undergraduate diploma in technology from the Somali National University, and a Master of Technical Education from Bhopal University (now Barkatullah University) in 1988. In November 2015, President Mohamud was awarded an honorary doctorate (DLit) from Barkatullah University, Bhopal, India. In April 2013, President Mohamud was named to the Time 100, TIME magazine’s annual list of the 100 most influential people in the world. His efforts in advancing national reconciliation, anti-corruption measures, and socio-economic and security sector reforms in Somalia were cited as reasons for the selection. President Mohamud’s term follows 22 years of civil war and conflict. He was one of the few Somali intellectuals to remain in the country throughout the civil war, working as a peace activist and education campaigner.

Share on:
"The UAE was one of the first major supporters of Somalia."

The UAE was one of the first countries to establish a permanent embassy in Somalia. How would you assess the UAE’s support for Somalia’s stability?

Somalia emerged from two decades of civil war and instability when the current government was democratically selected in 2012. My government faced the double challenge of needing to rebuild a country with no government or service institutions in place, whilst fighting a terrorist group. In three years, Somalia has managed to regain control of 80% of its territory, establish basic, but functioning government ministries, open schools and hospitals, re-establish trade links with various countries, set up a working Central Bank with transparent financial functions, and start to build back up critical pieces of infrastructure, like roads and ports. There is a long shared history between Somalia and the UAE; we have always traded and have shared interests in the stability of the Arab-African relationship. The UAE was one of the first major supporters of Somalia. The UAE saw the opportunity inherent in establishing a strong relationship with Somalia, initially responding to key humanitarian and development needs in an environment, which other donors saw as too risky. We salute the courage and humanity of the UAE governments in doing so. Since then, the UAE has provided a broad range of support to Somalia—but always on-ground, practical, and tangible initiatives that Somalis feel and see. The UAE has provided extensive military and security support through training Somali soldiers and providing a military training academy. It has supported the resumption of public services, in particular in the health sector, opening hospitals and health centers. It has reached out to Somalis in need of the very basics, building wells where terrorists had destroyed them and allowing families to access water for their children and their livestock. Dubai Ports has indicated significant interest in helping to establish three potential ports on the Somali coast. The UAE has been a significant force in the fight against piracy in Somali waters, with great success. Earlier this year, a UAE convoy was ambushed by al-Shabaab, but in testament to the UAE’s bravery and friendship, it has not been deterred from continuing to support the future peace and prosperity of Somalia.

In June 2015, Your Excellency presided over the opening of the UAE Hospital in Mogadishu. How is the UAE helping to develop Somalia’s health sector?

Yes, the first phase of the Sheikh Zayed Hospital was opened in May this year in Mogadishu. It will treat 300 patients, who will receive free medical care, and has specialized sections for day surgery and radiology. The second phase will see the hospital expanded with to a 200-bed capacity, with major surgery rooms and other specializations. It is equipped to the highest standards and will provide excellent medical services to Somalis.

Oil represents just 2% of Dubai’s GDP, with the bulk of the economy comprised of tourism, retail, real estate, trade and logistics, and manufacturing. In what other areas could Dubai’s expertise be of value for Somalia?

The UAE has set an extraordinary example of what can be achieved when a country combines visionary leadership, wise stewardship, and investment of its resources, and insists on a quality approach to all it does. Standing on the balcony at a hotel in Dubai recently and gazing over the expanse of a city that basically was not there 25 years ago is the best energizer anyone could wish for. Economic recovery and empowerment is the key issue for Somalia—not just in order to be able to finance our own development and future, but also because ensuring that people have access to meaningful work and get paid to do that work is the best investment a country can make in its security and stability. The UAE took a finite resource and turned it into something of infinite value. Somalia is blessed with a huge store of natural resources, from oil and gas to fisheries and livestock. We have the longest coastline in Africa, two rivers, and extensive agricultural land. We have excellent human potential: a very young, entrepreneurial population, and a highly educated and returning diaspora. When you combine our human resources with the natural resource potential of Somalia, I think there are unlimited possibilities ahead of us as a nation. So, apart from technical support in areas where the UAE has significant expertise, key for Somalia will also be learning from the UAE about rapid, self-managed, and self-funded economic development that suits the Somali context.

How do you see Somalia-UAE bilateral relations developing in the next decade?

The two countries enjoy a frank and full dialogue, and I am sure this will ensure that our friendship continues to grow. Insha’Allah, our strategic relationship will also become more balanced as Somalia continues to develop. I would hope that there will be less “take” in the relationship and more “give” from Somalia, not just in terms of trade and export, but also in shouldering regional responsibilities such as working to end extremism and positively contributing to the economic stability of the region.